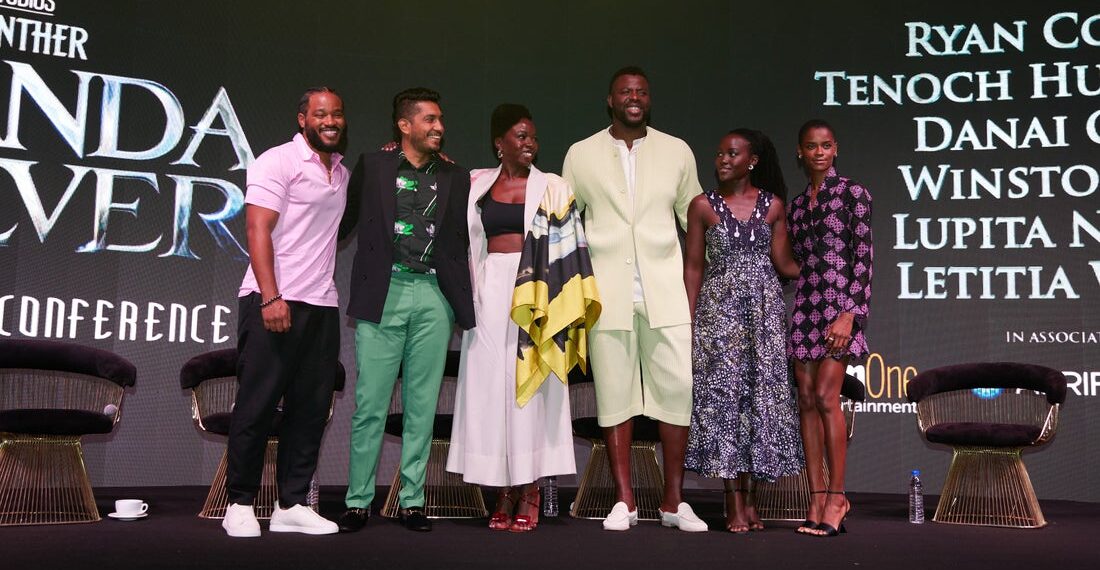 Letitia Wright at the Press Conference of Marvel Studios’ “Black Panther: Wakanda Forever” on 6 November 2022, in Lagos, Nigeria. (Photo by StillMoving.net for Disney)"

Over the weekend, Marvel Studios’ Black Panther: Wakanda Forever made history across the continent by shattering previous box office records.

In a statement on Monday, the producers said that, across all territories, the follow-up to Ryan Coogler’s 2018 hit Black Panther proved a draw for cinema-going audiences, with just under 300000 attendances reported.

In Nigeria, Black Panther: Wakanda Forever became the biggest industry opening weekend of all time with a box office tally of ₦240 million.

In East Africa, the film earned Kes 25 million, earning the titles of the biggest opening weekend box office of 2022 and the biggest post-pandemic opening.

In Lagos, the film director, Coogler, recipient of four NAACP Image Awards, four Black Reel Awards and an Academy Award nomination for Best Picture, justified why the cast and crew decided to kick off the continent-wide celebrations ahead of the film’s release in Nigeria.

Coogler, an African American, said Lagos has a lot of history and cultural significance for filmmakers. He also informed the ecstatic audience that he recently took a genealogy test that revealed his lineage.

The 36-year-old filmmaker said different parts of Africa influenced the film; however, the Nigerian culture exudes a specific energy that is hard to ignore.

Johannesburg also hosted the South African Premiere of the film on the 9th of November and welcomed Connie Chiume (Mining Tribe Elder “Zawavari”), Ernest Khalema (Language and Cultural Consultant on the film) and local artists from the soundtrack on the same day.

As the Wakandans strive to embrace their next chapter, the heroes must band together with the help of War Dog Nakia (Lupita Nyong’o) and Everett Ross (Martin Freeman) and forge a new path for the kingdom of Wakanda. Introducing Tenoch Huerta Mejía as Namor, ruler of a hidden undersea nation, the film also stars Dominique Thorne, Michaela Coel, Mabel Cadena and Alex Livinalli. “Black Panther: Wakanda Forever,” directed by Ryan Coogler and produced by Kevin Feige and Nate Moore, is now playing in cinemas everywhere.

The tyranny of the vocal minority, By Fredrick Nwabufo