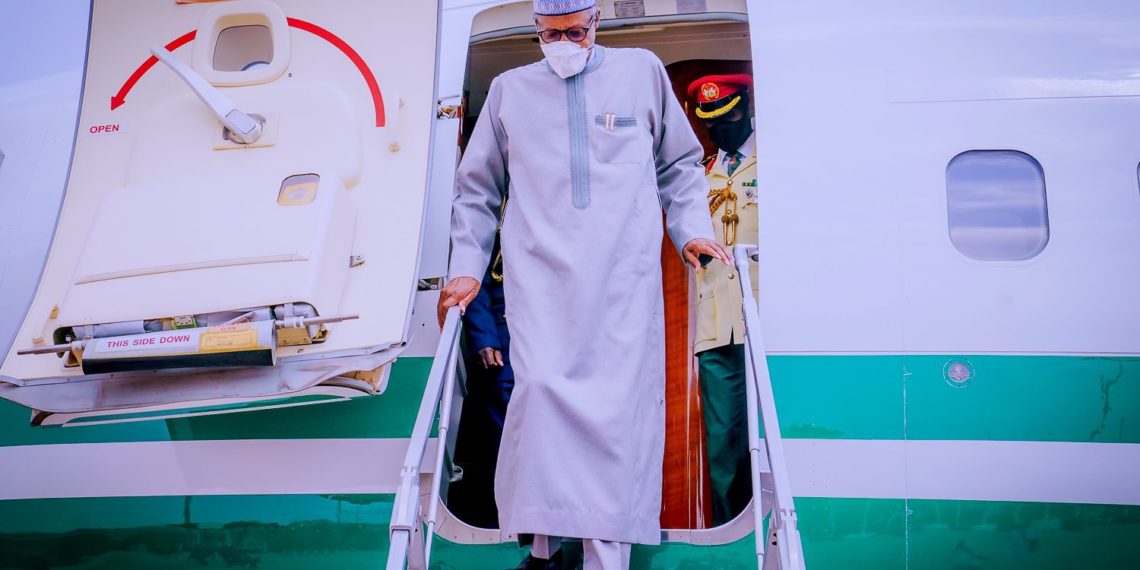 Buhari returns to Abuja after routine medical check-up in UK

While in the UK, President Buhari had on 10 Nov met with King Charles III at Buckingham Palace, United Kingdom.

President Muhammadu Buhari has returned to Abuja after a successful routine medical check-up in the United Kingdom.

The News Agency of Nigeria (NAN) reports that the Nigerian leader and members of his entourage arrived at the Nnamdi Azikiwe International Airport Abuja on Sunday evening.

While in the UK, President Buhari had on 10 Nov met with King Charles III at Buckingham Palace, United Kingdom.

NAN gathered that the Nigerian leader used the opportunity of the meeting to condole with the new king on the demise of his mother, Queen Elizabeth ll, and to also congratulate him on his confirmation as the new British monarch.

Mr Buhari departed Abuja on 31 October for London for a routine medical check-up.

Also during the week, President Buhari congratulated eight Nigerian-Americans on their victory in the United States midterm elections.

Mr Buhari, who prayed for their successful tenure in office, thanked them for their invaluable support and partnerships over the years, with groups affiliated with the ideals and objectives of Nigerians in Diaspora associations in the United States.

He also congratulated Team Nigeria on their spectacular performance in winning the Silver Medal at the African Continental Archery Championship in Pretoria, South Africa.

Also while in the UK, President Buhari extended birthday wishes to his nephew and close associate, Mamman Daura on his 83rd birthday on 9 Nov

The President, in a statement by his media aide, Garba Shehu on Wednesday in Abuja, described Mr Daura as a “remarkable gentleman, scholar and statesman.”

Body of lady who jumped into Lagos lagoon not recovered – LASEMA