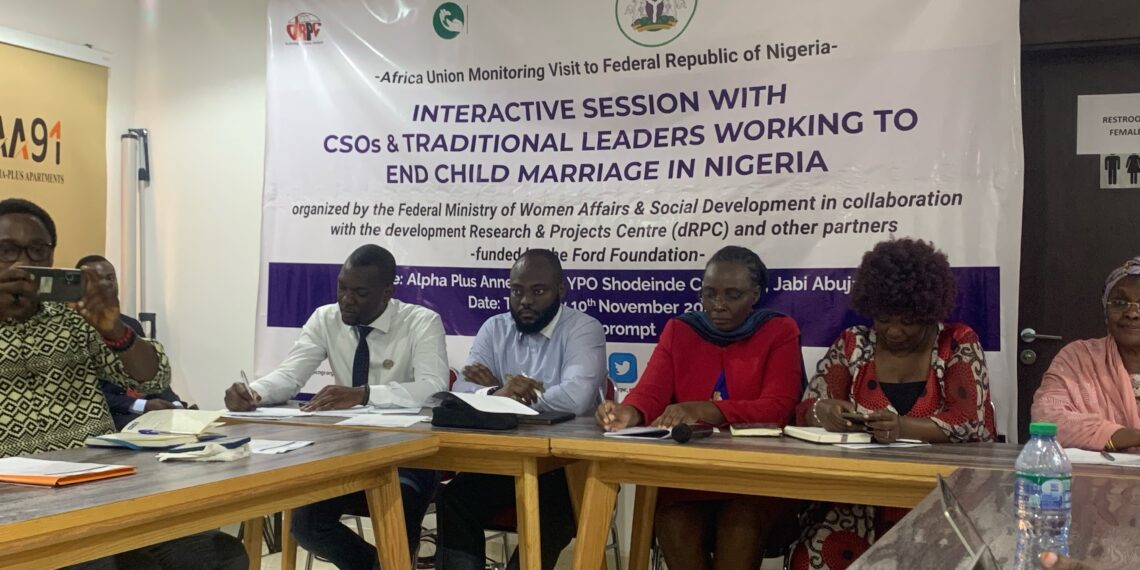 Nigeria presently accounts for an estimated 22 million child brides, a figure that may increase by seven million in the year 2050

It will be almost impossible for Nigeria to end child marriage unless it closes existing gaps in policy framework and implementation that protect the rights of children.

This was the conclusion reached on Thursday in Abuja by key stakeholders including Civil Society Organisations (CSOs) and traditional leaders working to end child marriage in Nigeria at a session organised by the Federal Ministry of Women Affairs and Social Development.

The programme was held in collaboration with the development Research and Projects Centre (dRPC) and other partners, and funded by the Ford Foundation.

Speaking at the event, the Co-chair of a coalition of CSOs to end child marriage in Nigeria, Carolyn Seaman, said there are existing gaps in the policy process that protects the rights of children from early marriage and other harmful practices, including gender-based violence.

Ms Seaman said until this is addressed, the country is far from ending the child marriage menace.

Various statistics have shown that child marriage which is defined as any marriage where at least one of the parties is under 18 years of age, is prevalent in many parts of the world.

Globally, more than 650 million women were married before their 18th birthday, according to a report by the United Nations Children’s Fund (UNICEF).

The report indicates that about 250 million of those married were coerced into the union before the age of 15. Although boys are also married as children, the practice is more prevalent among girls, who are said to be disproportionately affected.

Data from UNICEF shows that 58 per cent of girls in Nigeria get married before their 18th birthday and 18 per cent before they turn 15.

According to UNICEF, Nigeria presently accounts for an estimated 22 million child brides, a figure that may increase by seven million in 2050.

Ms Seaman said ensuring the domestication of the Child Rights Act (CRA) in all Nigerian states is a move towards ending child marriage.

She said some states are yet to accept and domesticate the Act which she said aims to protect children.

She lamented that some states where the Act is already domesticated, fail to “indicate the age a child should be married so we still have gaps with such laws.”

Ms Seaman said more effort is required to mobilise action around domesticating the Act to protect children across the country.

“Various efforts have been made and more states have signed the Act. But the concern now is the substance of the laws being signed, especially some of the northern states that are still consciously excluding the age of marriage,” she said.

A representative of Africa Union, Hermine Takam, said domesticating and implementing the Act will go a long way in Nigeria’s efforts to end child marriage.

Ms Takam said statistics provided at the ministry of women affairs prove that many girls forced into early marriages are not getting justice.

She said there must be a strong government-led response and strategy to address the problems.

Nigeria adopted the United Nation’s conventions on the rights of child in 2003. Following the adoption, child marriage became illegal and the minimum age of marriage increased to 18.

Though the legislation was put in place by the federal government, states are meant to adopt and pass the Act.

However, according to UNICEF, 31 out of 36 states in Nigeria have domesticated the Act but implementation is still very low as cases of child marriage are still high.

Ms Seaman said it is important for the government to work with CSOs and other stakeholders, to know who is accountable for certain aspects and keep track of progress.

She also calls for improvement on the coordination and harmonisation of efforts as stakeholders working in the space.

In his remarks, the Jakadan of Gusau, Abdullahi Maiwada, said marrying off a child at an early age has lots of health consequences.

Mr Maiwada said stakeholders across the country must come together to end child marriage.

He explained that collaborative efforts which involve working with traditional, religious, and community leaders are required to end child marriage.

“It is important to involve girls, women and their families in an all encompassing programme where there is enlightenment and awareness on the dangers of getting married at an (early) age,” he said.

How I wanted to be pastor – Tonto Dikeh