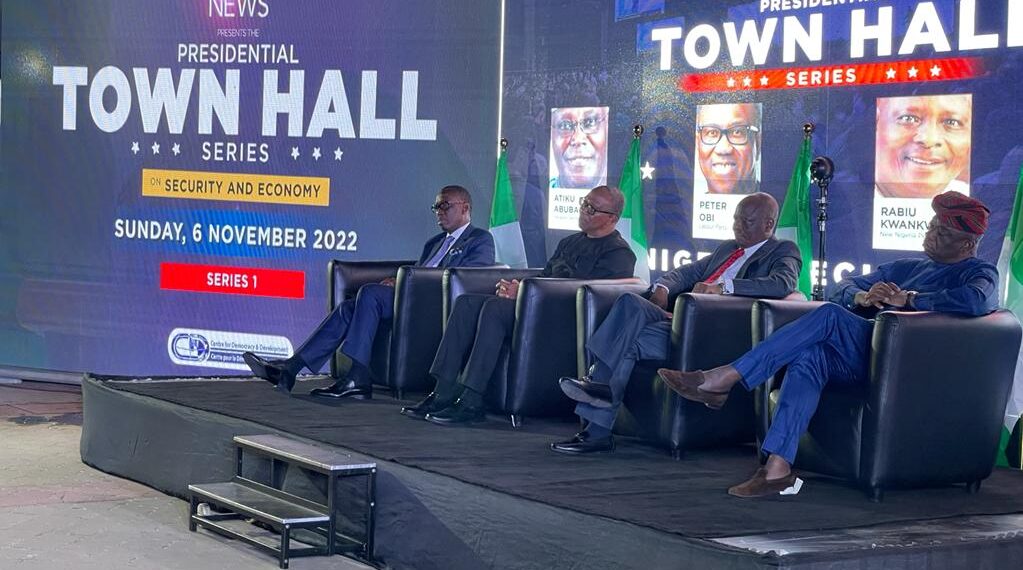 Apart from Messrs Tinubu and Atiku, the other two presidential candidates invited for the debate were Peter Obi of the Labour Party and Rabiu Kwankwaso of the NNPP

Two major presidential candidates, Bola Tinubu of the APC and Atiku Abubakar of the PDP, were absent at the presidential town hall meeting held Sunday evening.

While Atiku was represented at the event by his running mate, Ifeanyi Okowa, Mr Tinubu had no representation and was replaced by the organisers with another presidential candidate.

The event was organised by the Centre for Democracy and Development and Arise Television.

Apart from Messrs Tinubu and Atiku, the other two presidential candidates invited for the debate were Peter Obi of the Labour Party and Rabiu Kwankwaso of the NNPP. The last two were present for the debate.

The four men were selected based on the performance of their parties in an online survey by the organisers during which all the 18 political parties were listed in alphabetical order.

The result of this survey informed our decision to invite the highest four scoring parties – LP, APC, PDP and NNPP to the town hall, the organisers said.

However, hours before the event, Mr Tinubu was replaced with Kola Abiola of the Peoples Redemption Party who was present at the event.

The moderator, Reuben Abati, announced that Atiku was on his way back from Morocco and had communicated with the organisers to let Mr Okowa represent him. Nothing was said of the APC.

The organisers also did not state why the APC candidate was not present or represented at the event. They did not also explain why and how Mr Abiola was chosen as a replacement since his party did not come fifth at the poll. The fifth position was won by the African Action Congress (AAC), whose candidate, Omoyele Sowore, had complained about his exclusion from the debate.

The absence of Mr Tinubu or his representative stirred controversy on social media. Many Nigerians accused the ruling party candidate of avoiding critical public engagements.

Some attendees at the event in Abuja had also protested the presence of Mr Okowa, saying only the presidential candidates should be allowed to take part. However, the organisers said Atiku had communicated his absence to them and they had agreed that he would be represented by his running mate.