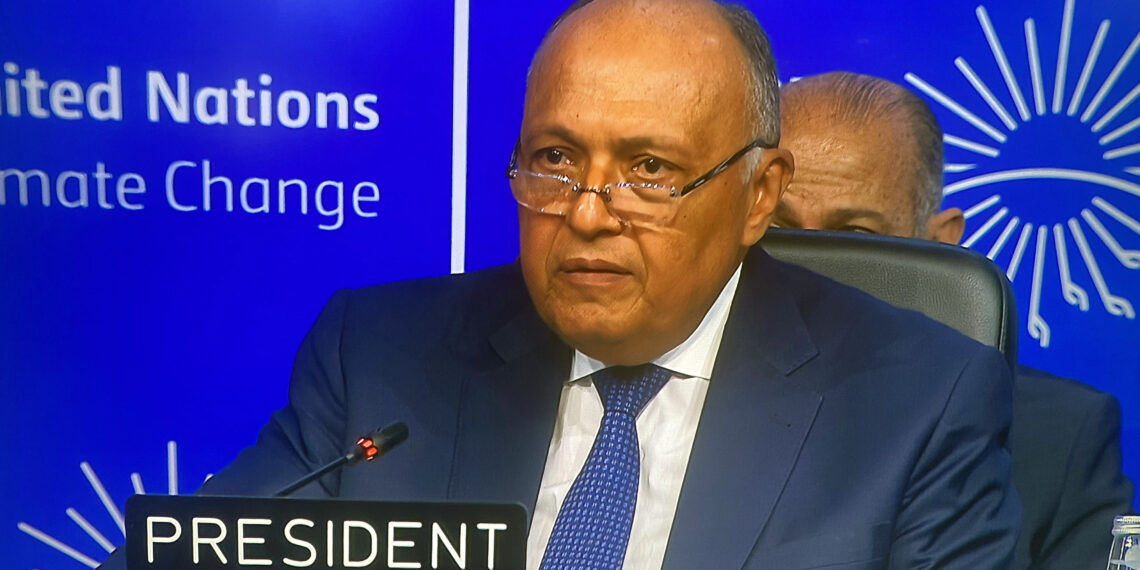 President of the 27th edition of the United Nations Conference of Parties (COP27), Sameh Shoukry.

An official said that the climate issues across the world have shown that inaction is myopic and can cause climate disasters.

President of the 27th edition of the United Nations Conference of Parties (COP27), Sameh Shoukry, has said that this year’s deliberations on climate issues must consider the needs of developing countries (Africa) because they are least responsible for emissions and are the most affected by the global impact of climate change.

Mr Shoukry made this statement while delivering his remarks after he was elected as the COP27 President by the Parties at the opening plenary in Egypt on Sunday.

“As a COP hosted in Africa, it must consider the needs of the developing countries and ensure climate justice through availing the appropriate finance and other means of implementation, as countries that are the least responsible for emissions are the most affected by climate change,” Mr Shoukry said.

He emphasised that despite the challenging economic and geopolitical factors, external circumstances should not be allowed to negatively affect the negotiating process.

The COP27 president called on countries to show faith in multilateralism over the next two weeks as they negotiate to deliver on the goals of the Climate Convention and the Paris Agreement.

At this year’s conference being held at Sharm-El-Sheikh, Egypt, more than 50,000 attendees are registered so far, organisers said, representing the largest in terms of attendees recorded in the history of the conference. The attendees are expected to participate in the plenary’s Blue Zone and thousands of others at the Green Zone.

At the meeting, the parties will take decisions necessary to promote the effective implementation of the convention, including institutional and administrative arrangements to transform climate negotiations into actions.

With 198 parties, the United Nations Framework Convention on Climate Change (UNFCCC) has near universal membership and is the parent treaty of the 2015 Paris Climate Change Agreement.

Speaking about challenges, the COP President said: “It comes as no surprise to anyone that the COP is being held this year in a world which is witnessing political turmoil that cast a long shadow on all our nations and has resulted in energy and food crises.”

However, he noted that these challenges should be no reason for delaying global efforts to fight climate change.

“It is inherent on us all in Sharm El Sheikh to demonstrate our recognition of the magnitude of the challenges we face and our steadfast resolve to overcome it,” Mr Shoukry said.

In his remarks, Mr Shoukry’s predecessor, Alok Sharma, said parties must be clear in their action towards meeting their NDC targets.

“We must be clear, as challenging as our current moment is, inaction is myopic and can cause climate catastrophe. We must find the ability to focus on one thing at once,” Mr Sharma said.

He said having more “Wake Up Calls” is what the world leaders need to plan effectively to mitigate Pakistan’s underwater, the worst flooding in Nigeria in a decade, the worst drought in 500 years in Europe, and other climate-related issues in China and other parts of the world.

EPL: Arsenal back at top after derby win over Chelsea