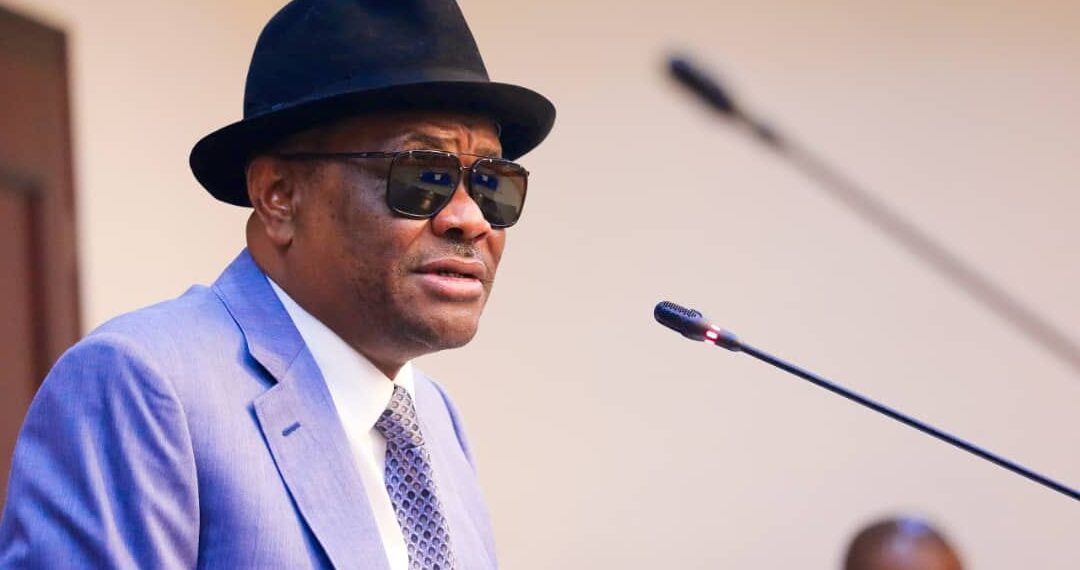 The Rivers governor says the PDP National Chairman, Iyorchia Ayu, cannot lead the party to victory in the 2023 elections.

Governor of Rivers State, Nyesom Wike, says it is becoming difficult to convince Nigeria that his party, the Peoples Democratic Party (PDP), can rescue the country.

Apart from the high rates of inflation, hunger and poverty, Nigeria is grappling with serious security challenges, ranging from Boko Haram insurgency in the North-east, violent Biafra agitation in the South-east, and kidnapping and banditry across the country.

Mr Wike said the marginalisation of the minority ethnic nationalities in the country caused much of Nigeria’s challenges.

He said it was becoming a “more difficult task” to convince Nigerians that the PDP can rescue the country.

Mr Wike said this on Tuesday in Port Harcourt, Rivers State, when the management of the New Telegraph newspaper visited him at the Government House to present its nomination of the Rivers governor as the Political Icon of the Year 2022.

The transcript of the meeting is posted on Governor Wike’s Facebook page.

“The problem in this country today is not only as a result of the banditry or kidnapping, no. Part of the issue that has to do with security is the issue of marginalisation.

“And I continue to tell our people or those who believe that they are dominant, you need peace for you to preside over those who you think do not have the number. You need peace. If there is no peace, it will be difficult,” the governor said.

Mr Wike and other governors who are his allies have been demanding the resignation of the National Chairman of the PDP, Iyorchia Ayu, to pave the way for a southerner to lead the party in order to achieve a “regional balance”.

Both Mr Ayu and the PDP presidential candidate Atiku Abubakar are from the north.

Mr Ayu has insisted he would not resign.

The PDP chairman said recently that he has the power to stop his political enemies, like the Benue State Governor, Samuel Ortom, from realising his ambition to go to the Senate in 2023.

While receiving the New Telegraph delegation, Mr Wike, once again, accused the PDP of violating its zoning principle, which would have had a southerner emerged as the party presidential candidate for the 2023 election.

He also accused the PDP leadership of not allowing for inclusivity in the party.

The governor said he and others would continue to demand Mr Ayu’s resignation, no matter the “blackmail” against them.

He said it is difficult for Mr Ayu to lead the PDP to victory in the 2023 elections.

“If you like, abuse us the way you want to abuse us, but we will stand by what we have said.

“If you say you will not relinquish that position to the south, no problems. Go ahead, but you can’t force us to do what we think is not right, we will not do it. So, this kind of man cannot, in all honesty, take this party to any victory. He cannot,” Governor Wike said of the PDP national chairman.

Governor Wike seized the opportunity to respond to Dele Momodu, the director, Strategic Communications of the PDP Presidential Campaign Council, who had warned the Rivers governors and his allies not to “cross certain lines” in their political disagreement with Messrs Atiku and Ayu.

“All these professional praise singers and beggars who have nothing to offer, just to rally round the presidential candidate, looking for what they will eat, are beginning to abuse people.

“Those who even contested the primary without one vote are those who are talking. A presidential aspirant becoming a spokesperson to a presidential candidate,” Governor Wike said of Mr Momodu.