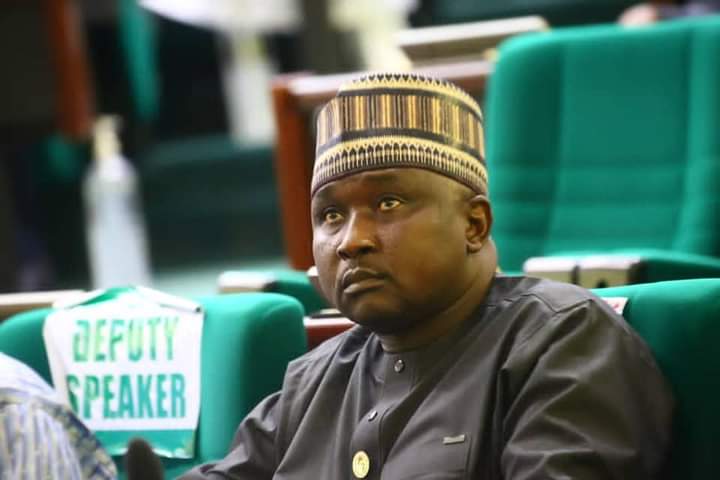 How Doguwa invaded our meeting, attacked me with teacup – Kano deputy governorship candidate

Mr Doguwa protested that federal lawmakers from the party are being sidelined by the leadership of the party in the state.

A fresh crisis erupted within the ruling All Progressive Congress (APC) in Kano on Monday after the Majority Leader of the House of Representatives, Alhassan Doguwa, allegedly attacked the deputy governorship candidate of the party, Murtala Garo, with a teacup during a meeting.

However, Mr Doguwa has denied that he attacked the deputy governorship candidate.

Mr Garo told BBC Hausa that the majority leader violently invaded a meeting at the deputy governor’s residence and made several “baseless accusations” against the gathering including the deputy governor, Nasiru Gawuna, who is also the party governorship candidate,

Mr Garo said the majority leader became violent and injured him with a teacup while he was trying to defend himself against some of the accusations.

“When he invaded the meeting, he started disagreeing that he was not involved in the meeting because it was a time of sharing money but when it comes to the difficult task of the party he will be invited,” Mr Garo said.

“But the deputy governor replied that they are not sharing money because nobody gives them money to share, he then asked why he was not invited despite his position as the majority leader, and that is how the argument turned into quarrel.

“Mr Doguwa accused me of destroying his banners which I denied, he grabbed a teacup in front of the deputy governor and threw it at me,” Mr Garo said.

However, in defence, Mr Doguwa said he was in the meeting to ask why federal lawmakers from the state were not invited but their colleagues at the state level and commissioners and others were in attendance.

Mr Doguwa said he was asking the deputy governor, but “this boy (Mr Garo) responded by saying so what if we did not invite you, he started abusing me in the process he broke a teacup and slipped into it injuring himself.”

“Contrary to what people are saying, I did not throw a teacup at him,” Mr Doguwa also told BBC Hausa.

PREMIUM TIMES learnt that the meeting ended abruptly while the governorship candidate, Mr Gawuna, pleaded for calm, and Mr Doguwa was told to leave the venue.

Meanwhile, Abba Anwar, Governor Abdullahi Ganduje’s spokesperson, said his principal was asked to intervene and call Mr Doguwa to order. He said his action is disrespectful to the office of the deputy governor

“An amalgamation of dozens of groups under the platform of Groups For Democracy, wrote a letter to the governor of Kano State, Dr Abdullahi Umar Ganduje urging him to call Alhassan Ado Doguwa, member representing Tudunwada/Doguwa federal constituency, to order, as his (Doguwa) political behaviours are allegedly becoming something else.

“They jointly argued that His Excellency should kindly call this man to order, else he will ditch the honourable position attached to his representation. And that could not be good for the party in his constituency, Tudunwada and Doguwa.”

The letter reportedly reads, “Your Excellency Sir this is not the type of person we need as a Speaker of the House of Representatives, in the next coming Assembly.”

“What transpired at the Deputy Governor’s residence, started by Hon Doguwa is nothing but disrespectful to our Governor’s choice of gubernatorial candidate and his running mate.”

“Not only at Deputy Governor’s residence, but Doguwa also did other things that are unbecoming of a political leader in some other places, recently and sometimes in the past.

“Must Doguwa go to a meeting he was not hitherto invited to at the Deputy Governor’s residence and wreak havoc?” Mr Anwar said in a statement sent to PREMIUM TIMES.

Nigeria got third of fintech funding in Africa, Middle East, Pakistan in 2021