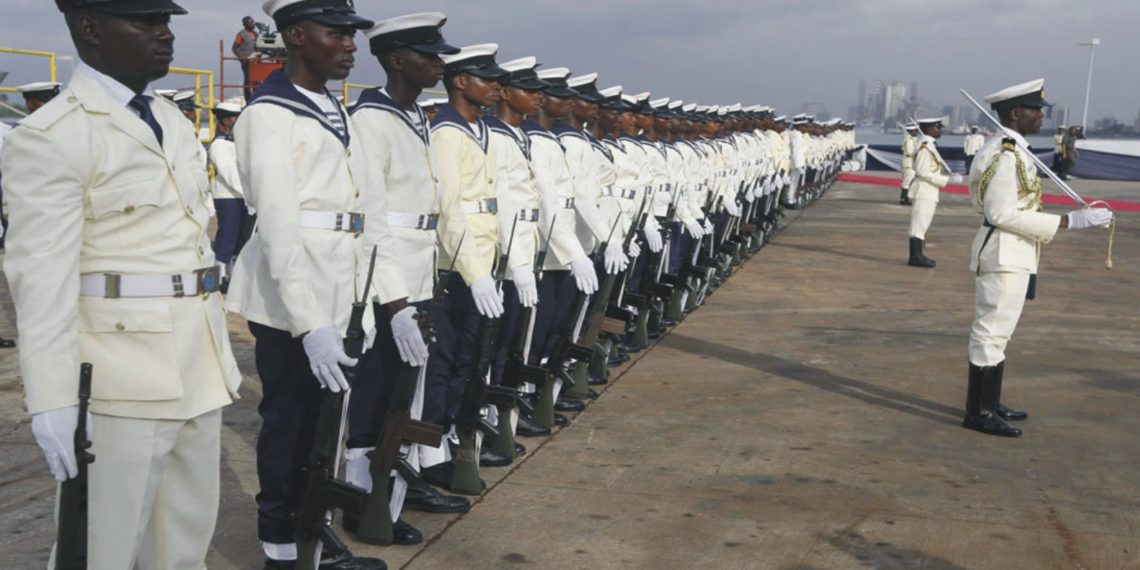 Officer of the Nigerian Navy

A navy official said the suspects did not have any authority or certificate from the appropriate authority to ply Nigerian waters.

The Nigerian navy, on Tuesday, handed over 22 suspected oil thieves to the Economic and Financial Crimes Commission (EFCC).

The suspects were handed over to the anti-graft agency alongside their two vessels which they allegedly used to steal crude oil.

The EFCC spokesperson, Wilson Uwujaren, disclosed this in a statement on Wednesday.

He identified the vessels as MT Platform and MV Caribbean Crest.

The Commanding officer of the navy, Forward Operating Base, Bonny, Rivers State, M.G. Munza, said one of the vessels, MV Caribbean Crest and her crew members were arrested on 15 February, according to the statement.

Mr Munza, a lieutenant commander in the navy, said they were arrested at the Bonny Fairway Buoy with an unspecified quantity of stolen petroleum product suspected to be automotive gas oil.

He said the MT Platform was intercepted on 8 June in the vicinity of the Bonny Anchorage for illegal dealing in petroleum products.

The navy official said the suspects did not have any authority or certificate from the appropriate authority to ply Nigerian waters.

The suspects and their vessels were handed over to Arasah Shaka, the Deputy Superintendent of the EFCC, Port Harcourt Zonal Command.

Mr Shaka thanked the navy for their efforts in safeguarding the nation’s territorial waters, adding that the EFCC was happy with them for their collaboration in fighting economic crimes in the country.

Oil theft, illegal refineries in the region, and their negative impact on the country’s economy have been a source of concern to the Nigerian government over the years.

Worried by the recurring crude oil theft, the federal government in August awarded a pipeline surveillance contract reportedly worth N48 billion per year (N4 billion per month) to Tantita Security Services Nigeria Limited to tackle the issue in the region.

The security company is operated by a former militant leader, Government Ekpemupolo, popularly known as Tompolo.

PREMIUM TIMES reported that Mr Ekpemupolo discovered at least 58 illegal points in Delta and Bayelsa States where crude oil is being stolen, barely two months after the company was awarded the multi-billion naira oil security contract in the region.