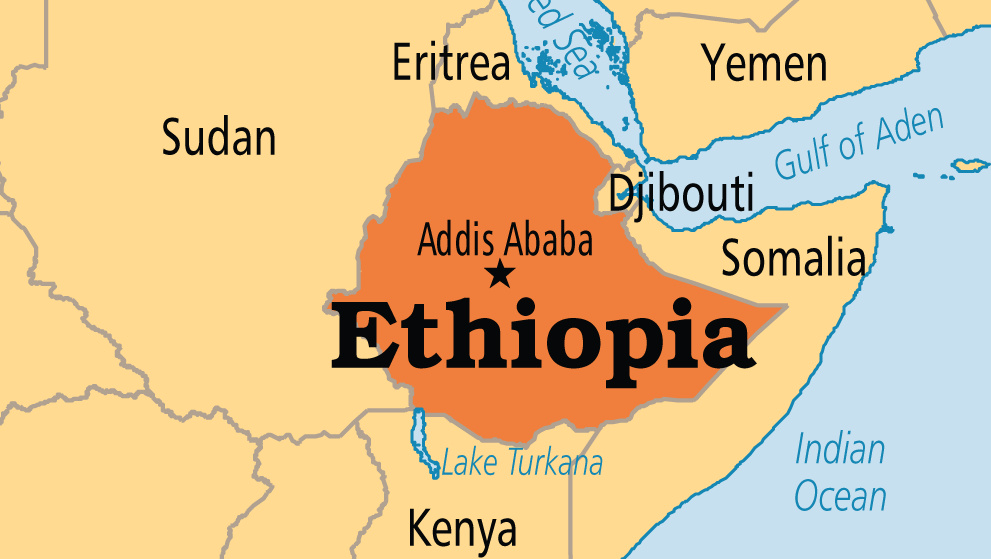 Ethiopia on Map used to illustrate the story.

"The suspension applies to nationals of all countries bearing Standard Passports, who seek entry into Ethiopia and not specifically targeted at Nigerians..."

The Government of Ethiopia has announced the suspension of visas on arrival for non-resident foreigners at all points of entry into the country, over security concerns and the current political situation in the country.

The Nigerian Ministry of Foreign Affairs on Thursday made the announcement while advising Nigerians bearing standard passports intending to travel to Ethiopia to obtain appropriate entry visas at the Ethiopian Embassy or an electronic visa (e-visa) through the country’s Immigration and Citizenship Service (ICS) portal at www.evisa.gov.et.

“The suspension applies to nationals of all countries bearing Standard Passports, who seek entry into Ethiopia and not specifically targeted at Nigerians, as reported in some quarters,” the ministry clarified.

According to the ministry, the Ethiopian authorities have explained that the measure is aimed at better border control of the movement of persons into Ethiopia in view of the ongoing armed conflict in the Northern part of the country.

The measure is said to be temporary, pending improvement in the security situation in the country and not a replacement of Ethiopia’s open visa policy.

Additionally, those transiting through Bole International Airport, Addis Ababa, Ethiopia to other destinations or intend to briefly stop over would require a valid entry visa to enable them access hotel facilities in the city or else would be obligated to remain in the airport pending their connecting flight.

The ministry also advised Nigerians against tarnishing the image of the country by engaging in actions that violate visa rules in Ethiopia.

“…the Nigerian Government has noted the concern expressed by the Ethiopian authorities over the abuse of the country’s visa policy by some Nigerians who enter the country on tourist visas and remain even after the expiration of their visas, engaging in unwholesome activities.”

It encouraged guilty persons to turn a new leaf and take advantage of the opportunity provided by the Ethiopian National Security Agencies to participate in the ongoing registration of undocumented migrants to avoid unpleasant situations.

For two years, the government of Ethiopia and forces in its northern Tigray region have been at loggerheads, throwing the country into political and economic instability

According to the UN Refugees agency (UNHCR), Ethiopia is the third largest refugee-hosting country in Africa, home to over 924,000 refugees and asylum seekers—mainly from South Sudan, Somalia and Eritrea.

Millions of Ethiopians are still in desperate need of humanitarian aid and protection. An estimated 9 million people across Ethiopia’s conflict-stricken regions of Tigray, Afar and Amhara lack access to adequate food.

In Tigray, nearly 40 per cent of the population is suffering from an extreme lack of food. In addition to severe food insecurity, gender-based violence has increased significantly but women and children lack access to proper healthcare, social welfare and justice services, the UN has said.

As the conflict continues in the Tigray region, international NGOs and aid groups face difficulties in delivering critical humanitarian aid and vital services. A shortage of fuel, supplies and cash has forced several aid groups to reduce or cancel distributions of food, water and medicine.

However, there are new hopes that the crisis may soon come to an end as both sides have agreed to an African Union-mediated dialogue in South Africa this weekend, Voice of Africa reported.

The talks would come after a series of airstrikes in Tigray, including one on Tuesday that killed more than 50 people when it hit a school sheltering war-displaced people, aid workers said.

According to the AU Commission, the talks will be led by AU special envoy Olusegun Obasanjo, who will be supported by former South African Deputy President Phumzile Mlambo-Ngcuka and former Kenyan President Uhuru Kenyatta.

The Tigray authorities, according to VOA, have criticised Mr Obasanjo’s role as a mediator, on grounds of a perceived close relationship with the Ethiopian prime minister.

They have insisted that international officials participate in cease-fire discussions as “observers” and “guarantors.”