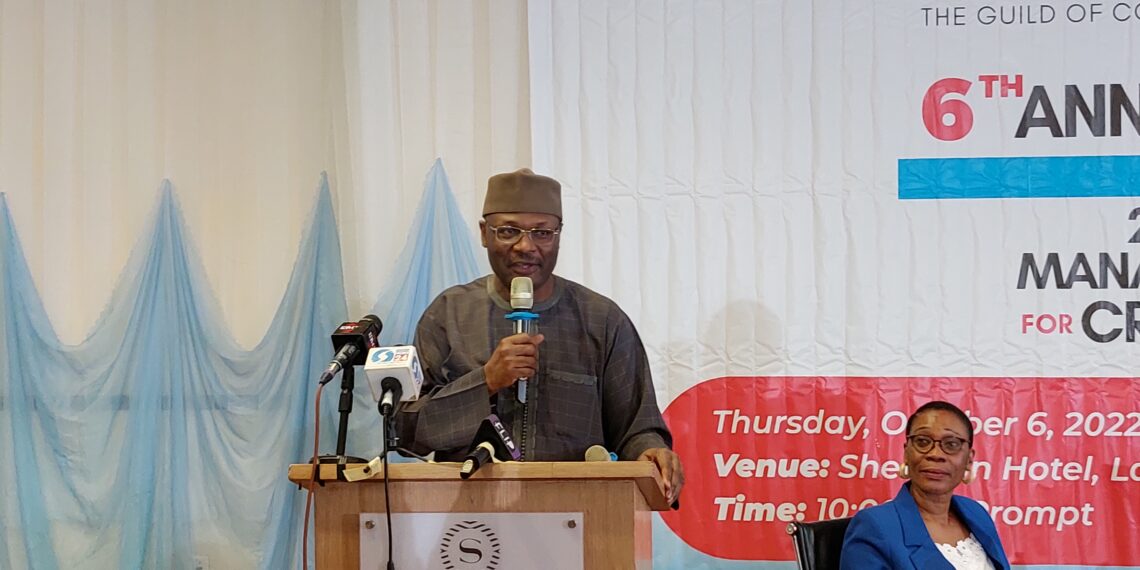 Mr Yakubu said "votes will continue to count and will be the sole determinant of the electoral outcome.”

The chairperson of the Independent National Electoral Commission (INEC), Mahmood Yakubu, on Thursday, said the electoral umpire would deploy appropriate technology “to protect the sanctity of the choice made by Nigerians at the polls” at the 2023 general election.

Mr Yakubu spoke while delivering the keynote at the sixth annual conference of the Guild of Corporate Online Publishers (GOCOP) in Lagos.

The event had the theme ‘2023 Elections: Managing the Process for Credible Outcome.’

Mr Yakubu said the technology will be deployed from voter registration to voter accreditation and result management.

He added that the deployment of the Bimodal Voter Accreditation System (BVAS) with its dual fingerprint and facial biometric accreditation process has ensured that only genuine voters are accredited to vote during election.

“This has curtailed the incidence of multiple voting and other sharp practices associated with voter accreditation during elections,” he said.

“The BVAS has come to stay and will be the only means by which voters will be accredited in the 2023 General Election.”

He further noted that the introduction of the INEC Result Viewing (IReV) portal has made the result management procedure more transparent and polling unit results will be uploaded to the portal in real-time in the 2023 General Election.

“The 2023 General Election is fast approaching.

“It is now 141 days to Election Day. Polling Units will open at 8.30 am on Saturday 25 February 2023 for national elections (Presidential and National Assembly) and the same time on Saturday 11 March 2023 for State elections (Governorship and State Assembly).

“Therefore, the tempo of political activities has increased as parties, candidates and their supporters commence campaigns, rallies, processions and media advertisements to canvas the support of the electorate.”

He reiterated INEC’s commitment to credible elections, noting that “Votes will continue to count and will be the sole determinant of the electoral outcome.”

He urged political parties and candidates to carefully study the Electoral Act 2022 and familiarise themselves with their obligations and the penalties under the law.

The INEC boss reiterated the importance of the commission’s partnership with the media in ensuring a credible outcome in the electoral process and the battle against fake news.

“As the Commission is doing its best to ensure a credible process, we also appeal to the media for a continuous partnership. Managing the electoral process for a credible outcome is the responsibility of all of us.

“As campaign activities get underway, the media will continue to play an important role. A lot of the activities will take place in the media of which the new media is a critical player.

“We must continue to work together against the spread of fake news, misinformation and disinformation that seek to create or exacerbate tension or de-legitimise processes and outcomes.

On fake news, he said “GOCOP must lead a network or alliance of stakeholders to curb fake news engineered by unpatriotic individuals. Fake news is a threat to national security and all hands must be on deck to check it.

GOCOP should come out strongly in the battle against fake news which is a challenge to the electoral process going forward.

He assured that at INEC, “the national interest comes first. We shall not pander to any partisan whims and caprices. We pledge to discharge our duties with the highest sense of responsibility and integrity.”

The chairperson of the occasion, the Founder of the Centre for Alternative Policy Perspectives and Strategy (CAPPS), Umar Ardo, in his opening remarks said the deployment of technology in the electoral process will eliminate rigging and irregular voting.

“For the first time in the history of this country, we have an INEC leadership that will conduct two consecutive elections,” he said.

“We’ve never had it before. And so the experience from the previous election will be deployed in the next election and will help enhance the election which we also saw in the employment of technology to give credible elections.

“The employment of technology to give credible elections will mean that certain key rigging schemes employed by politicians, especially incumbents, are going to be eliminated. we are going to eliminate multiple voting,” he said.

He said the role of the media in helping to create a conducive environment for election is very critical, especially the social media.

“When online publishing started, people will just write whatever they want and I’m happy with the role of GOCOP, some of the problems will be addressed.”

Chichi Aniagbolu-Okoye, from Ford Foundation, commended INEC for deploying technology to promote transparency and accountability in the electoral process.

In her welcome address, the GOCOP President, Maureen Chigbo, said if the stages that form the electoral processes, such as the recruitment of adhoc staff and printing of ballot papers are not well handled, they could undermine the electoral outcome.

“Any stage of these election processes that are not handled well could undermine the electoral outcome,” she said.

“That is why as we journey towards the 2023 election, bearing in mind the concerns of the people, we felt that as a body of watchdogs of the society we should use our platform to better educate and inform the electorate albeit the people of Nigeria by getting the facts about the state of affairs with the planning and execution of the 2023 election.

“On the other hand, the interventions of the panellists and contributions from the floor will also guide the electoral umpire in firming up preparations and the remaining processes for the election that has to do with security, law, and observer missions involving civil society organisations as represented in the carefully selected panellists.”

The event also featured the induction of 13 new members of GOCOP selected from 38 applications received.

According to the president, “GOCOP was borne out of the growing need to ensure that online publishers uphold the tenets of journalism in doing their jobs.”

A former inspector general of police, Solomon Arase, noted that the role of the police in elections can be categorised into three: the pre-elections, the election Day and the post-election.

Speaking on the role of the police, he said they would ensure they escort ballot material to various polling units, ensure that the electorates, adhoc staff and everybody is safe during and after the elections.

He also recommended that the police should have someone knowledgeable and good at communication to manage the communication desk and also that INEC should prosecute offenders according to the law.

Why Wike, Makinde, others met in Lagos – Bode George