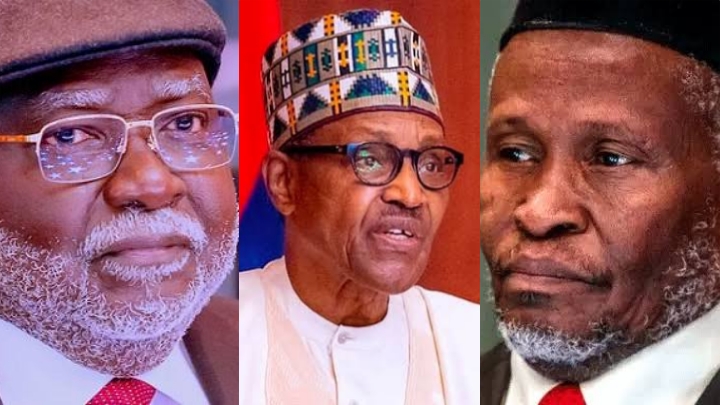 The lawyer threatened to institute a legal action "to seek redress" if President Buhari goes ahead to confer the national honours on the CJN, Olukayode Ariwoola, and his predecessor, Tanko Muhammad.

A lawyer, Timipa Okponipere, has opposed the scheduled conferment of national honours on the Chief Justice of Nigeria (CJN), Olukayode Ariwoola, and his immediate-past predecessor, Tanko Muhammad.

The Port Harcourt, River State-based lawyer similarly threatened to institute a legal action at the ECOWAS Court of Justice “to seek redress” if his objection to the conferment of the national honours on them was overruled.

Both men are billed to be conferred with the Grand Commander of the Order of the Niger (GCON) by President Muhammadu Buhari at the investiture ceremony scheduled to hold on 11 October at the State House in Abuja.

They are among the 437 nominees for the 2022 National Honours Award.

Mr Okponipere’s objection to the conferment of the awards on the jurists is contained in an affidavit he deposed to at the Federal High Court in Port Harcourt.

His declaration is titled, ‘AFFIDAVIT OF STRONG OBJECTION TO THE CONFERMENT OF National HONOURS AWARD GRAND COMMANDER OF THE ORDER OF NIGER (GCON)’.

He deposed to the affidavit bearing the stamps of the court’s cashier and commissioner of oaths on 4 October.

The declarant’s grouse against Mr Muhammad and his successor, Mr Ariwoola, is their alleged failure to address some petitions he sent against a now retired Justice of the Supreme Court and some lawyers.

Mr Okponipere called on President Muhammadu Buhari to suspend the conferment of the national honours on Messrs Ariwoola and Muhammad indefinitely.

He stated that this is what Mr Buhari would do if he “was truly sincere and committed to fighting corruption in the Judicial Arm of Government in Nigeria”.

The deponent sent a copy of his affidavit of objection to the Minister of Special Duties and Inter-Governmental Affairs with a cover letter also dated 4 October threatening to go to court if his request was not acceded to.

“Please, take notice that I shall seek redress of the ECOWAS COURT OF JUSTICE if my objection is overruled and both men are subsequently conferred with the Award,” his letter read, in part.

The letter is copied to Mr Buhari, the National Council of State and the President of the ECOWAS Court.

Mr Ariwoola took over as the CJN, initially in acting capacity in June, following the abrupt resignation of Mr Muhammad on health grounds.

The former CJN left office at a chaotic time in the life of the Supreme Court. His resignation came amid ripples created by a protest letter sent to him by his 14 other colleagues on the Supreme Court bench led by Mr Ariwoola, complaining about his handling of the court’s affairs.

Mr Okponipere’s grouse against Mr Muhammad was his alleged refusal to act as the Chairman of the NJC on a petition against a recently retired Justice of the Supreme Court, Mary Odili.

Mrs Odili was the second most senior judge of the court until her retirement earlier in the year.

He did not disclose his allegations against the lawyers.

But he said his petition against Mrs Odili was about her refusal to withdraw from a five-man panel of the Supreme Court that decided a matter between him and Rivers State government.

He said the matter decided by the Supreme Court on 8 February 2013 concerned Mrs Odili’s husband – Peter Odili, a former governor of Rivers State.

He said Mr Odili’s name was mentioned at least 50 times in the records of appeal transmitted to the Supreme Court regarding the matter.

The matter, he said, involved the seizure of his properties by the Rivers State government.

He referenced a letter dated 24 August 2020 in which Mr Muhammad acknowledged the receipt of his petition dated 17 July 2020 against Mrs Odili and assured that “action is being taken”.

He said he “continued to suffer until this day the consequences” of Mr Muhammad’s alleged “failure or refusal to perform his constitutional responsibility”.

He said he did not believe Mr Muhammad was sufficiently noble, statesmanlike, nationalistic, broadminded and patriotic enough “to warrant the conferment of the nation’s second highest National Honours Award on him.”

The lawyer urged the CJN to act on his complaints against Mrs Odili and Messrs Daudu, Ukala, Lawal-Rabana and Osigwe.

His grouse against Mr Ariwoola is that he equally refused to act on his petitions since becoming the CJN and simultaneously the chairman of NJC months ago.

Mr Okponipere also referenced a letter dated 9 August 2022 responding to one of his letters to Mr Ariwoola.

The letter informed him that the NJC could no longer hear his petition because Mrs Odili “had retired from office as a judicial officer, as such, he is no longer under the disciplinary control of the National Judicial Council.”

“Consequently, the Council is unable to deal with your petition as it lacks the constitutional powers to take action against a retired Judicial Officer, please.” the letter from the CJN concluded.

He stated in his affidavit that Mr Ariwoola’s alleged failure “to perform his constitutional responsibility” does not warrant the conferment on him of the prestigious National Honours Award of Grand Commander of the Order of the Niger (GCON), being the nation’s second highest honour.”

Festus Akande, Supreme Court’s Director of Information, said he was not aware of Mr Okponipere’s affidavit of objection, so he could not comment on it.