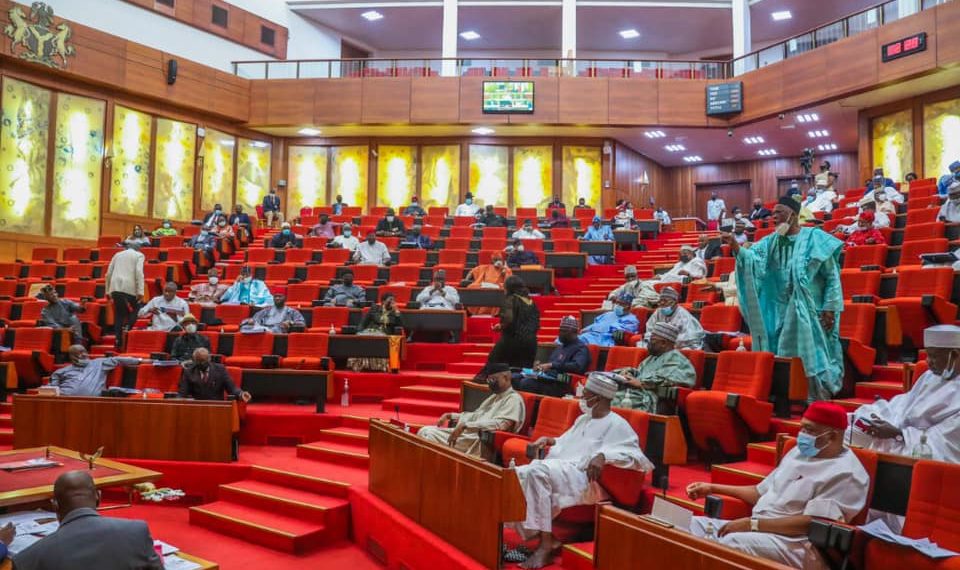 The 2023-2025 MTEF/FSP was approved after the senators considered and adopted recommendations of the Senate Joint Committees on Finance and National Planning.

The MTEF/FSP is a document that contains parameters upon which the annual budget is prepared.

While approving the MTEF/FSP on Wednesday, it pegged the crude oil benchmark price at $73 per barrel for 2023 – higher than the corresponding benchmark of $57 for 2022.

The Senate resolved that the oil price of $73 per barrel of crude oil be approved as a result of continuous increase in the oil price in the global oil market and other peculiar situations such as continuous invasion of Ukraine by Russia as this will result in savings of N155 billion.

The lawmakers also pegged the exchange rate at N437.57 with continuous engagement between the Central Bank of Nigeria and Federal Ministry of Finance, Budget and National Planning with a view of bridging the gap between the official market and parallel market.

The 2023-2025 MTEF/FSP was approved after the lawmakers considered and adopted recommendations of the Senate Joint Committees on Finance and National Planning.

Earlier, the Minister of Finance, Zainab Ahmed, said the federal government will borrow over N11 trillion and sell national assets to finance the budget deficit in 2023.

She also said the government’s budget deficit is expected to exceed N12.4 trillion should it keep the petroleum subsidy for the entire 2023 fiscal cycle.

She proposed two options for the lawmakers to consider for the 2023 budget.

First, the deficit is projected to be N12.4 trillion in 2023, up from N7.35 trillion budgeted in 2022, representing 196 per cent of total revenue or 5.50 per cent of the estimated GDP. In this option, she said, the government would spend N6.72 trillion on subsidy.

The second option, she explained, involves keeping subsidy till June 2023 and this scenario will take the deficit to N11.30 trillion, which is 5.01 per cent of the estimated GDP. In this option, the PMS subsidy is projected to gulp N3.3 trillion.

The Chairman of the committee, Adeola Olamilekan, who presented the report, said the committee recommended the second option suggested by Ms Ahmed.

This means, the federal government will service subsidy until July 2023.

The projected new borrowings of N8.4 trillion (including Foreign and domestic Borrowing) was approved – subject to the approval of the borrowing plan by the National Assembly.

Other approved parameters include:

* A retained revenue of N9.352 trillion as result of increase in the benchmark as the ceiling oil subsidy to the year in review.

The Committee also recommended that the cost of petroleum subsidy be capped at N3.6 trillion accordingly.

In his presentation, Mr Olamilekan said all relevant agencies of the governments will be required to take necessary action to keep the petroleum subsidy cost to government within a N1.7 trillion ceiling in 2023.

This, he said, will save about N737.3 billion which should be used to reduce the fiscal deficit of N11.3 trillion of the government as contained in the MTEF/FSP.

The fiscal deficit of N11.3 trillion, he said, should be reduced with the savings from the subsidy regime of N737.31 billion to N10.5 trillion.

“The Committee recommends significant reduction in both waivers and tax exemptions of corporate organisations to cushion the effect of budget deficit,” he stated. “And that all revenue generating agencies should reconcile their accounts with the Fiscal Responsibility Commission and the Office of the Accountant General of the Federation (OAGF), the report of which should be submitted to the Committee of Finance for consideration and approval.”

The lawmaker said there should be a common electronic platform for reconciliations amongst the government MDAs, OAGF and Fiscal Responsibility Commission for effective monitoring and remittances.

“That there should be strict compliance with the Constitution, Fiscal Responsibility Act and other extant laws by all agencies of the Government with regards to revenue remittances. And relevant oversight committees of the National Assembly are at liberty to remove recycled projects in their budget proposal during the Committees’ budget defense.”

He suggested that 10 of the 63 GOEs (government owned enterprises) be placed on cost of collections to serve as a test case for other GOEs which can be added in the future.

The suggested GOEs are the NCC, CAC, NPA, NIMASA, NUPRC, FIRS, CUSTOMS, NMPDRA, JAMB, NAFDAC, with immediate effect with the proposed finance bill 2023 coming up with the amendment of the existing Act of the above mentioned agencies.