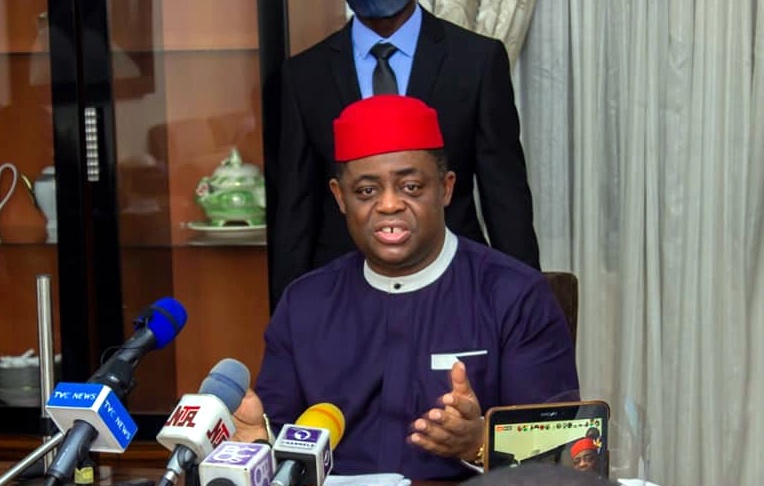 A chieftain of the All Progressives Congress (APC), Femi Fani-Kayode, has asked the security agencies to arrest the National Chairman of the Peoples Democratic Party (PDP), Iyorchia Ayu, and other members of the National Working Committee over allegations of corruption rocking the party.

The former aviation minister took to his social media accounts— Facebook and Twitter, on Monday, to call for the arrest and prosecution of the opposition politicians.

In a tweet on his verified handle, Mr Fani-Kayode, who is a member of the campaign council of Bola Tinubu, wondered why the security agencies have not arrested Mr Ayu and the members of the NWC days after the allegation was made.

The main opposition party is currently enmeshed in allegations of corruption in the past few weeks following an allegation of bribery by Governor Nyesom Wike of Rivers State against Mr Ayu.

Mr Wike, who is leading the “Ayu must go” campaign, had during an interview alleged that the former senate president collected N1 billion from an unnamed person in Lagos.

“Some of the governors can tell you. Will he (Ayu) deny the fact that he didn’t collect N1 billion from Lagos? Let him deny it, I will tell him who gave him the money, not from the Lagos State Government. The money was given to him in Lagos,” he said.

A few days after the allegation by Mr Wike, several NWC members returned about N120 million sent to them by the party.

Most of the party officials involved are believed to be sympathetic to Mr Wike.

The PDP later confirmed that the money was sent to the officials but it was not a bribe.

The party’s National Publicity Secretary, Debo Ologunagba, in a statement claimed that the amount was housing allowance paid to the officials.

“The Housing Allowance being referred to went through the due process of the party,” Mr Ologunagba stated in the statement.

Mr Fani-Kayode, who is facing prosecution for alleged money laundering, accused the leadership of the opposition party of sharing money like “Father Christmas”.

He urged other members of the NWC to return whatever money is with them before the commencement of an investigation.

“Why have the security agencies not rounded up the PDP National Chairman and all the other members of their NWC and questioned them about the misappropriation and diversion of the one billion naira that Wike told us about?

“Are the leaders of the opposition above the law?

“Never have we seen party officials sharing money amongst one another like Father Christmas as the leadership of the PDP has just done.

“I advise those on their NWC that have not done so already to return the money they collected because a criminal investigation has already begun,” he tweeted.

“There is no political party that has a National Chairman and National Working Committee (NWC) that is as transparent, accountable and responsible as the NWC of the APC under the distinguished leadership of Senator Adamu Abdullahi.

“Unlike the NWC of PDP they did NÒT steal one billion naira to share amongst themselves in the name of housing allowance,” he wrote on his Facebook page.

Mr Fani Kayode made the claim despite Mr Adamu’s removal as the chairman of the Northern Senators Forum by his colleagues in 2018 over alleged financial mismanagement and other related matters.

Mr Adamu later claimed that his removal was political.

Also, in 2010, Mr Adamu, who was governor of Nasarawa State from 1999 to 2007, was arraigned by the Economic and Financial Crimes Commission (EFCC) with 149 counts of corruption at a Federal High Court in Lafia, the Nasarawa State capital.