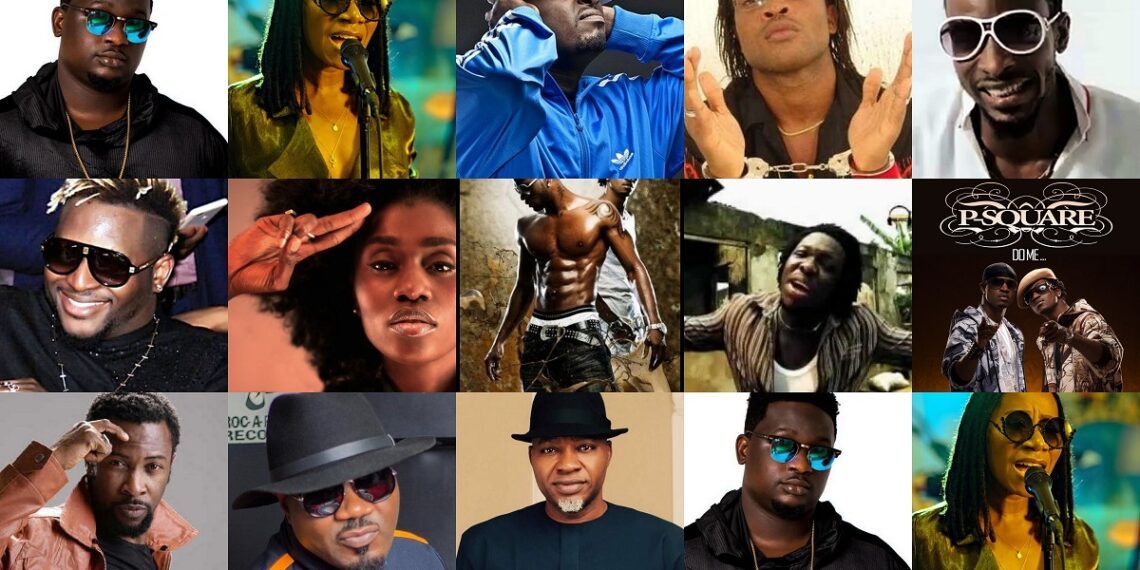 15 years ago, Nigerian music was witnessing a transformation. The year was 2007, and several albums were topping the charts with multiple hit songs.

The year was 2007, and several albums were topping the charts with multiple hit songs.

A new sound was born from Wande Coal to P-Square, Asa, Ruggedy Baba and others.

Over a decade and a half later, some of these songs are still relevant.

Staying loyal to sound is one factor that drives the music industry. That is why it is not uncommon to see songs from different generations still having relevance among a particular demography.

The older generation always feel they had better sound; hence they tend to wonder “what kids these days are listening to.”

Unlike what obtains today, the year 2007 and its era gave Nigerians more conscious music.

Asa, Timaya, African China and others sang lyrics that made people think critically about the Nigerian situation.

That era also had tasteful love songs driven by artistes like P-Square and Wande Coal.

True to its nature, the music of every generation influences the slang, fashion, movements of the time and sometimes politics of the era.

Reekado Banks’ Ozumba Mbadiwe, for instance, will always be a reminder of the unfortunate incidents that took place on 20 October 2020, and that is a very recent reference.

Almost 30 years after the annulled June 12 elections of 1993, the jingles that the undeclared winner, MKO Abiola, used in his campaigns still surface once every while, drawing up deep-seated nostalgia.

As has been established, Nigerian music witnessed a lull in the 90s.

By the end of the 90s and early 2000s, the sounds from the country began to witness an awakening.

However, from 2003 to 2004, Nigerian music witnessed a renaissance, birthing what has become a global phenomenon today.

By 2007, Nigerian music was the toast of every African country and beyond the continent.

Because of it, the Nigerian brand of pidgin English, its slang and sayings are spoken in most African countries.

Below, in no particular order, are some of the songs released in that era.

In 2004 when the singing duo Peter and Paul Okoye, aka P-Square, gained fame across the nation, they didn’t slow down their sound.

‘Do Me’ official video, released on 28 May 2011, was more notable because it changed how music videos were made in Nigeria.

The song featured singer, Waje and was said to have given her a breakout opportunity.

‘Cry’ featuring Nnena is rated as Mode 9’s most successful track yet. It is the second track of the rapper’s 2007 album, ‘E’ Pluribus Unum,’ released under Questionmark Entertainment.

The track fetched the artiste numerous awards and accolades, a feat he has not been able to repeat to this day.

Fire on the Mountain – Asa

This song was viewed then as an awakening to a looming disaster.

In ‘Fire on the Mountain’, Asa sang about the government strong-arming its citizens, war-fueled illegal mining, parental sexual abuse and other topics most are afraid to broach.

Interestingly, the song generated a bit of controversy in 2022 when Asa performed it at the unveiling of the Nigerian National Petroleum Company Limited (NNPCL)in President Muhammadu Buhari’s presence.

‘Dem Mama is one of Timaya’s most dynamic songs off his ‘True Story’ album. The Bayelsa-born artiste sang about the military invasion of the Udi community in 1999.

In the sad incident, which was said to have been carried out on the orders of the government, many lives were lost.

‘Oruka’ is another hit song that ruled the airwaves in 2007.

The song is part of the highlife/pop singer Sunny Neji’s ‘Unchained’ album.

Shortly after its release, it became a Nigerian wedding anthem that year and years later, as it was the highlight of wedding receptions.

Its opening line is drawn from the Bible passage, which says, “he who finds a wife has found a good thing.”

Although released in 2007, African China sang about myriad issues in this song, including the annulled June 12, 1993, elections.

He also sings about the Sharia crisis in Zamfara back then, killings that took place by the dreaded OPC, the cannibal – Clifford Orji and other issues.

The song by the veteran singer quickly became a national anthem.

With ‘Ololufe’, Wande Coal submitted his CV to the Nigerian music-loving audience.

A love song rendered mainly in the Yoruba language, and the piece etched the singer in the Nigerian music hall of fame.

It was a part of Mo’ Hits 2007 compilation album, ‘Curriculum Vitae.

Arguably the biggest song of its era, ‘Yahooze’, is a song by Nigerian recording artist Olu Maintain.

It was produced by Puffy Tee and officially released on October 27, 2007, as the lead single from his debut album of the same name.

Although some say it glorified internet fraud, otherwise dubbed Yahoo-Yahoo, it didn’t stop the monstrous impact the song had on the Nigerian music scene.

At some point, the Nigerian Broadcasting Corporation (NBC) banned it from airplay, a decision it later rescinded.

Perhaps the icing on its cake was that ‘Yahooze’ came with its dance step.

Everyone did the Yahooze dance, from the former American Secretary of State, the late Colin Powell, to the Super Eagles U-17, traditional rulers and politicians.

Even the late President Umaru Musa Yaradua was said to have danced the Yahooze dance.

Greenland by celebrity photographer TY Bello is one of the most memorable songs clocking 15 this year.

A song of hope, it sings about abundant potential Nigeria boasts of.

‘“The Lord of the harvest told me so,” she sings in this inspiring song.

As the lyrics suggest, ‘Stylee’ is the true Lagos anthem. This song by DJ Jimmy Jatt rose to become one of the most played songs that year.

The song is more notable because Jimmy Jatt is not a singer.

‘Stylee’ chronicles everyday living in Lagos, from the beautiful to the dangerous.

It talks about the activities of pickpockets, the okada (commercial motorcycles) menace and the whatnots that make Lagos tick.

Ogologomma is a song of prayer by Timaya released in 2007 as part of his album, ‘True Story.

With ‘Ogologomma’, Timaya sings about hope and the need to hang on through dark days.

Timaya inspires his fans as he sings of better days to come. Fifteen years after its release, the song remains relevant in Nigerian music.

‘Jailer’ is another song from fifteen years ago that ruled the airwaves.

One of her numerous songs that speaks to the consciousness of her listeners, ‘Jailer,’ is a song about modern-day slavery, hypocrisy and other related topics.

This song by controversial rapper, Ruggedman made waves, however shortlived, in 2007.

Guided by vocals from 9ice, with whom he later fell out, the song had a good run fifteen years ago.

The song was released in March 2007 as part of his album of the same title.

If you call ‘Ifunanya’ by RnB duo, P-Square the love song of the decade, you may be right.

With a classy video to boot, ‘Ifunanya’ was one of the biggest hit songs of that year.

The song was so good and garnered many remixes from faraway South Africa.

As with ‘Do Me’, the music video for ‘Ifunanya’ was shot and directed in South Africa by their elder brother, Jude Engees Okoye.

The song was composed by 9ice in the year 2007. It was one of the jams in his album, ‘Certificate’, released the same year.