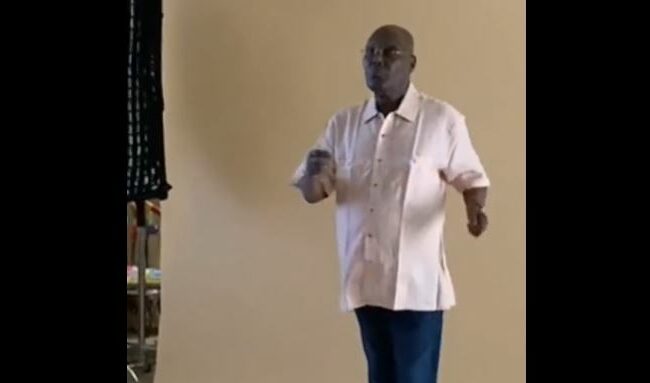 A screen capture from Atiku dancing in solo video

Atiku wore two types of attires in the dancing video. The first was a trouser and a T-shirt while the other was a flowing robe.

The presidential candidate of the opposition Peoples Democratic Party (PDP), Atiku Abubakar, has showed off his “youthfulness” in a short video posted on Twitter by his supporters.

In the 43 seconds video, the 75-year old Adamawa-born politician was seen dancing alone in smart attires, ostensibly to demonstrate that he was still a youth at heart.

The video was shared by one of Atiku’s supporters, Reno Omokri, through @renoomokri. It bore the caption “Breaking: Watch @atiku Dance for Nigeria!”

The same video was shared by a spokesperson of Atiku Abubakar Presidential Campaign Council, Dino Melaye, @_dinomelaye with the title “Atiku is one of us.”

Atiku wore two types of attires in the dancing video. The first was a trouser and a T-shirt while the other was a flowing robe (agbada or babaringa).

@Henridosky replied to Dino Melaye, saying, “Hmmm, Politicians can go to any length just to get votes. The whole unifier don turn dancer.”

@Amyluv90867318 responded to Atiku’s dance by saying, “I don’t blame you; Nigerians are suffering and he is dancing . @atiku shame on you.