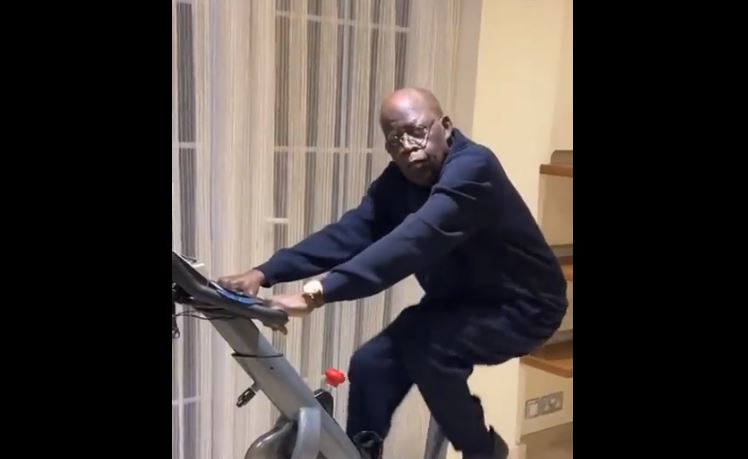 A screen capture from Tinubu's "work out" video

Mr Tinubu left the country for the UK unannounced on 24 September.

The presidential candidate of the All Progressives Congress (APC), Bola Tinubu, has released a video of him working out. He released the video to douse the speculations over his health.

Mr Tinubu, who has been in the United Kindom for about a week, released the video via his verified Twitter handle, with a caption of “I am healthy”.

“Many have said I have died; others claim I have withdrawn from the presidential campaign.

“This is the reality: I am strong, I am healthy and I am READY to serve Nigerians from Day One.

Many have said I have died; others claim I have withdrawn from the presidential campaign.

This is the reality: I am strong, I am healthy and I am READY to serve Nigerians from Day One.#BAT23 pic.twitter.com/qqPkgSDYjs

Mr Tinubu left the country for the UK on 24 September, fuelling speculations on the reasons for the sudden trip.

His campaign team said the APC presidential candidate travelled to the UK to get some rest before the commencement of the campaign. He was also said to have travelled to meet some unnamed groups.

In his absence, Independent National Electoral Commission (INEC) lifted the ban on campaign activities for presidential and National Assembly elections.

Also, other presidential candidates signed the peace accord organised by the National Peace Committee (NPC).

His absence generated the #WhereIsTinubu hashtag on social media, as opponents mocked his unavailability.

It was the fourth time he would miss major events. Two of the events he missed were organised by the Lagos Chamber of Commerce and Industries and the Nigerian Bar Association. He was represented by his running mate, Kashim Shettima.