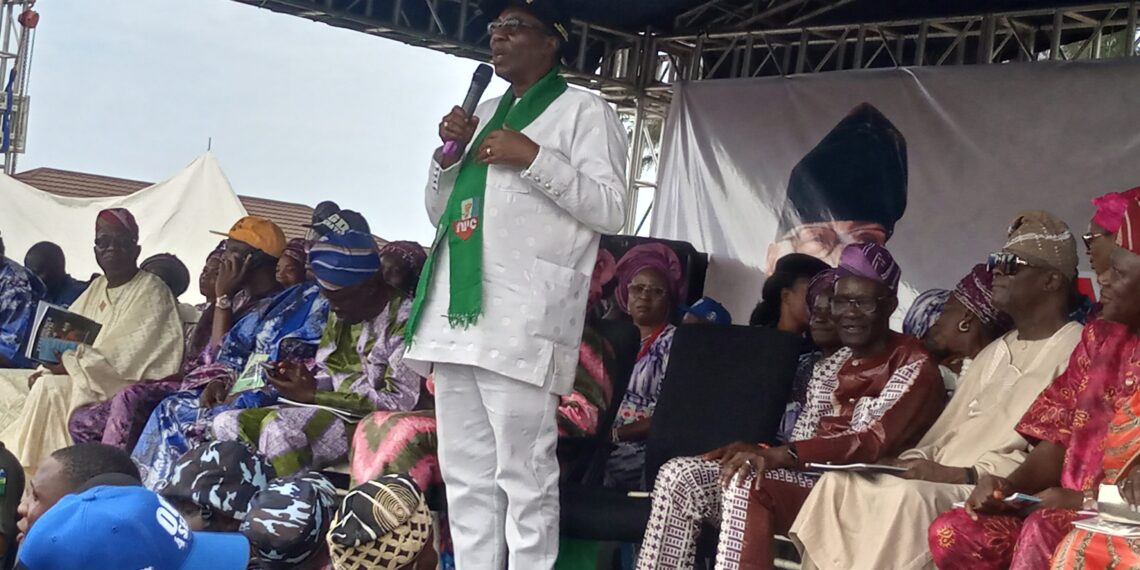 Former Ogun state governor, Gbenga Daniel, addressing the crowed during an empowerment programme on Sunday, in the state.

Former governor of Ogun state, Gbenga Daniel, said he owes the successes recorded during his administration in the state to his cordial relationship with the presidential candidate of the All Progressives Congress (APC), Bola Tinubu.

Now the Ogun East senatorial candidate of the APC, Mr Daniel said the majority of the projects he executed as governor were influenced by Mr Tinubu.

The former governor disclosed this at an empowerment programme held on Sunday in the Sagamu local government area of the state.

Mr Daniel added that many of his projects scattered around the state are still standing the test of time.

“When we came onboard in 2003, we said Ogun State was a land we called a sleeping giant and we said our mission was to wake up that sleeping giant,” he said.

“Let me confess that a lot of those things that I came to implement in Ogun State were because of my relationship with Asiwaju Bola Ahmed Tinubu.

“You know what we did, it is not only in Ogun East that we worked, we worked in Ogun West and you saw them saying so, we worked in Ogun Central, but there are certain things that God enabled us to commence in Ogun State, one of them is the international airport.

“I agree that a lot of people who are now trying to be president are very qualified, but Tinubu is our own.”

Also speaking at the event, a former commissioner for finance in Lagos State, Wale Edun, hailed Mr Daniel and attested to his cordial relationship with Mr Tinubu.

Mr Edun added that presenting Mr Daniel as a senatorial candidate at this time is a round peg in a round hole.

Mr Edun recalled that Mr Tinubu and Mr Daniel’s relationship dated back to 1999.

Mr Edun explained that Mr Daniel donated his Krista Laurel building in Lagos as a campaign office in 1999 while Mr Tinubu was contesting to be the Governor of Lagos State.

“Asiwaju asked me to tell you that if you want better Nigeria, vote him as President and OGD as Ogun East Senator,” he told the gathering.

He also urged the youths to collect their permanent voter cards to carry out their civic responsibility next year.