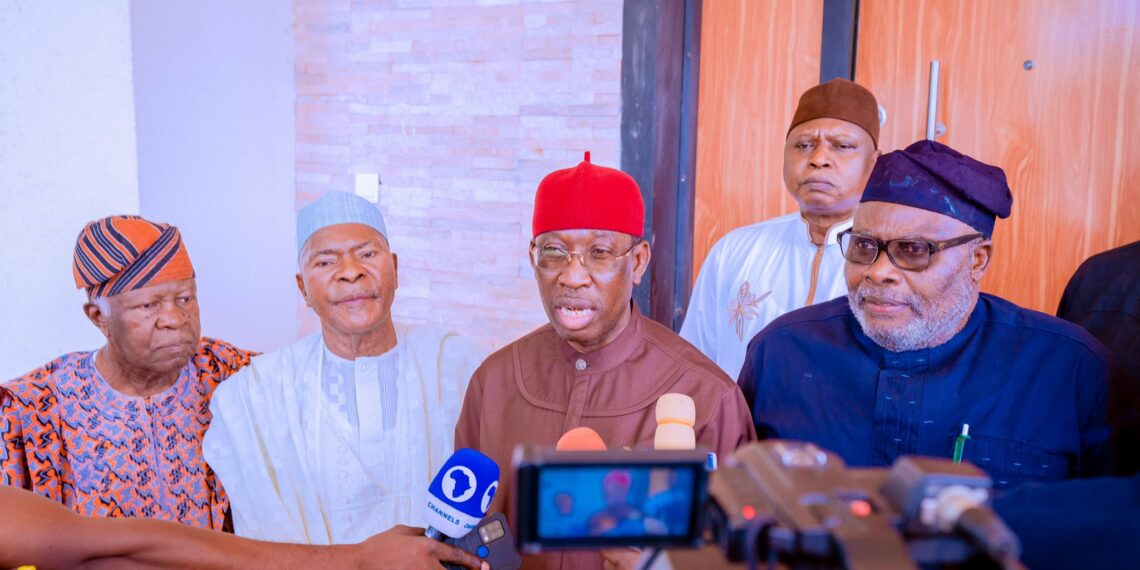 Mr Okowa says no party leader would work against It In the coming general elections.

The vice-presidential candidate of the Peoples Democratic Party (PDP), Governor Ifeanyi Okowa of Delta State, says the crisis within the party would soon be resolved.

Mr Okowa made the declaration in Abuja on Saturday after a meeting with the Acting Chairman of the party’s Board of Trustees (BoT), Adophus Wabara.

He told journalists that all stakeholders would work for PDP’s success at the 2023 general elections and that no party leader would work against the PDP.

“Governors and other members who are aggrieved are members of the party. I believe that my brothers will all work for the party.

“PDP is home and they belong to that home. They are not going to destroy their home.

“We will all work together. I do believe that we will continue to talk with ourselves and resolve the little issues that are left,’’ Mr Okowa said.

He described the meeting as largely fruitful, and said that leaders, including governors, were interacting to resolve differences realising that there are several leaders within the PDP from across the country.

“We understand that there is some level of disagreement, but we will continue to stay in touch with ourselves to resolve the issues,’’ Mr Okowa said.

He recalled that the party’s leaders were in the South-east on Tuesday where Enugu State Governor, Ifeanyi Ugwuanyi, hosted them very well, describing the move as a very positive step forward.

“We had very useful interactions with all our leaders in the South-east and I think that is a great plus for us as a party.

“We were in the South-west where we were very well received by Governor Seyi Makinde of Oyo State and the other party stakeholders. The few issues are still left on the table.

“I am sure we’ll come to discuss them and in the next few days, we are convinced that will be largely reconciled,’’ he stressed.

Mr Okowa advised Nigerians to be guided in making their choices at the 2023 general elections by electing PDP and its presidential candidate, Atiku Abubakar.

He said Atiku has the capacity to address insecurity, the economy, disunity and other challenges facing the country.

He said that Nigeria needed Atiku, a detribalised man with the right experience, humility, calmness to address present challenges and ready to keep Nigeria together.

“I believe that Abubakar is the answer to Nigeria. He has committed himself very clearly in his document to Nigeria: “My Covenant with Nigerians’’.

“Others are still thinking of what they are going to do.

“They have not been able to commit themselves so that we can truly see of a truth if they have a pathway to solving the problems of Nigeria.

“Abubakar is the man that is prepared for the job. He is not going to learn on the job and he is a one man that is acceptable across the six geo-political zones of this nation.

“There is no other person that has the kind of credentials that he has. Abubakar is the right person, Nigerians should think deeply and let us be guided that we need to work collectively to take Nigeria out of the decay that we have found ourselves.

“It Is important that Nigerians work and support the PDP to deliver the Nigeria of our choice as we move into the future,’’ Mr Okowa said.

In his remarks, Mr Wabara, a former senate president, said the BoT special reconciliation committee visited Mr Okowa to discuss on-going crisis in the party and also to proffer solutions to issues at stake.

Mr Wabara, who said that the committee was properly briefed by Mr Okowa, said the committee members would soon meet with Atiku and Governor Nyesom Wike of Rivers State.

“The committee is enlightened now on the issues and we are moving forward.

“In the coming days, we will also meet with the principal, the presidential candidate, former Vice-President Atiku Abubakar and from there we will proceed to meet with Governor Wike.

“We have met with some other governors; we have met Governor Samuel Ortom of Benue, Governor Seyi Makinde of Oyo State, Governor Ahmadu Fintiri of Adamawa, Governor Okezia Ikpeazu of Abia and Governor Ugwuanyi of Enugu State.

“We have what it takes to resolve this, and very soon we will resolve all the issues,’’ he stressed.