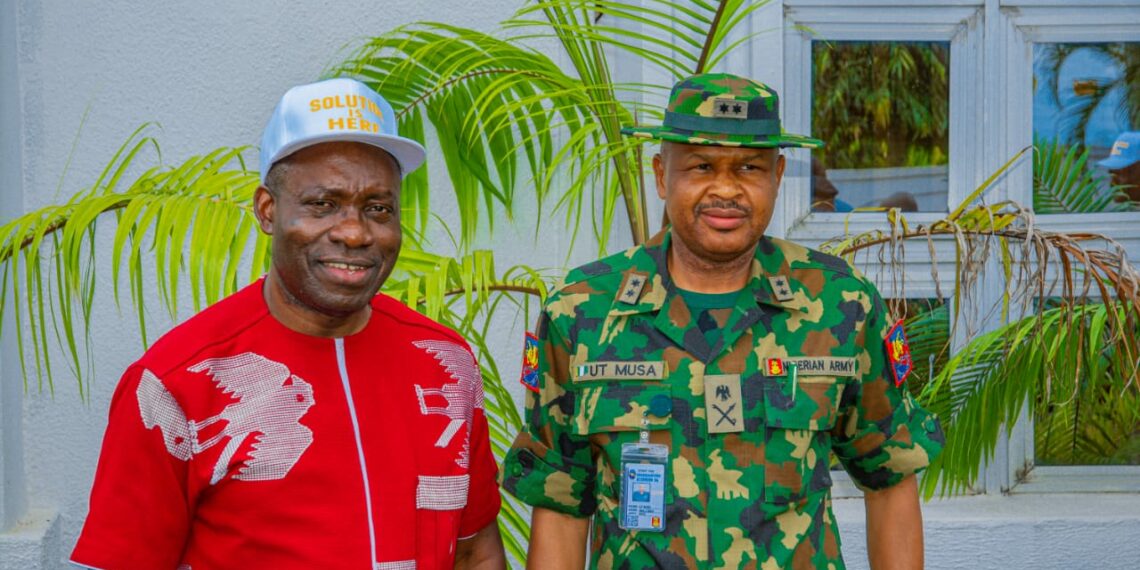 Soludo and the GOC

A military official says the influence of drugs is contributing to the rising crime rate in the country.

The Nigerian army says the gunmen terrorising residents of the South-east hide under the cloak of Biafra agitation to commit crimes in the region.

The new General Officer Commanding (GOC) 82 Division of the Nigerian Army, Enugu, Umar Musa, stated this on Friday when he visited Governor Charles Soludo of Anambra State at the Government House, Awka.

This was contained in a statement by the governor’s spokesperson, Christian Aburime.

The new 82 Division GOC whose division superintends over Mr Soludo’s Anambra, visited to inform the governor of his assumption of duty.

He commended Mr Soludo for his assistance to the security agencies in their battle against gunmen operating in the state.

The GOC said the army was aware of the security situation in the South-east and promised to partner with the governor and other governors in the region to fight the situation.

“We discovered that Anambra and Imo (States) are volatile and that gives us serious concern. The issue of (Biafra) agitation is there, but people capitalise on it to commit crime,” Mr Musa said.

Mr Musa said he has devoted two months of his stay in the division studying the insecurity in the South-east to fashion out ways of tackling it.

“Cases of attacks pose new challenges. I assure you of the total commitment of the Nigerian army,” he added.

The GOC said drug abuse was a major contributor to the incidence of crime in the country.

Mr Soludo, while welcoming the new GOC, expressed happiness over his visit to the state.

He also congratulated him on his new assignment in the region.

The governor told the new GOC to pay special attention to the Anambra-Imo Boundary, pointing out that the gunmen mostly attack from communities where the state shares boundaries with the other South-east states.

“If you cordon off the boundaries between Anambra and Imo in a joint operation, you squeeze and take them (gunmen) out,” Mr Soludo said.

The governor reiterated that those behind the insecurity in the South-east are criminals, insisting that the attackers have no nothing to do with Biafra agitation.

“Anybody in any camp in Anambra State is a criminal. We consider the person as a kidnapper and we treat the person as such. There is no way light and darkness can co-exist. Without law and order, nothing else will work,” he said.

Mr Soludo used the opportunity to commiserate with the new GOC over the killing of soldiers on Wednesday by gunmen in the state and expressed his readiness to partner with the army in tackling insecurity in the state and region.

The Chief of Staff to the governor, Ernest Ezeajughi and Special Adviser to Mr Soludo on security, Ben Chiobi, were among those present at the event.

Like other states in the South-east, security has deteriorated in Anambra State with frequent attacks by armed persons across the state.

The attack on the soldiers occurred less than three weeks after gunmen ambushed a Nigerian senator’s convoy, killing about five persons including two police officers.

The senator’s convoy was attacked in Enugwu-Ukwu, a community in the Njikoka Local Government Area of the state.

A serving lawmaker was also murdered by gunmen in the state.

The attacks, mostly targeted at security officials and government facilities, have been attributed to the outlawed Indigenous People of Biafra which is agitating for a sovereign state for the Igbo-speaking people in the South-east.