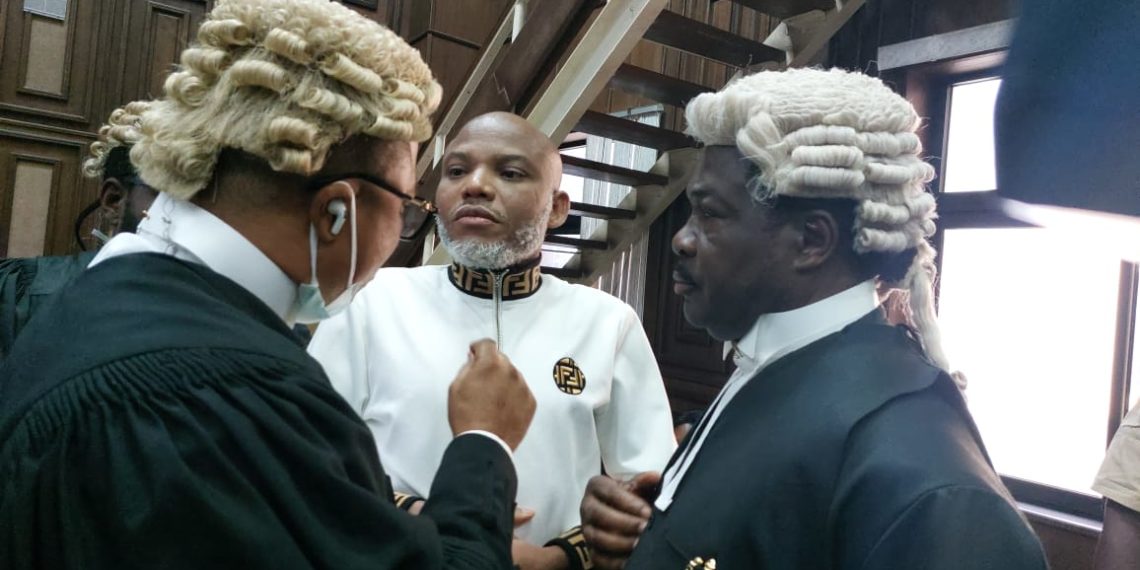 The IPOB leader is asking the court to compel the Nigerian government to pay him N25 billion for the “physical, mental, emotional, psychological, property and other damages”.

A Federal High Court in Umuahia, Abia State, has fixed 4 January for resumption of hearing on the N25 billion fundamental rights suit filed by Nnamdi Kanu.

Mr Kanu, the leader of the outlawed Indigenous People of Biafra (IPOB), is challenging his arrest in Kenya by Nigerian security agents and “expulsion” to Nigeria.

Aloy Ejimakor, Mr Kanu’s special counsel, who filed the suit in March, on behalf of the IPOB leader, disclosed this in a statement, Thursday.

Mr Kanu is being held by Nigeria’s secret police, State Security Services (SSS) in Abuja where he is standing trial for terrorism.

Mr Ejimakor said Mr Kanu approached the federal court after a state high court on 19 January declined jurisdiction on grounds that his alleged rendition, being related to extradition, lies within the “exclusive jurisdiction” of federal court.

“This is what informed my decision to initiate the suit before the federal high court,” the lawyer said.

The IPOB leader is asking the Federal High Court to declare his arrest, detention and prosecution illegal.

He wants the court to compel the Nigerian government to release and “repatriate him to Britain, his country of domicile and citizenship”.

Mr Kanu told the court that his arrest in Kenya and subsequent trial in Nigeria was an infringement of his fundamental rights to personal liberty and fair hearing as guaranteed under the Nigerian Constitution and the African Charter on Human and People’s Rights.

The IPOB leader is asking the court to compel the Nigerian government to pay him N25 billion for the “physical, mental, emotional, psychological, property and other damages”.

He is also asking the court to declare, as unlawful, the military invasion of his home in Abia State in September 2017, and to compel the Nigerian government to tender a public apology to him “for the infringement of his fundamental rights”.

The respondents in the suit include, the Federal Government of Nigeria, the Attorney General of the Federation, the Chief of Army Staff, Brigade Commander,14 Brigade Ohafia, and the Inspector General of Police.

IPOB is leading the agitation for an independent republic, Biafra, which its wants carved out from Nigeria’s South-east and parts of South-south.

The group has been accused of being responsible for the deadly attacks in the two regions.

Mr Kanu was previously arrested and released on bail. He jumped bail in 2017.

He was “intercepted” in Kenya in June, last year, by Nigerian security agents and brought back to Abuja.