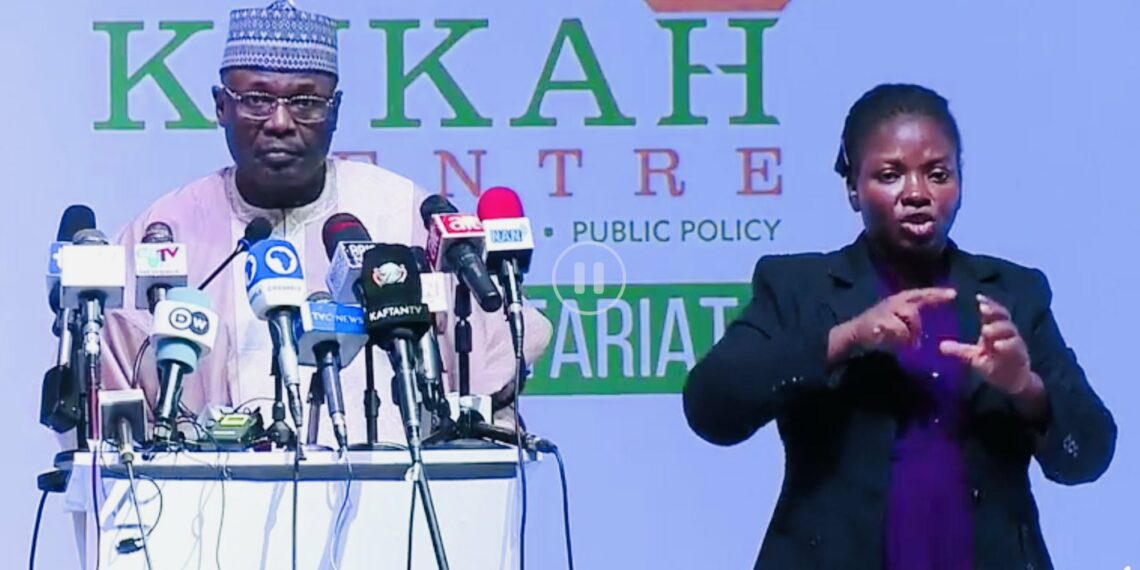 INEC Chairman, Mahmood Yakubu speaking at the signing of the peace accord by the presidential candidates of all the parties in Nigeria ahead of the 2023 general elections.

The Chairman of the Independent National Electoral Commission (INEC), Mahmood Yakubu, has warned state governors against exorbitant charges for posters, billboards and campaign activities in their states.

Mr Yakubu stated that the act of charging exorbitant prices by state governments constitutes a violation of section 95 of the Electoral Act, 2022.

The INEC Chairman spoke at the signing of the peace accord by the presidential candidates of all the parties in Nigeria ahead of the 2023 general elections.

Section 95 (2 and 3) provides that “State apparatus including the media shall not be employed to the advantage or disadvantage of any political party or candidate at any election.

“Media time shall be allocated equally among the political parties or candidates at similar hours of the day.”

It would be recalled that Anambra State Signage and Advertising Agency (ANSAA) had announced that political parties must pay N10 million for erecting billboards and posters for the presidential campaign while senatorial, House of Representatives and state house of assemblies are to pay N7 million, N5 million and N1 million respectively for billboards.

“I will like to draw attention to section 95(2). In the past, so many political parties have complained. The section makes it illegal for the apparatus of the state—meaning the power of incumbency to be used for the advantage or disadvantage of any political party or candidate, including the denial of the use of state facilities, public media houses, charges for outdoor advertising especially signages and billboards. The law also prescribes fines for infractions,” Mr Yakubu said.

Weeks ago, the police disrupted a rally by the supporters of the presidential candidate of the Labour Party, Peter Obi, in Abakiliki, the Ebonyi State capital.

The governor of the state, David Umahi, reacting to the disruption by the police, claimed that the government had asked the organisers of the rally to pay a small token to use the state-owned stadium.

READ ALSO: LG Polls: PDP to contest in only 6 of Jigawa’s 27 LGAs – Chairman

“For record purposes, the relevant government agencies had approved the use of Abakaliki township stadium for a rally by the Labour Party subject to the payment of some specified fees,” he said in a press statement.

The Chairman of the National Peace Committee and former military ruler, Abdulsalam Abubakar, in his opening remarks, warned politicians against toxic campaigns and focus on issues-based discourse.

In a recorded message, former President, Goodluck Jonathan, also warned against hate speech and inciting remarks in the course of the campaigns.

He noted that there are signs of inconsistency in the progress made in the electoral process.

Some of the candidates that attended the signing were the Atiku Abubakar of the Peoples Democratic Party (PDP), Peter Obi of the Labour Party, and Rabiu Kwankwaso of the New Nigeria Peoples Party (NNPP).

Others were Omoyele Sowore of African Action Congress, Hamzat Al-Mustapha of Action Alliance, the only female candidate in the race, Chichi Ojei of Allied People’s Movement (APM) and others.

The candidate of the ruling All Progressives Congress (APC), Bola Tinubu, who is away in London, was represented by his running mate, Kashim Shettima.