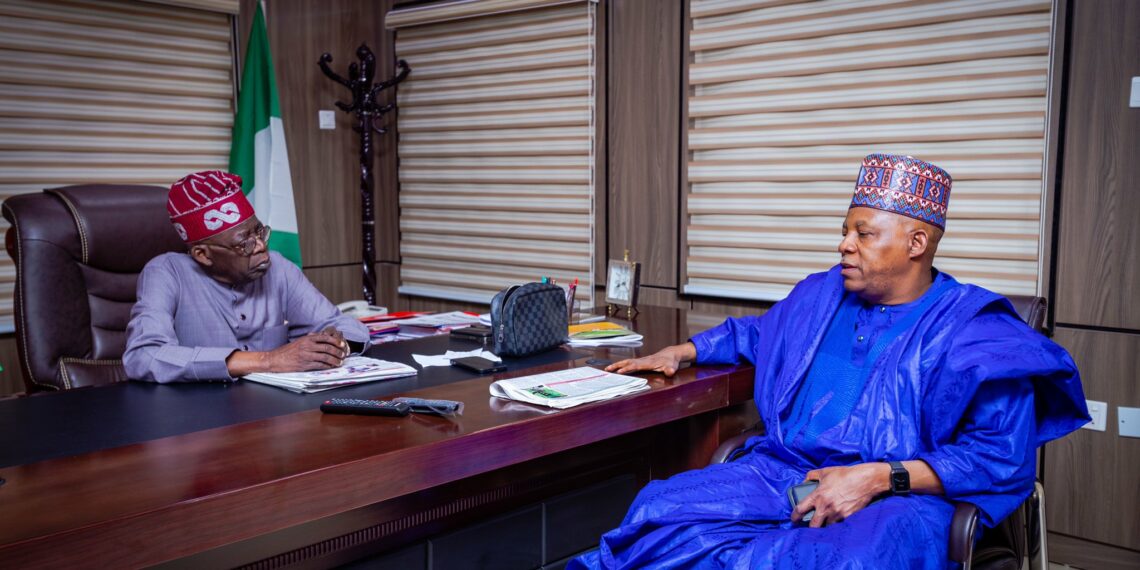 The APC presidential candidate is currently in the UK where he is meeting with some unnamed groups.

The presidential candidate of the All Progressives Congress (APC), Bola Tinubu, will miss the signing of the 2023 election peace pact on Thursday.

Mr Tinubu, who is currently in the United Kingdom, will not be around for the signing of the pact organised by the National Peace Committee (NPC), chaired by a former military Head of State, Abdulsalami Abubakar.

He will be represented by his running mate, Kashim Shettima.

PREMIUM TIMES had reported that the Mr Tinubu left the country on Sunday to meet with some unnamed groups in the UK. There were however speculations that he had gone to seek medical attention.

While away, his campaign council postponed the inauguration of the council indefinitely. The council said it was going to expand the list to accommodate more interests in the party.

This newspaper also reported that the Director General of the PCC, Governor Simon Lalong of Plateau State and the Chairman of APC Governors Forum, Governor Abubakar Bagudu, had resolved to expand the list, to accommodate the interest of the governors.

Campaigns for the presidential and National Assembly elections began on Wednesday in line with INEC’s timetable while the APC presidential candidate was away.

This is not the first time Mr Tinubu will be missing major public appearances with other candidates.

In August, he missed the Nigerian Bar Association Conference in Lagos but was represented by Mr Shettima.

During the conference, Mr Shettima made a controversial statement saying he would personally lead the Nigerian military against criminals while his principal, Mr Tinubu, will oversee the economy.

“I have been in the theatre of conflicts for 18 years, I will lead the troops, my principal is an economy wizard who has transformed Lagos into the third largest economy in Africa. He will concentrate on the economy.

Some persons on social media interpreted the comment as a possible case of an absentee president.

While major candidates like Atiku Abubakar of the Peoples Democratic Party (PDP) and Peter Obi of the Labour Party used the avenue to sell their ideas to the body of lawyers and Nigerians, Mr Tinubu was in the UK having a meeting with Governor Nyesom Wike led group.

Mr Abdulsalam, had last week, after a meeting with the Independent National Electoral Commission (INEC), said the candidates will sign two accords.

According to the former military ruler, the one to be signed on Thursday is to ensure rancour-free and a fair campaign devoid of acrimony while the other one on the accepting the outcome of the result will be signed in January.