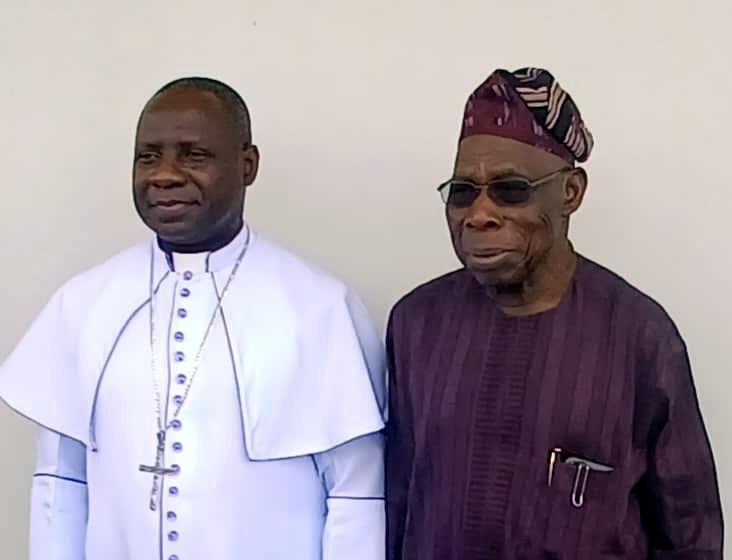 The former president said it is a mistake to say politics is not for the righteous.

Former President Olusegun Obasanjo has urged religious leaders to stand for truth, justice, and equity and push politicians to do the right thing.

Mr Obasanjo gave the advice when the new President of the Christian Association of Nigeria (CAN), Daniel Okoh, paid him a courtesy visit at his residence in Abeokuta.

According to a statement made available on Thursday in Abuja by the Special Assistant on Media to the CAN President, Luminous Jannamike, Mr Obasanjo said Christian and Muslim leaders must work together to watch over the country.

He particularly urged the CAN President to work closely with the Sultan of Sokoto, adding that ”you can both make a turn-around, you can work together.”

“If you stand on the truth, you stand for justice and equity, it is then the politicians will not be able to mess us around.

”I will say it with all sense of responsibility now, if we do not watch it, the politicians will wreck this country and we’ll all regret it, and where can we look for salvation?

“That is where you religious leaders have a significant role to play,” he added.

According to him, it is a mistake to say politics is not for the righteous.

“In the next election, if we do not watch it, it may make or break Nigeria. And I pray that it will make Nigeria,” Mr Obasanjo said.

He further said having both Sultan of Sokoto and the CAN leader on the same page may make politicians to understand and listen.

”If our politicians don’t listen, may be our people will listen,” Mr Obasanjo added.

Mr Okoh had earlier commended the former president for his contributions to Christianity in Nigeria, including the establishment of CAN in 1976 and the Inter Religious Council in 1999.

“In the political sector, you set up the National Political Reform Conference which I am privileged to be a delegate, representing the Christian faith,” he said.

Mr Okoh assured that the Inter Religious Council meeting held in Lagos recently agreed not to leave the political space to politicians alone.

He said the religious leaders would get involved in politics, but not in a partisan way.

The CAN president said that they would continue to give leadership to make sure that the values of religion permeated the political space, help Nigerians to live in peace and work for the unity of the nation.

Mr Okoh was accompanied by CAN Assistant General Secretary, Abiodun Sanyaolu, South West Chairman, Elder Adeaga, and Lagos and Ogun States CAN leaders, among others.