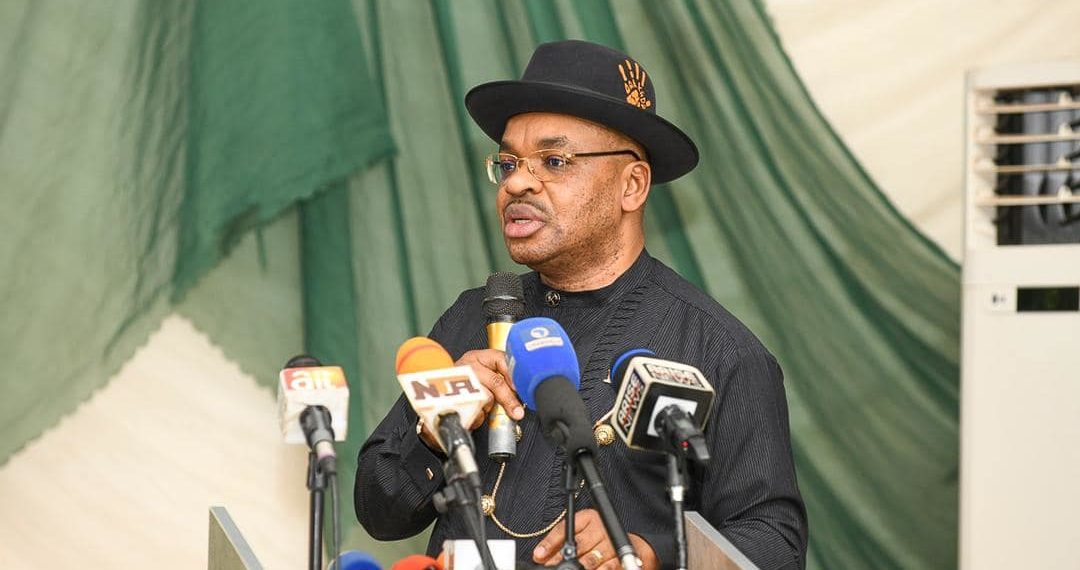 "We are campaigning to win. We must all work. No sitting in Abuja. Everybody will have to go back to carry the message home..."

The Akwa Ibom State Governor, Emmanuel Udom, has warned members of the PDP Presidential Campaign Council (PCC) not to carry out campaigns for the 2023 general elections from Abuja.

Mr Udom, who is the chairman of the Council, gave the warning during his acceptance speech at the PCC’s inauguration on Wednesday.

The inauguration was held to mark the start of campaign activities for the party.

Charging members of the Council, the governor said they have the seriousness that is required to do everything and win the elections.

He said the party also has the unity that is required and that it is the duty of the council to carry to the grassroots, the message on how to rescue and restore the hope of Nigerians.

“We are campaigning to win,” he said. “We must all work. No sitting in Abuja. Everybody will have to go back to carry the message home and make sure you win election for your unit, your ward, your constituency, not by sitting in Abuja. PDP is not an Abuja party.”

On his part, the party’s vice-presidential candidate, Governor Ifeanyi Okowa of Delta State, said the party is ready for campaign and for victory.

He also assured that the PDP will record victory in the South-east – an assurance he got from the warm reception he got in Enugu on Tuesday.

He said he received the same reception in Kano which makes him hopeful that the PDP will win in the North-west as well.

While he urged members of the council to be truthful and diligent in their work as campaigns begin, he assured Nigerians that the PDP will heal the land.

In his speech, the presidential candidate, Atiku Abubakar, said the Muhammadu Buhari-led government has failed at the very essence of what makes a government – security of lives and property of its citizens.

The economy, he said, is in shambles, growth stagnated, the educational system is comatose and the people face massive existential challenges daily.

“But all hope is not lost,” he said. “We have a plan to address these issues and to arrest the drift of our nation. ”

He listed the plans as

– To restore Nigeria’s unity through equity, social justice, mutual collaboration, and consensus among the diverse peoples.

– To build a strong and effective democratic government where the safety and security of the people and their property is the primary and singularly most important responsibility.

– To establish a strong, resilient, inclusive and prosperous economy that generates opportunity, jobs and wealth while lifting the poor out of poverty.

– To encourage the adoption of a true federal system that provides where all the federating units are equal, and has a fair and representative federal government that secures the borders, defends the people and ensures national unity, whilst allowing the federating units to develop and grow in line priorities which they have set on their own.

– To redevelop, invest in, and strengthen the education system in order to provide its recipients with the education and skills needed to compete in the new global order driven by innovation, science, and technology, as well as to live healthy, productive, and meaningful lives.

While he charged members of the council to put in the work, he also urged Nigerians to align with the party for a better result and a better Nigeria.

The PDP is expected to commence campaign rallies across the country after the council’s strategic meeting on Thursday.

PREMIUM TIMES reported how the party plans to commence a campaign rally at Makurdi, the Benue State capital, which is also the home of the party’s embattled national chairman, Iyorchia Ayu.