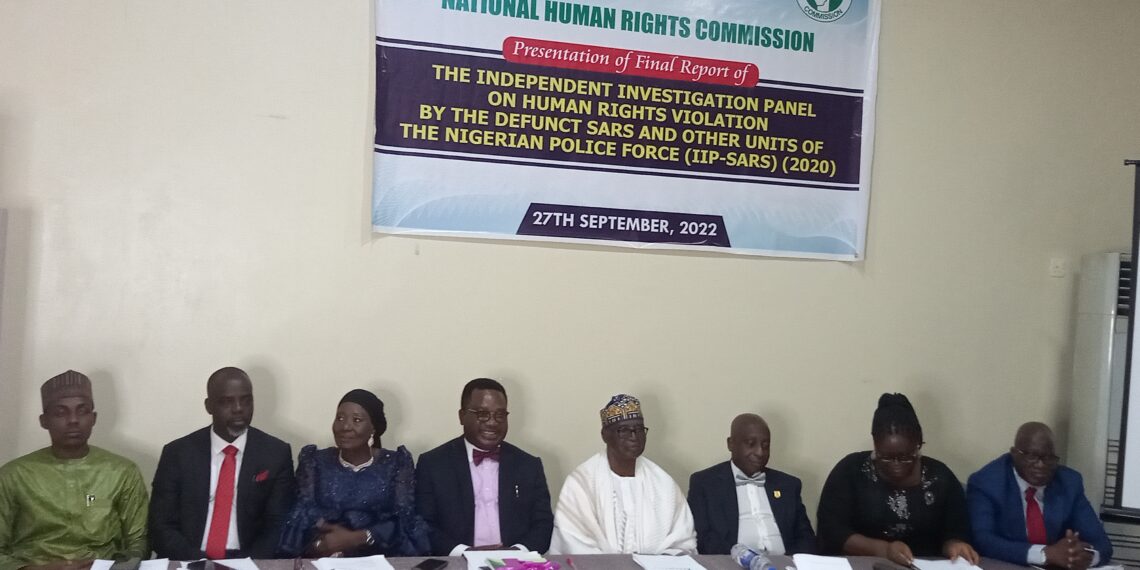 Executive Secretary of the National Human Rights Commission (NHRC), Tony Ojukwu (fourth from left), chairman of the independent investigative panel, Suleiman Galadima (fourth from right) and other members of the panel.

The #EndSARS panel in Abuja recommended the indicted police officers for various degrees of sanctions in different cases of rights violations including extra-judicial killings.

The #EndSARS panel in Abuja has indicted 72 police officers for various acts of human rights violations and recommended them for prosecution and different degrees of sanctions.

According to the report of the panel officially presented in Abuja on Tuesday, 28 of the police officers were recommended for prosecution, 25 for dismissal, 15 for disciplinary actions and four for a reduction in rank.

The secretary to the panel, Hilary Ogbonna, attributed the relatively higher numbers of officers recommended for prosecution and dismissal to the quantum of complaints of extra-judicial killings and enforced disappearance petitions received.

“If 28 people have been indicted for prosecution, this actually means … the huge number of extrajudicial killings and enforced disappearance.

“So it is not by mistake that you are having this high number for both prosecution and dismissal; (it’s) because of the high number of extrajudicial killings and enforced disappearance.”

Of the 295 petitions of police brutality cases received by the panel, 64 were cases of extra-judicial killings and seven of enforced disappearance, both of which come down to a total of 77 persons either killed or forever missing, Mr Ogbonna said.

He charged other institutions of government to play their part in implementing other aspects of the report.

“The time now has come for other institutions of government to do their own work. The panel has done its work. And we have to move on to the next stage,” he said.

The names of the indicted police officers are contained in the panel’s report which has yet to be released to the public.

Earlier at the event on Tuesday, the Executive Secretary of the NHRC, Tony Ojukwu, formally received the investigative panel’s report from its chairman, Suleiman Galadima, who is a retired Justice of the Supreme Court.

Known officially as the Independent Investigative Panel (IPP) on Human Rights Violations Against SARS and Other Units of the Police, the panel was set up on 21 October 2020 in the aftermath of the #EndSARS protests.

Nigerian youths trooped out in different parts of the country in October 2020 to protest against incessant cases of police brutality. 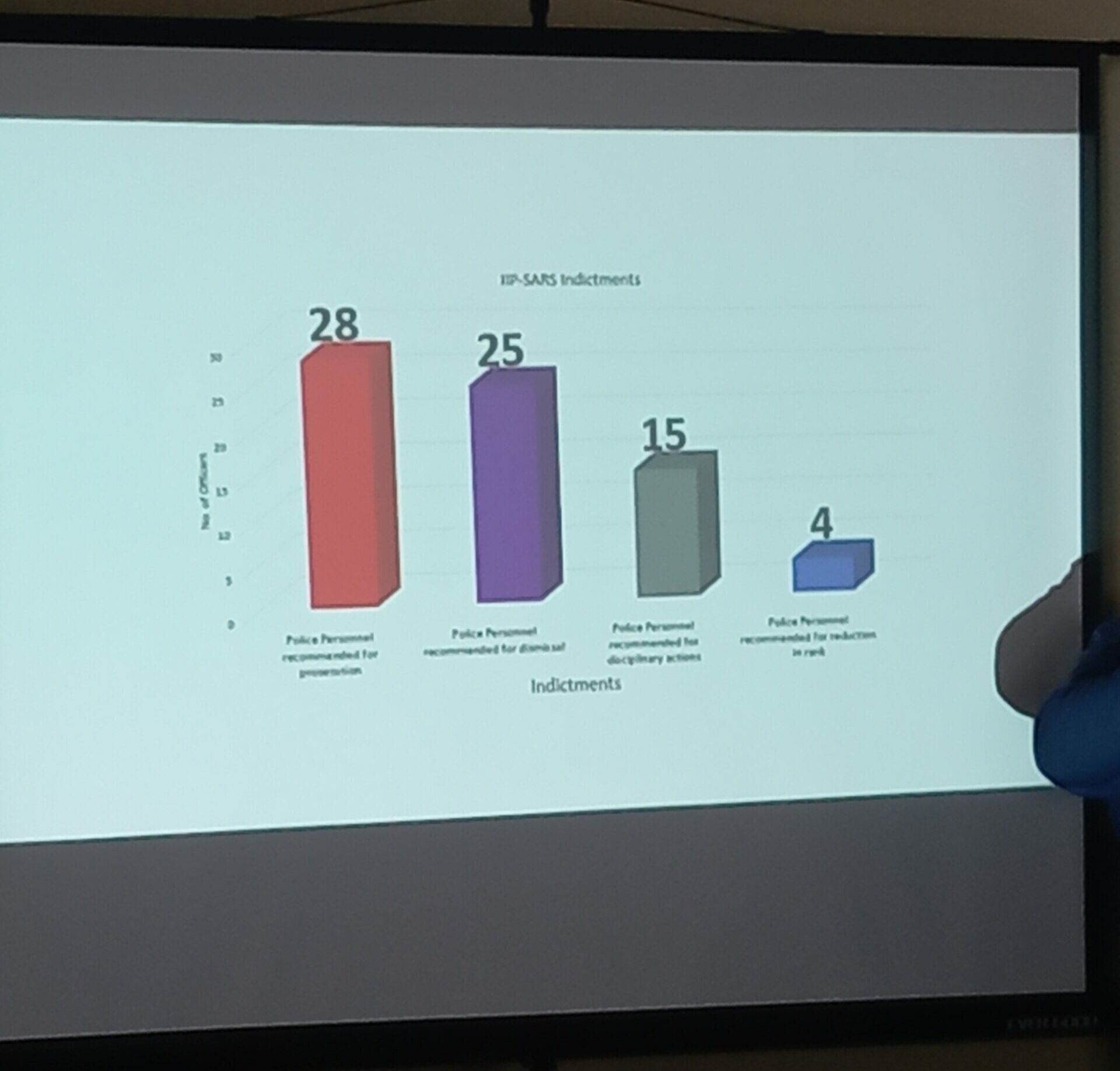 The protesters called for the proscription of the Special Anti-Robbery Squad (SARS), a tactical police unit most notorious for the inhuman conduct of its officers.

The government had, in response to a demand of the protesters, disbanded SARS and set up the panels of inquiry popularly referred to as #EndSARS panels to recommend compensations for victims of police brutality and recommend sanctions for erring officers.

Alongside the NHRC, 29 of the 36 states of the federation also set up similar panels to investigate complaints of police brutality.

#EndSARS protesters’ efforts will not go in vain

Speaking after receiving the report of the panel, the Executive Secretary of the NHRC, Mr Ojukwu, said “payment of compensation is just one step on the road to justice.”

“There is still the need to hold indicted officers of the Nigerian Police accountable for these violations,” Mr Ojukwu.

The government institutions are expected to play different roles in the implantation of the report, according to Mr Ojukwu, including the Office of the Attorney General and Minister for Justice, the Police Service Commission and the Nigeria Police Force.

He applauded “the decisions and indictments” by the panel and assured Nigerians, the victims and their families “that the National Human Rights Commission will do everything possible to ensure that the decisions are implemented”.

He also hailed the panel’s recommendations for police reform “to ensure effective and human right-centred policing”.

He added that the commission would work with “the Nigerian Police, the relevant committees in the National Assembly, civil society and development partners to implement these reforms.”

He thanked the panel, whose work, he said, ensured that victims of human rights violations got justice “and that the efforts of Nigerian youths exemplified at the END SARS protests were not in vain.”

The chairman of the panel, Mr Galadima, called on the federal government to urgently look into the report and its recommendations “with a view to implementing it.”

He also called for the establishment of “a Victim Compensation Fund be set aside to settle the awards of compensations.”

He urged the National Economic Council headed by Vice-President Yemi Osinbajo which directed the establishments of the #EndSARS panels across states to also direct the NHRC “to harmonise these various reports of all the Panel an urgently submit same to the Federal Government for quick action.”

Presenting the factsheet of the panel, Mr Ogbonna said petitioners submitted a total of 295 petitions with diverse subject matters.

The cases include inhuman treatment and degrading treatment (71), violations of the right to life (64), enforced disappearance (13), non-payment of judgement sums (55), and unlawful arrest and detention (38).

The panel received the petitions from 29 states and Abuja, the Federal Capital Territory (FCT).

On the outcomes of the petitions, Mr Ogbonna said the panel heard in full and decided on 95 petitions.

He said 54 of the petitioners were struck out for various reasons including lack of diligent prosecution by those who abandoned their cases.

He also said 57 of the petitions were referred to the NHRC for further investigations.

There were also 56 petitions which were about enforcement of monetary court judgements given against the police between 10 to 15 years ago. 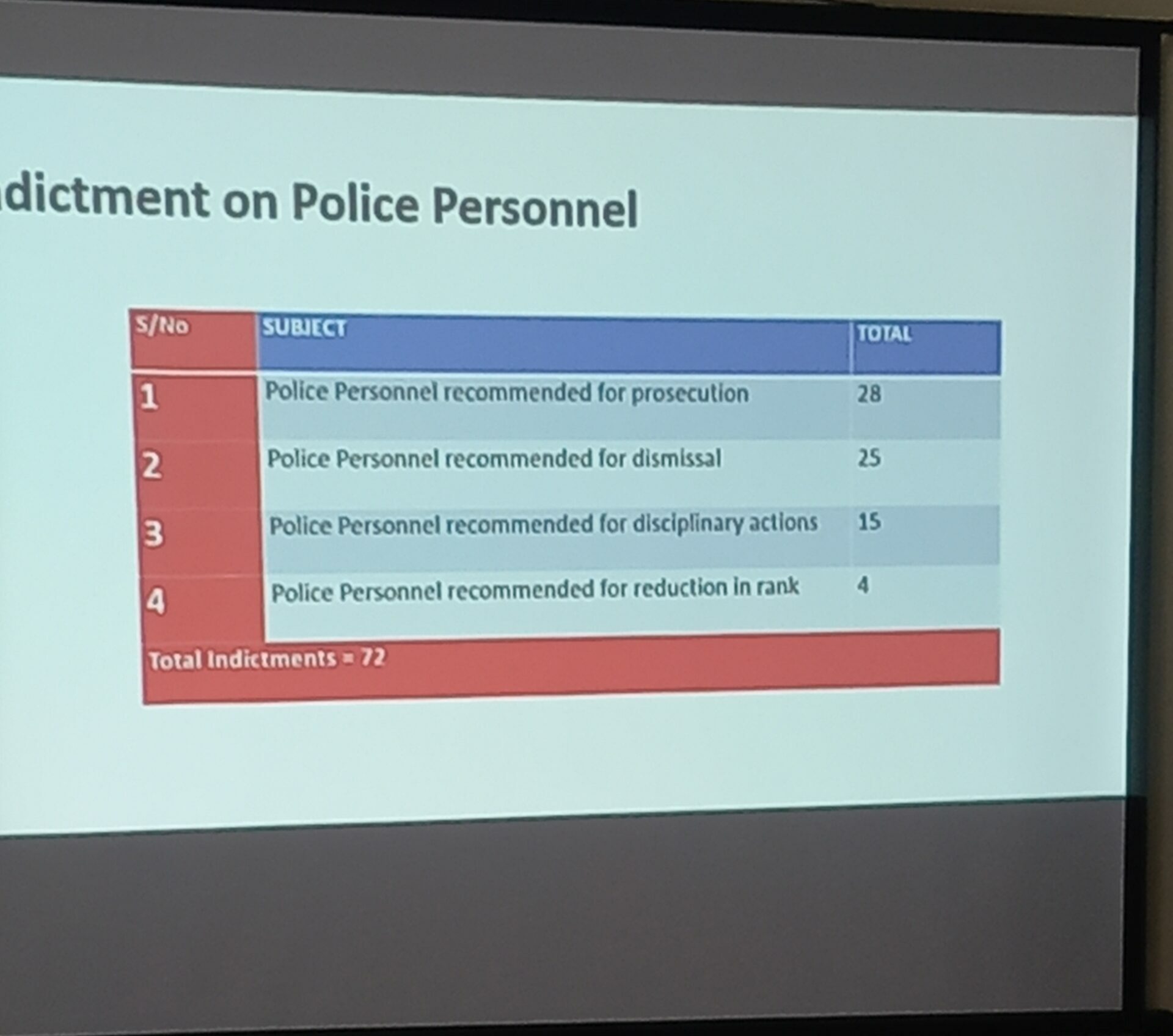 He said the panel verified the court judgements, except “about four” of them, at the various courts across 24 states.

But he said the NHRC could not pay the beneficiaries.

“We cannot pay them. One, because they are not our judgements. Two, the sums of judgements are incredibly high. We are talking about N870 million.

“It is their right to receive it, but hopefully, in future, that arrangement will be worked out by the commission which will implement this report,” he said.

Another category of outcome was the withdrawal of 54 of the petitions.

These, according to him, were those the petitioners decided to refile at the panels in their states.

There were those, according to Mr Ogbonna, who withdrew because they were allegedly intimidated by the police and those who decided to “leave it to God”.

The extra-judicial killing category has the highest number of petitioners and monetary awards among the seven classes of complaints for which the panel recommended compensation.

This is followed by cases of torture, cruel, inhuman and degrading treatment with N82,474,093.7 awarded to 30 petitioners.

The next highest award of N52,550,000 was paid to seven petitioners with cases of enforced disappearance.

The breakdown also shows that a total of N27.5 million was paid to six petitioners with cases of unlawful confiscation or seizure of property.

The sum of N27 million was awarded to nine petitioners who complained about unlawful arrest and detention, and N22.5 million to six victims of threat to life.

The rest are three petitioners who complained about abuse of office and got N7 million compensation.