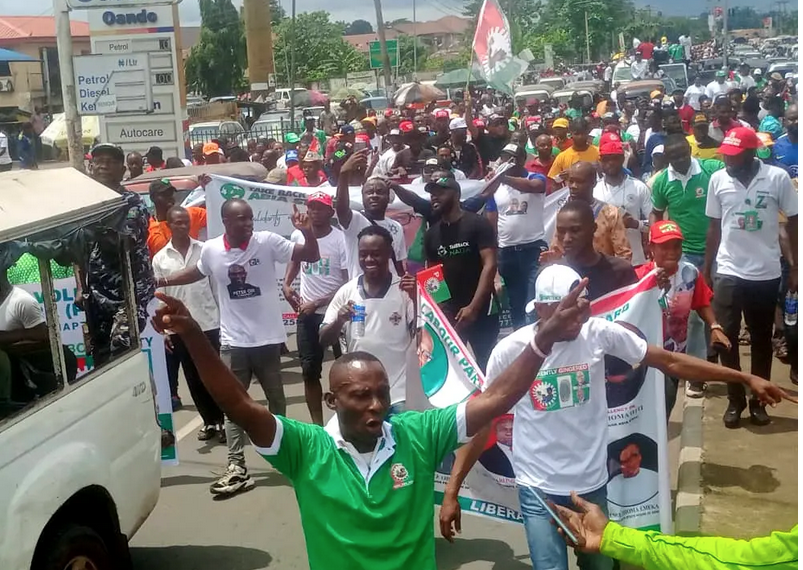 The meeting of the Labour Party members were disrupted in Enugu State over the weekend.

The  apex Igbo socio-cultural organisation, Ohanaeze Ndigbo, has condemned the alleged disruption of a meeting of members of Labour Party (LP) in Enugu State.

The meeting of the LP members was said to have been disrupted by some hoodlums on Saturday in Nomeh Unateze, a community in Nkanu East Local Government Area of the state.

Ohanaeze, in a statement by its spokesperson, Chiedozie Ogbonnia, on Monday, described the alleged attack as “irresponsible, unwarranted and shameful embarrassment to the Igbo.”

“It is inconceivable that at a time eminent persons and groups from all over the world are embracing the Labour Party as the quintessence of equity, justice, hope, economic emancipation, social risorgimento and inter-ethnic unity in Nigeria, some disgruntled scoundrels are busy disrupting their meetings at the grassroots in the South-east,” the group said.

It said the incident sends “wrong signal” about the values of the Igbo and charged various community leaders and security agencies in Igboland to be alive to their responsibilities of securing the region to prevent reoccurrence of the attack in the area.

“The Ohanaeze Ndigbo led by Ambassador Professor George Obiozor reiterates that political parties of all persuasions are free to market their manifestoes and canvass for votes in all the country; but nothing in the wildest imagination should compel the so-called unknown gunmen or the vile partisans masquerading as political leaders to employ the use of thugs to disrupt or attack political meetings in Igbo land,” Ohanaeze stated.

The group warned those who have made themselves “willing tools to antagonise the Igbo spirit” to desist from the act to avoid dire “consequences.”

It said those who support opposition political parties and their candidates must never allow such “narrow interest” to push them into jeopardising the general interest of Igbos.

Members of the LP have become targets of gunmen attacks lately in the South-east.

The latest attack comes about three weeks after some LP members were attacked in separate locations in the state by gunmen who disrupted their meetings, injured members and vandalised a vehicle.

There are suspicions among LP members that the attacks might have been sponsored by some other political parties in the South-east said to be ‘disturbed’ by the growing popularity of LP in the region.

READ ALSO: Ohanaeze demands the release of Kanu, others from detention

Since the emergence of Peter Obi as the LP presidential candidate, many Nigerians, mainly from the South-east, appear to have embraced the former governor’s candidacy.

Mr Obi hails from Anambra State, South-east Nigeria, where he served as a state governor between 2006 and 2014.

Ohanaeze Ndigbo, which repeatedly called for Nigerian President of South-east extraction in 2023, was disappointed that the two dominant political parties in Nigeria, PDP and APC, picked their presidential candidates outside the region.

Although the apex Igbo socio-cultural organisation has not openly endorsed Mr Obi, they have consistently maintained the call for Igbo presidency in 2023.