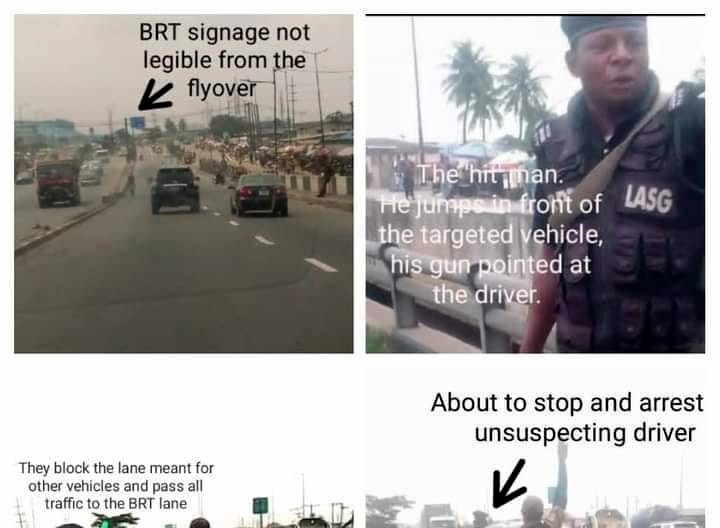 Last Friday, the Federal High Court in Lagos ruled that LASTMA lacks the power to impose fines on drivers who allegedly committed a traffic offence and tow their vehicles.

A Lagos road user has narrated his experience in the hands of the government’s BRT Taskforce, which enforces the state’s traffic law.

In a post widely shared on social media, the driver said he was stopped along Ikorodu Road by the gun-brandishing taskforce officers, for allegedly committing a traffic offence, and his vehicle towed to the LAMATA office in Ketu.

He said he was promptly issued a paper to Oshodi mobile court where the magistrate fined him N50,000.

Last Friday, the Federal High Court in Lagos ruled that LASTMA lacks the power to impose fines on drivers who allegedly committed a traffic offence and tow their vehicles.

Read his story below:

Just a few weeks ago Nigerians viewed a viral video of an OAP working with a major tv station caught in the snare of a BRT taskforce in Lagos in which he made frustrated outbursts of ‘I will tell the governor’ repeatedly.

Trust Nigerians, we had a grand time analysing and chastising the hapless OAP. He later paid the fine and apologized to Nigerians on air.

What we did not seek to ask was what were the circumstances that led to his apprehension by this BRT task force.

Well, on a certain Wednesday a few weeks later, at around 11.00 a.m., I fell victim to this same BRT task force entrapment tactic at Mile 12/Owode in Ikorodu.

And as I found out during and after my ordeal, a large number of unsuspecting citizens are also victims. Practically all victims are people who were strangers to Ikorodu and were only passing through. Even yesterday, an elderly acquaintance narrated his shocking experience at that same spot. He had to part with N40,000 to the task force officials.

Unfortunately, for some reason, we all choose to bear our crosses silently and move on. Which is why I have chosen to publicise my sordid ordeal at the hands of this dubious task force.

I had an appointment that for 12 noon that Wednesday at Imota, on the outskirts of Ikorodu, inwards Ogun State.

Now, Ikorodu is a place I had not been to in over 3 years.

I set out at about 10.30 a.m. from Alausa. No traffic. I should reach Imota within a few minutes to 12 noon according to Google maps.

All was going smooth until I descended the 2-lane Mile 12 flyover inbound Ikorodu which links to a 2-lane road with the outer (left) lane designated as a BRT lane.

From the top of the flyover, I saw that the only lane reserved for non-BRT traffic was impeded by some policemen and other officials (about 7 in total) who surrounded a vehicle.

This forced oncoming traffic to cut briefly onto the BRT lane so as to bypass the impediment. I followed the flowing traffic and did same (see attached pictures for clearer understanding).

Just as I was bypassing the impediment (one has to slow down there as the policemen spilled onto the lane), an armed mobile policeman jumped in front of my vehicle with a gun aimed at me, causing me to stop dead on that lane to avoid hitting him.

I thought it might be a check point and wondered why it was set up at that spot and blocking traffic on both lanes. But then, this is Nigeria. I stopped as ordered and the menacing looking policeman waved his gun to indicate that I should come down. I indicated with my hand that I couldn’t park there and he should let me clear off the road and park in front of the already parked vehicle. He reluctantly agreed and after I had cleared, I came down.

The gun brandishing mobile policeman asked me if I knew why he stopped me. I responded in the negative (I honestly had no clue). Then he said I was driving on a BRT lane. No way, I said. I drove along with other traffic unto that lane to bypass the obstruction caused by them on the lane we were hitherto on.

He proceeds to show me a picture of my car on the BRT lane as evidence. To say I was stupefied puts it mildly.

Then they moved in on me, about 5 of them, including other gun-brandishing policemen. I observed that the car I parked in front of had left. And it was my car they were now surrounding and blocking the non-BRT lane with.

Anyway, I didn’t play ball (if you know what I mean) and ended up being slammed in court by the now very hostile, abusive, and very threatening and abusive gun-brandishing policemen who towed my vehicle to LAMATA office at Ketu, where I was promptly issued a paper to Oshodi mobile court.

I guess my recording the attached visuals did not rub them the right way.

It was while in the court premises at Oshodi later that day that I discovered that all the BRT infractions on that day (7 or 😎 were from the same spot, all apprehended and card impounded within the last 24 hours, under very similar circumstances. All strangers to Ikorodu.

While my co-accused and myself were discussing the matter and trying to decide whether to plead not guilty in unison, we were advised by some ‘helpful’ bystanders that if we want your vehicles back quickly we had better plead guilty and pay our fines. And that if anyone chose to plead not guilty such person should be ready for several adjournments which would deny them use of their impounded vehicle until the case is finally over. And if eventually still found guilty after the process the fine could be even worse and one might be forced to go through other processes before you getting their vehicle back. 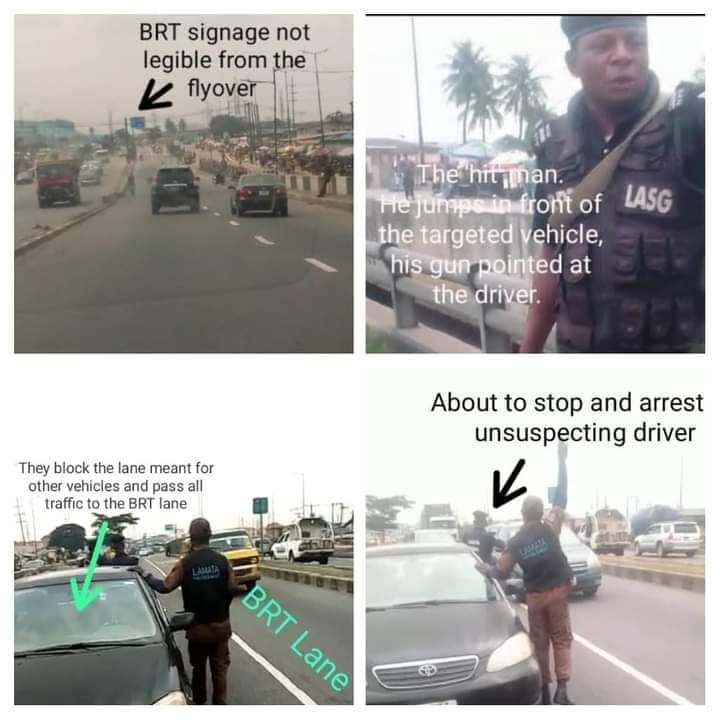 During the course of the trial, we were all charged with passing the BRT lane (count 1) and causing obstruction (count 2). In my case I was also charged with towing my vehicle.

Luckily, we were allowed to speak before the magistrate gave his judgement and fined us. A few explained that they aren’t familiar with that route as they were only passing through and didn’t see the sign (the sign is not visible from the bridge), and once you descend from the bridge you are liable to enter the BRT lane immediately if you are a stranger to that route.

Others like me only followed the traffic in front of them. Luckily, the magistrate allowed me to tender the video I recorded as evidence (we had been told by the ‘helpful bystanders’ that phone videos were not admissible) and listened to my explanation that the thing was entrapment. He asked several questions about the video which I answered (he apparently hadn’t any understanding of the setup of that location hitherto my video). He pondered for about 5 minutes the video evidence which indicated with other evidence (all the BRT infractions were from that same spot and all with similar stories) that something was not quite right.

Magistrate eventually fined us all N20,000 for the first charge (instead of the statutory N70,000), and N30,000 for the second charge as a deterrent since we were all ‘first offenders,’ and warned us to be conscious of road signs and the environment when driving. For my third charge he discharged and struck it out since the police counter video revealed that my car key was with them, but they chose to tow my vehicle for whatever reason.

The next morning I went to the LAMATA Ketu office to pay the fine and pick up my car so I could proceed to Imota.

When I got to LAMATA office around 10.00 a.m., I observed they had already brought in 5 fresh victims from the same spot that morning.