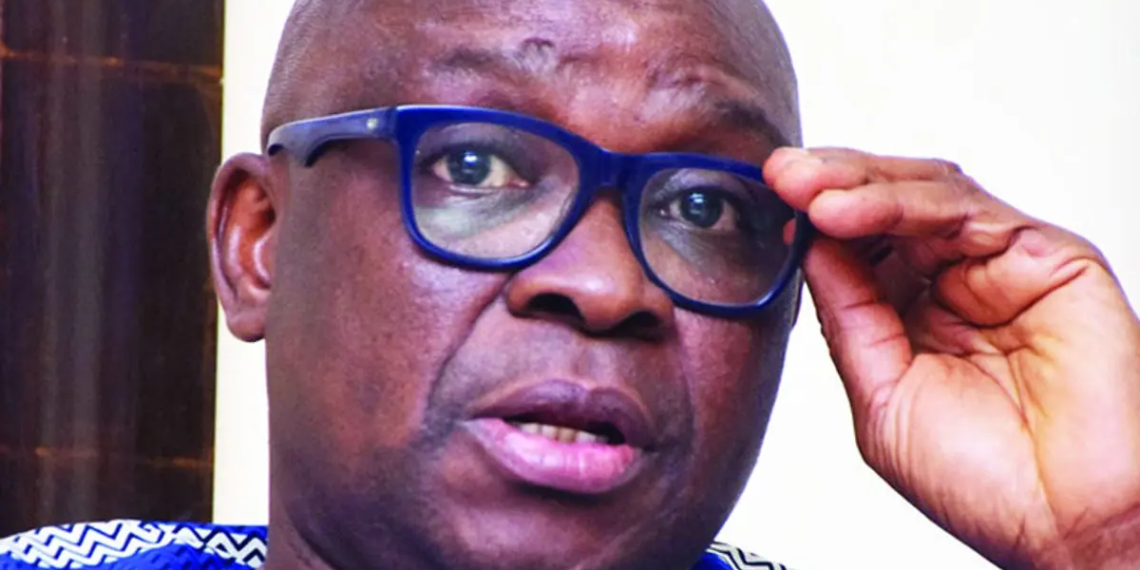 Mr Fayose said he would never join the APC

The former Ekiti State governor, Ayo Fayose, has said despite his misgivings about the current state of affairs within the Peoples Democratic Party, he will not defect to the All Progressives Congress.

Mr Fayose also restated his support for the Governor of Rivers State, Nyesom Wike, in his contention with the presidential candidate of the PDP, Atiku Abubakar.

The former governor was addressing key members of the party in Ado Ekiti on Monday.

The leadership of the PDP had been making efforts to ensure the support of the Rivers State Governor for the presidential candidate of the party.

Mr Wike has been indifferent to the party’s activities since he lost the presidential ticket to Mr Atiku and was also not considered for the Vice Presidential slot.

The governors of Lagos and Ekiti states, Babajide Sanwo-olu and Kayode Fayemi had, in the company of Mr Fayose, travelled to Rivers State apparently to woo the governor to the APC.

Although rumours had it that Mr Wike was considering dumping the PDP ahead of the 2023 presidential election, the governor came out to deny it.

However, Mr Fayose said on Monday that despite his support for the Rivers State Governor, he will work for Mr Atiku in the coming election.

“A lot has been said, but like I have said many times, let me state it here expressly again that I will never join APC for whatever reason,” he said.

“Also, we have Senatorial, House of Representatives and House of Assembly candidates here. Among them is my biological son, Joju, and others who are my political sons and daughters. My interest is that all these candidates should win elections.

“Therefore, I am appealing to those who are angry to stop being angry. Those who are fighting should stop fighting. Let us face the 2023 elections together and win first. After that, we can resume the fight.”

The PDP candidate in the last Ekiti governorship election, Bisi Kolawole, used the meeting to thank party members for supporting him during the election.

“Even though we lost, I am still grateful to the party for the opportunity and I wish to urge all the party stakeholders to close ranks so that together, we will rise again,” he said.

The State Acting Chairman, Lanre Omolase, who spoke on behalf of the State Working Committee members, affirmed their belief in Mr Fayose’s leadership, saying that those plotting against him should sheath their swords in the interest of the party candidates who are standing for elections next year.

Also at the meeting were 10 out of the 16 local government party chairmen and over 150 ward chairmen among other party members.