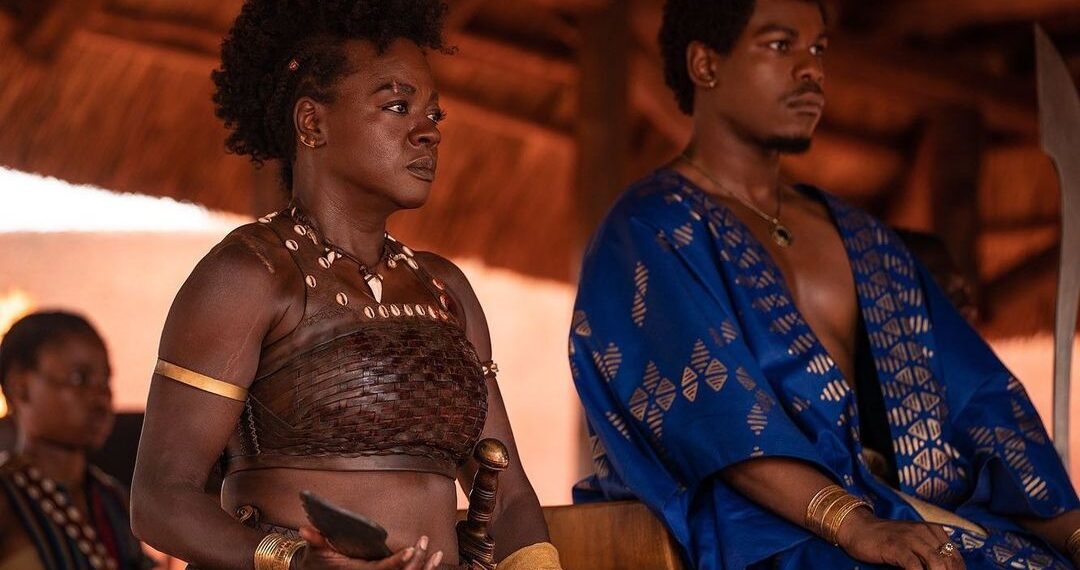 Viola Davis and John Boyega in The Woman King

‘The Woman King’ is one rare opportunity that sheds light on the collaboration of Africans in one of perhaps the darkest tragedies of humanity; the slave trade.

The devastating effects of the slave trade in Africa can still be felt today.

It is evident in some of the existing slavery sites in today’s West Africa, from Nigeria to The Gambia, Senegal and the Republic of Benin.

The Badagry slave museum in Nigeria, to this day, still houses the relics of that era.

‘The Woman King’ may just be another documentation of the slave era and the bravery of African female soldiers.

‘The Woman King’ is set in the West African kingdom of Dahomey, now known as the Republic of Benin, during the 1820s.

It tells the story of the Agojie, an all-female group of warriors who protect the kingdom. They are fierce, vowed to a life of celibacy, and no man is allowed into their training ground.

The opening sets the tone for what’s to come when the Agojie liberates prisoners from the Oyo army.

In that era, the ninth ruler of Dahomey, the new King Ghezo, tries to see things from a different perspective.

His kingdom has a tributary pact with the mighty Oyo Empire. Included in the contract is the use of the Ouidah Port as a slave route.

As the king puts it, “the slave trade is the reason we prosper, but at what price?”

The kingdom is torn between paying the tribute, which comes with a heavy trade tax, or not paying, which is a declaration of war.

To raise an army strong enough to dare the Oyo army, the leader of the Agojie, General Nanisca, is tasked with training a new generation of warriors to fight against an enemy.

Nawi, a 19 years old girl, refuses to bow to culture by being a child bride. So her father gives her off to the Agojie. She is taken to the palace of women, where no men are allowed.

Her presence in the army changes the course of events in the war that is to come.

Not many historical movies look into the pre and colonial era exploits of the black race in a positive light.

Films like ‘Roots’, ‘Amistad’, ‘The Birth of a Nation and, more recently, ‘The Underground Railroad’ all tell of that dark era with an undertone of a conquest of the black race.

‘The Woman King’ mirrors this notion. The movie is one rare opportunity that sheds light on the collaboration of Africans in one of perhaps the darkest tragedies of humanity: the slave trade.

King Ghezo sought to end slavery and replace it with the palm oil trade. He was told explicitly by members of his court, “no one fears a ruler of peasants.”

It also cleverly highlights the existing civilisation at the time. The fact that the Europeans, the Portuguese and other slave dealers met well laid out cities and the current system of governance and, of course, an almost impregnable army on arrival at the African shores is rarely discussed.

As King Ghezo tells the Portuguese who came to do business, “I wish for my people to prosper as those of your land do… We are under no illusion that you see us as a commodity.”

Another plus for the movie is the use of the authentic Nigerian, or rather, African accent.

The choice of Viola Davis as General Nanisca might make the viewer almost tempted to believe that she is of African descent. It is not surprising, though, as she has earned veteran status in Hollywood.

Other cast members like Thuso Mbedu (South Africa) and Sheila Atim (Uganda) provided a balance that seems lacking in movies of that nature.

However, for the Nigerian audience, John Boyega and Jimmy Odukoya were the icing on the cake.

While Boyega plays the king, Odukoya plays Oba, the leader of the Oyo army.

Both roles were pivotal to the film’s direction, and their delivery sold its different themes.

An example would be the intense exchange both characters had at the marketplace over loyalty to the Oyo empire.

The movie also subtly touches on sub-themes like the existing patriarchy-fueled child marriage.

In ‘The Woman King’, Nawi is that heady child who has no respect for established authority until she realises that General Nanisca is her mother, who gave her up for adoption many years back.

‘The Woman King’ is based on the Dahomey Amazons, an all-female military regiment of the Kingdom of Dahomey.

They existed from the 1600s until 1904 and were from the Fon ethnic group.

Dahomey in West Africa was one of the thriving kingdoms of the 17th century.

The Kingdom of Dahomey was a significant regional power with an organised domestic economy built on conquest and slave labour.

In the 19th century, the kingdom ended its tributary status to the Oyo Empire.

It became independent in 1960 after over half a century of French rule.

During her training, she pulls a prank showing that gunpowder doesn’t need a gun to ignite. It only requires a spark.

As the other tribes gather around the Plateau surrounding Dahomey, that revelation leads the Agojie to take the fight to them, ending the hold of the Oyo Empire over Dahomey.