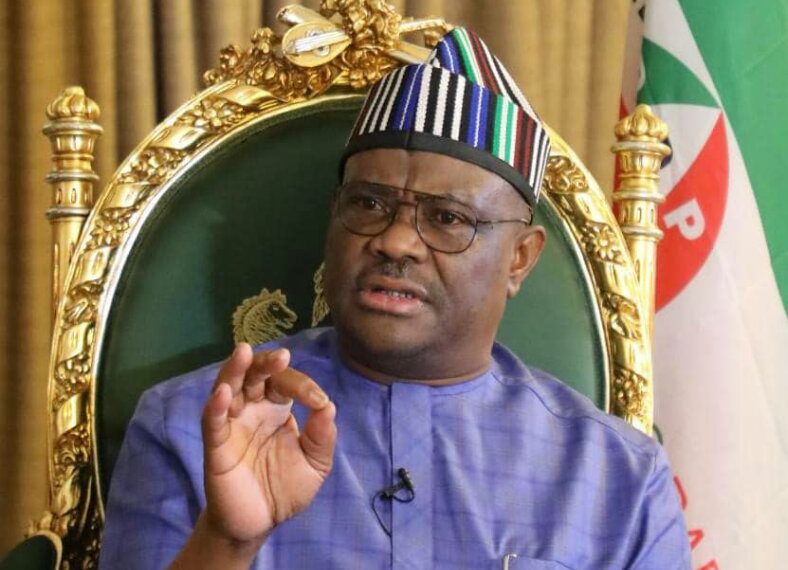 Wike keeps mute over his inclusion in Atiku’s campaign

The Rivers governor and others are demanding the resignation of the PDP National Chairman, Iyorchia Ayu.

Unlike his Akwa Ibom State counterpart, Udom Emmanuel, who has accepted his appointment into the Peoples Democratic Party (PDP) campaign committee, Governor Nyesom Wike of Rivers State has been silent over his inclusion in the committee.

Mr Wike’s media aide, Kelvin Ebiri, when contacted, did not respond to requests for comment on the matter.

The PDP on Thursday named Governor of Sokoto State, Aminu Tambuwal as the director general of its 2023 presidential campaign committee, while Mr Emmanuel was appointed chairman.

The party also named Governor Wike as a member of the campaign committee.

According to a document released by the party, Oyo State Governor, Seyi Makinde, an ally of Mr Wike, was named the vice chairman (South) of the committee.

The appointment came amidst a crisis that is rocking the PDP, with some members, led by Governor Wike, calling for the resignation of the party National Chairman, Iyorchia Ayu.

It is not clear if Messrs Wike and Makinde would accept their appointment into the council.

The committee’s director general, Mr Tambuwal, was one of the party’s presidential aspirants.

He, however, made a last minute withdrawal and urged his supporters to vote for former Vice President, Atiku Abubakar at the convention.

Buoyed by the withdrawal, Mr Atiku defeated Mr Wike and other aspirants in the race to emerge the PDP presidential candidate.

Hours after the convention, Mr Ayu visited the Sokoto governor at his Abuja’s residence to thank him for stepping down for Mr Atiku.

Mr Ayu’s arrival at Mr Tabuwal’s residence was captured in a video clip.

“Thank you, thank you. You are the hero of the convention,” Mr Ayu told his host, Governor Tambuwal.

I could have scuttled PDP primary – Wike

Governor Wike, who came second the primary conducted in May, was not happy that Mr Tambuwal was accorded a second opportunity to address the delegates which he announced his withdrawal from the race and endorsed Mr Atiku.

Mr Wike vented his anger on the party leadership for allowing Mr Tambuwal to speak the second time, a development Mr Wike described as violation of “guidelines and procedure.”

“If I wanted to scuttle the convention, I could have done that and I told them. There are people you think are human beings but are not human beings.

“I have never seen how people can violate procedures and guidelines. Somebody had spoken, it is only at that point he was speaking that he can say I have withdrawn. You don’t call him back,” Mr Wike said, referring to Mr Tambuwal.

After the primary, the PDP has been enmeshed in a crisis which, as many feared, could affect the performance of the party in the 2023 presidential election.

Mr Wike, backed by Governors Makinde of Oyo, Okezie Ikpazu of Abia, Ifeanyi Oquanyi of Enugu and Samuel Ortom of Benue, has been demanding the resignation of Mr Ayu.

The governors are calling for Mr Ayu’s resignation to achieve a “regional balance”, since the party chairman and Mr Atiku are both from northern Nigeria.

It is not clear if Governor Wike and members of his group would join the PDP presidential campaign if their requests are not met.