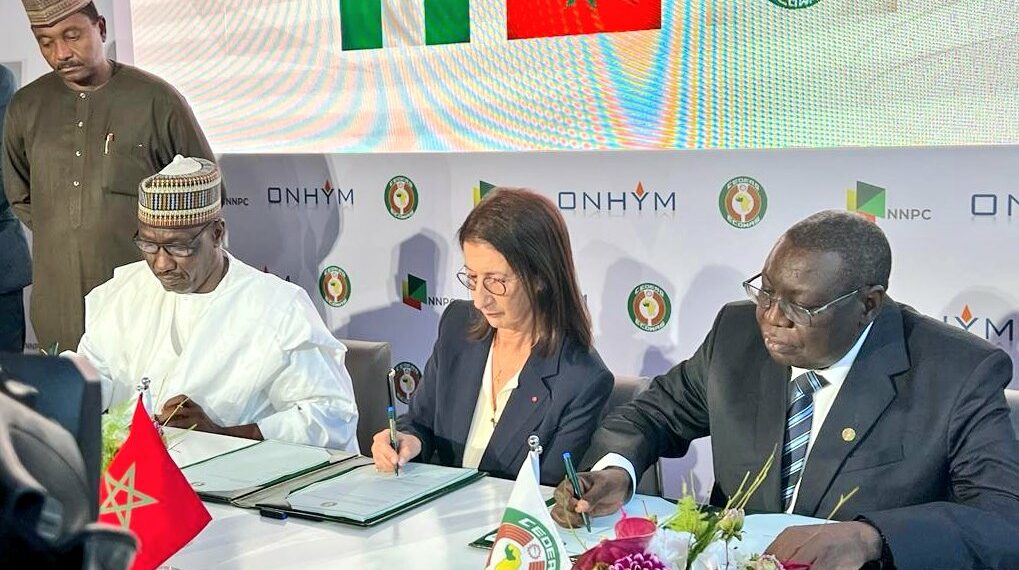 The pipeline will originate from Brass and terminate at North of Morocco, where it will be connected to the existing Maghreb European Pipeline that goes to Spain.

The Nigerian National Petroleum Company (NNPC) Limited on Thursday signed agreements on the gas pipeline project with the National Office of Hydrocarbons and Mines of Morocco and the ECOWAS Commission.

NNPCL in a statement said the two countries and ECOWAS executed the Memorandum of Understanding agreement on the project in a ceremony held at Hotel Sofitel in the Moroccan Capital.

It said it is a significant step in fulfilling the federal government’s drive toward harnessing Nigeria’s abundant gas resources.

The Nigeria-Morocco Gas Pipeline was proposed in a December 2016 agreement between the NNPC and the Moroccan Office National des Hydrocarbures et des Mines (National Board of Hydrocarbons and Mines).

The Federal Executive Council in June authorised the NNPC to enter into an agreement with ECOWAS for the construction of the pipeline.

The government says the gas pipeline, designed to be 7,000km long, will reduce gas flaring in Nigeria and encourage the diversification of energy resources in the country while cutting down poverty through the creation of more job opportunities.

It will further encourage utilisation of gas in the sub-region for cooking, and discourage desertification.

The pipeline will originate from Brass Island (Nigeria) and terminate at North of Morocco, where it will be connected to the existing Maghreb European Pipeline (MEP) that originates from Algeria (via Morocco), all the way to Spain.

Speaking at the signing ceremony, the Group Chief Executive Officer of NNPC Ltd, Mele Kyari, described the development as a very important milestone in the Nigeria-Morocco gas pipeline project in which all the key stakeholders in the project have come together to reaffirm their commitment to delivering on the project.

Mr Kyari said the project will also create wealth, and improve the standard of living of people in countries in the African region.

“Some of the benefits include the creation of wealth and improvement in the standard of living, integration of the economies within the region, mitigation against desertification and other benefits that will accrue as a result of reduction in carbon emission,” he said.

He noted that the NNPC will facilitate the continuous supply of gas and provide other enablers such as the required land for the first compressor station for the pipeline to be deployed in Nigeria which is among the thirteen stations earmarked along the pipeline route.

“NNPC is well-positioned to progress the project by leveraging its experience and technical capabilities ranging from gas production, processing, transmission and marketing as well as its vast experience in executing major gas infrastructure projects in Nigeria,” Mr Kyari said.

He said the government of Nigeria and the Kingdom of Morocco stand to benefit immeasurably from the execution of the project which extends beyond the supply of gas to energize the countries along the route.

“Signing the agreement on behalf of Nigeria was the Group Chief Executive Officer of NNPC Ltd, Mallam Mele Kyari; while Dr Amina Benkhadra, Director General of Morocco’s National Office for Hydrocarbons & Mines (ONHYM) signed on behalf of her country. Mr Sediko Douka, the ECOWAS Commissioner for Infrastructure, Energy and Digitalization signed on behalf of the sub-regional organisation,” it said.