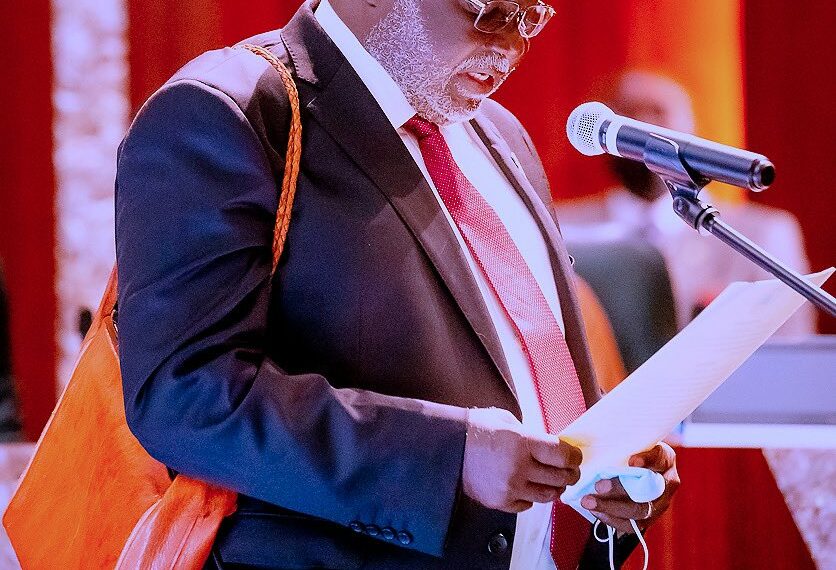 With Mr Aboki’s exit, the number of judges on the Supreme Court bench dropped to 13 - falling short, by eight, of the 21 judges the Nigerian constitution provides as the full complement of the court's bench.

The Acting Chief Justice of Nigeria (CJN), Olukayode Ariwoola, says the depletion of the number of judges on the Supreme Court’s bench burdens the apex court.

Mr Ariwoola spoke in Abuja, on Thursday, at a valedictory ceremony of a retired Justice of the Supreme Court, Abdu Aboki. He retired from the court on 5 August after clocking the mandatory retirement age of 70.

The Supreme Court announced Mr Aboki, who hails from Kano State, on Sunday.

With Mr Aboki’s exit, the number of judges on the Supreme Court bench dropped to 13 – falling short, by eight, of the 21 judges the Nigerian constitution provides as the full complement of the court’s bench.

“His Lordship’s exit from our fold has drastically depleted our ranks and opened a yawning gap that will hardly be filled,” Mr Ariwoola said.

Reacting to the CJN’s concern, the Body of Senior Advocates of Nigeria (BOSAN), faulted the appointment process of judges to the appellate courts.

Onomigbo Okpoko, a Senior Advocate of Nigeria (SAN), who spoke on behalf of the body, said the “appointment process appears to have been designed and operated to exclude good and competent lawyers” from being appointed Justices of appellate courts.

He pointed out the policy of Nigeria’s geographical spread in public service appointments as being “the foundation for the mediocrity and incompetence.”

He said the replacements for English judges at independence were “picked from among the best lawyers and judges of the time.”

The body queried the rejection of the nominations of the Nigerian Bar Association (NBA) for appointment to the Supreme Court by the immediate-past CJN, Tanko Muhammad.

In 2017, some accomplished lawyers in the country were nominated by the NBA for appointment to the Supreme Court bench.

But, the nominees comprising advocates and academics in the legal profession, never got to the Supreme Court.

‘Agitation for lawyers appointment to appellate courts won’t go away’

The body said judges appointing authority, the National Judicial Council (NJC), which the CJN chairs, “should appoint the best candidates of our country to man the courts.”

“The agitation in this respect will not go away any time soon,” Mr Okpoko said.

Appointing lawyers from the bar directly to the Supreme Court bench is a rare occurrence in Nigeria, even though it is supported by the constitution.

Mr Okpoko cited the appointment of Augustine Nnamani from the Bar to the Supreme Court bench.

He said “the appointment of appellate judges is not a promotional exercise” that excludes lawyers, adding “the National Judicial Council ignores” the pool of lawyers from the Bar and academia but “prefers to appoint candidates (to the appellate courts) on the basis that they have served…as judges.”

Mr Okpoko expressed hope that the CJN and the NJC “will look into the matter favourably.”

To be eligible for appointment to the bench of the Supreme Court, an applicant must be a legal practitioner of not less than 15 years. The same applies to whoever is to be appointed as the Chief Justice of Nigeria.

Section 231(3) of the Nigerian constitution states: “A person shall not be qualified to hold the office of Chief Justice of Nigeria or of a Justice of the Supreme Court, unless he is qualified to practise as a legal practitioner in Nigeria and has been so qualified for a period of not less than fifteen years.”

The foregoing provision created the window for any legal practitioner who has plied the trade for not less than 15 years to be appointed as a Justice of the Supreme Court.

In his valedictory speech, Mr Aboki called for transparency in the expenditure of funds belonging to the judiciary.

Mr Aboki in the speech subtitled, ‘My valedictory messages to the nation and judiciary in particular,’ called on “those in charge of administering the funds allocated to the judiciary” in Nigeria “to be prudent, transparent and accountable.”

There have been calls for the judiciary to disclose details of its budgetary allocations and expenditure.

On judges appointment, he advised the NJC to “place greater premium on merit than national character and other primordial considerations.”

The retired justice urged the National Assembly to amend the constitution to reduce the number of appeals that go to the Supreme Court. This, he said, would lessen the workload of the apex court.

Eulogising the celebrant, the CJN described Mr Aboki as a “man of dignity and distinction” whose “mastery of the law stands him out.”

Mr Ariwoola said Mr Aboki’s “name has been etched in gold” having “offered 46 years of his life in the service of his fatherland.”

The Attorney-General of the Federation and Minister of Justice, Abubakar Malami, said Mr Aboki “brought to the task of adjudication, an acute sense of fairness and empathy.”

Mr Malami who was represented by the Permanent Secretary, Federal Ministry of Justice and Solicitor General of the Federation, Beatrice Agba, thanked Mr Aboki for his contributions to the advancement of the law.

The President of the NBA, Yakubu Maikyau, a SAN, lauded the retired jurist for his expansion of the frontiers of law practice.

Why Nigeria must add value to its cashew nuts — Obasanjo