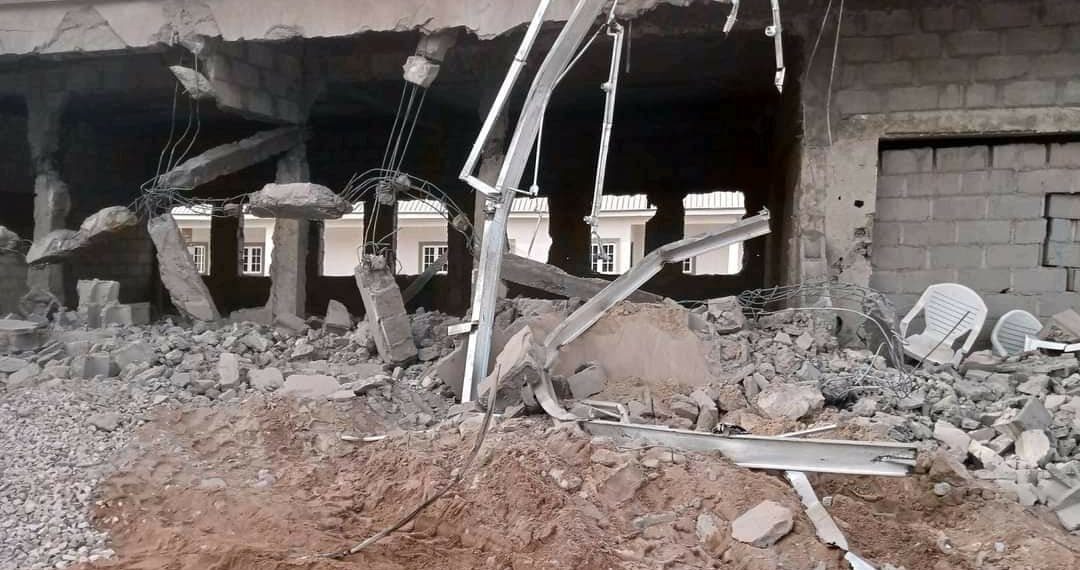 The campaign office was demolished despite a court order stopping government agents from destroying the property.

The governorship candidate of the People’s Democratic Party (PDP) in Gombe State, Muhammad Barde, has accused the state government of masterminding attacks on his campaign office.

This is as the spokesperson to the governor, Ismail Misili, said Mr Barde was only trying to create a problem out of nothing to score cheap political points.

In a statement sent to PREMIUM TIMES, Mr Barde said the frontage of his party office was destroyed by “agents” of the government.

He said the Gombe State Urban Development Agency led by one Captain Bilal violated a court order stopping the agency from demolishing his campaign office after the frontage of the office was destroyed by officials of the agency.

“Our attention is drawn to the increased attacks by the Gombe state government to our campaign office and other apparatus of our party by agents purportedly sent by the state government. The first was done by an agency of the government, Gombe state Urban Development Agency under the directive of one Capt. Bilal, after violating the court order issued on the eighteenth of march, the agency thus went ahead to demolish the front row of the campaign office,” Mr Barde alleged in the statement.

In a court order seen by PREMIUM TIMES, dated 18 March, the Gombe High Court 11 issued an interim injunction restraining the defendants from demolishing the office.

Gombe State Government, the attorney-general of the state, and Gombe Urban Planning and Development Agency were the defendants.

The Incorporated Trustees of Gombe Good Leadership Association, an organisation affiliated with the PDP candidate, was named as the plaintiff.

“An order staying or prohibiting the defendants from acting on Demolition Notice marked on the plaintiff’s building situate and being at Jekadafari Liberty Stadium junction,” Gombe State pending the plaintiff’s motion on notice,” the injunction further stated.

Mr Barde further accused the Gombe Urban Planning and Development Agency of bias for not demolishing the campaign buildings of the incumbent governor and candidate of the ruling All Progressives Congress (APC), Inuwa Yahaya.

“Asides from the attacks on our offices we have noticed with dismay the way and manner these agents avoided the state governor campaign offices and objects showing a motive that is divisive and partisan.”

He said the land where the campaign building is situated was originally allotted by the state’s urban planning authority for the erection of a billboard and not to build a campaign office as the place is directly facing the Presidential Lodge.

“This is where the president or any important guest is kept, how then do you expect a political party to be allowed to open an office there? Even if it’s the ruling party, APC, the governor would not allow that,” Mr Misili said.

Commenting on the court order stopping the demolition, Mr Misili said the order was not served to the State Government or the Gombe Urban Planning and Development Authority.

In a three-page response to the Principal Partner of Gedeba Solicitors, Mr Barde’s legal representatives, the Gombe Urban Planning and Development Authority said it has no official engagement with the PDP candidate.

The urban authority further claimed its agreement with Gombe Leadership Association was for it to erect billboards at the location, but the organisation went ahead to erect buildings contrary to what was approved.

“That consequent upon the above the authority served the association with all the statutory notices to regularize their documentation with the authority for it to continue with the construction, but it proves abortive. The authority was left with no option but to demolish the illegal structure,” the letter read.

The urban authority said the ex parte order secured by Mr Barde has nothing to do with him.

“That after the demolition of the said association’s illegal structure, it went to court and obtained the said ex-parte order in suit no; GM/62m/2022 between Gombe Good Leadership Association and the Gombe State government and three Ors

“That the said ex-parte order has no nexus with your client because he is not a party to the suit which is pending before the High Court.

“That your client, having been donated with the premises of Gombe Good leadership Association, owes a duty to effect the change of ownership to the relevant government agency to reflect the new owner of the premises before embarking on any development on the premises.

“That your client ought to know that for him to embark on any development on the premises of Gombe Good Leadership Association he must obtain approval from the Authority.

“That your client is not connected/affected by the ex-parte order nor a party in suit no; GM/62m/2022 between Gombe Good Leadership Association Vs Gombe State Government and 3 others pending before the High Court,” the statement added.

The urban authority insisted that Mr Barde should not have gone ahead to erect a building on the premises since he knew it was “subject to litigation.”

The lawyers were asked to advise Mr Barde to “comply with the extant development control laws/regulations in the state to enjoy a peaceful possession of his property.”

It is provocative – PDP

The National Headquarters of the People’s Democratic Party has reacted to the demolition of the campaign office, calling it cowardly and provocative.

The party’s spokesperson, Debo Ologunagba, in a statement asked the state government to rebuild the destroyed building.

“The PDP, without any equivocation, demands that the Gombe State Government should immediately rebuild the demolished Campaign Office and tender unreserved apology to the people of Gombe State.

“Governor Inuwa Yahaya is in mortal fear of the PDP Gombe State Campaign office which has become the rallying point of the people in the determination to liberate their State from the misrule and stranglehold of the APC administration.”

The party said the governor of the state would be held responsible for the breakdown of law and order in the state as a result of his alleged persecution of the opposition candidate. He asked President Muhammadu Buhari to call the APC-led government in the state to order.

“Our Party cautions Inuwa Yahaya to note that he has been exposed and would be held responsible for any breakdown of Law and Order as well as any terrorist attack in Gombe State ahead of the elections.

“The PDP, therefore, invites President Muhammadu Buhari to call Governor Inuwa Yahaya to order before he causes another mayhem in Gombe State.

“We also charge the Inspector General of Police to order an investigation into the use of police operatives to attack the people of Gombe State to facilitate the demolition of the Campaign Office,” he said.