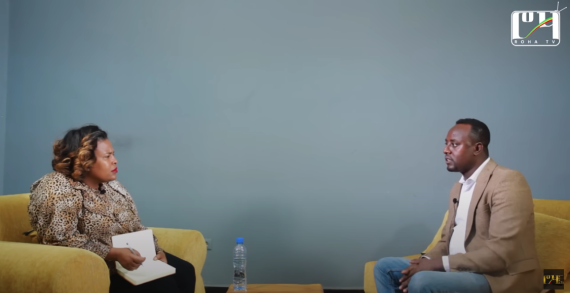 On Thursday, September 8, authorities brought both Gobeze and Meaza before the Federal First Instance Court, Lideta branch, in Addis Ababa, according to Henok.

The Committee to Protect Journalists on Monday called for the immediate and unconditional release of Ethiopian journalists Gobeze Sisay and Meaza Mohammed, and urged authorities to stop arresting members of the media for their work.

About 8 a.m. Wednesday, September 7, federal police officers arrested Gobeze, editor and founder of privately owned YouTube-based broadcaster The Voice of Amhara, from his home in the capital, Addis Ababa, according to news reports, his brother Kedir Sisay, and one of his lawyers, Henok Aklilu, who both spoke to CPJ by phone. At around 5 p.m. that day, police officers arrested Meaza, founder and chief editor of privately owned YouTube-based news channel Roha TV, while she was shopping, according to news reports, her husband Robel Gebeyehu and Henok, also one of her lawyers, who both spoke to CPJ by phone.

On Thursday, September 8, authorities brought both Gobeze and Meaza before the Federal First Instance Court, Lideta branch, in Addis Ababa, according to Henok. However, citing time constraints, the court adjourned their case until Friday, September 9, when authorities did not file formal charges but said they were holding the two journalists on suspicion of having links with the Tigray People’s Liberation Front, a rebel group at war with the federal government, and attempting to terrorize the public by disseminating information that supports the rebel group through various media platforms, according to a court document reviewed by CPJ. The document did not specify the content in question or when it was published. Robel told CPJ that the court granted police seven more days to keep them in custody while investigating the case.

Both journalists have been arrested previously in connection to their work. Meaza was held without charge for several weeks following arrests in December and again in May, according to CPJ reporting and media reports. In May, armed men thought to be military officers abducted and detained Gobeze for over a week without ever producing him in court, as CPJ documented at the time.

“Ethiopian journalists should not have to work under threat of arrest. The pattern of throwing critical journalists behind bars, which has become entrenched during the civil war, must be reversed,” said CPJ sub-Saharan Africa representative, Muthoki Mumo. “Police should release Meaza Mohammed and Gobeze Sisay, and ensure that they do not face further harassment in connection to their work.”

CPJ has documented a drastic deterioration in press freedom in Ethiopia amid an ongoing civil war. Since November 2020, when the war started, at least 63 journalists and media workers have been arrested in the country, often without formal charges, according to CPJ research. Some of those arrested have been accused of supporting or communicating with the rebel group, which was declared a terrorist organization by Ethiopia’s parliament in 2021, as CPJ has documented.

Recently, federal government officials warned members of the press against reporting misinformation or “promoting the terrorist group’s agenda,” according to media reports.

In a statement sent over messaging app, federal police spokesperson Jeylan Abdi told CPJ that he could not comment on the specific cases of Gobeze and Meaza because they were pending in court, adding that anyone violating the law would be held liable, whether or not they are a journalist.