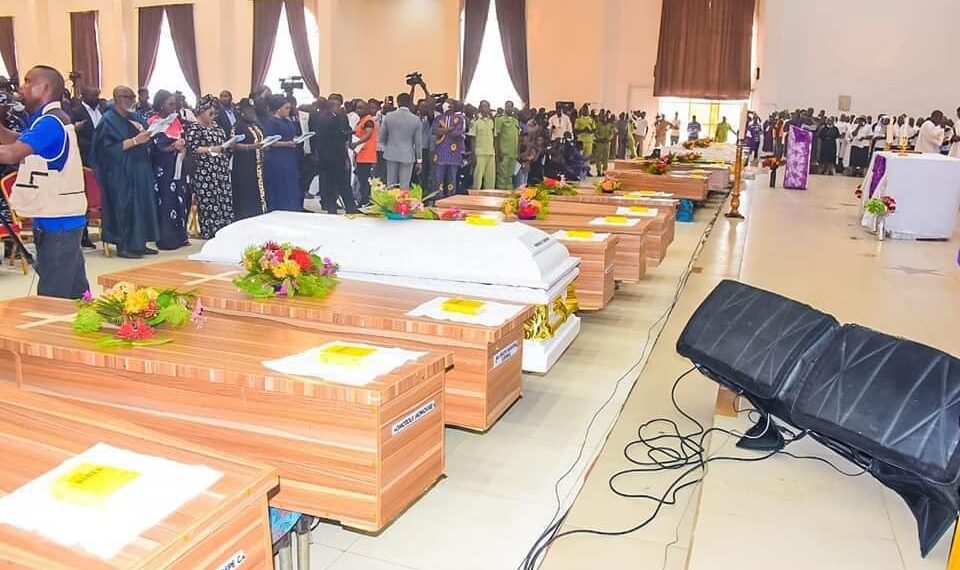 Remains of the victims of the St. Francis Catholic Church, Owo attack at the funeral service on Friday.

The Ondo State Government has made financial donations to survivors of the terrorist attack on St Francis Catholic Church in Owo.

The gesture is occurring over three months after the attack which left 41 persons dead and several others injured.

The attack had attracted a number of donations from well-meaning citizens who pledged support for the victims and others who were affected.

Led by the state Commissioner for Finance, and the Chairman of the Donation Management Committee, Wale Akinterinwa, the committee gave cash donations to the affected persons in Owo on Tuesday.

Aside from the cash, the state government also donated about 120 bags of Garri to the victims to provide succour for victims and their families.

Other members of the committee include Special Adviser to the Governor on Union Matters and Special Duties, Dare Aragbaiye; Commissioner for Health, Banji Ajaka; representative of the Commissioner for Women Affairs and Social Development, Adebunmi Osadahun; representative of Olowo of Owo, Amos Aladeseye; and the Secretary of the Committee, Kayode Edema.

The committee members were received by the Church’s Priest, Joseph Anagu, who is also a member of the committee.

Addressing the victims and families of the deceased, Mr Akinteriwa noted that the donation was in fulfilment of the promise made by Governor Oluwarotimi Akeredolu to give the required support to all the victims of the attack.

Mr Akinterinwa explained that the committee had carefully collated the names of both injured and deceased to provide succour for them.

“This is another series of support the Ondo State Government is giving to the victims,” he said.

“What we have done on this occasion is to collate all the victims, families of the deceased and the injured, based on the funds we have received into the account we opened.

“We felt that it was proper with the approval of the governor to reach out to these families and that is why we are here today.

“We have given each of the families of the deceased and the injured cash gifts and as we receive more funds into the account, we will continue to disburse.

“At the end of the day, we will make public all the funds received, the amount received from home where we were allowed to and it will be transparent and how it was judiciously utilised.

“We want to thank all those who have donated on behalf of the Ondo State Government, we thank them for their immense contribution, as God will continue to bless them.

“Also to let all the members of the public know that the account is still very much open and we are still expecting and willing to receive donations, it can never be too much and for those who still want to donate, our account will be made available. If you go to our website, you can still make donations.”

One of them, speaking on behalf of the beneficiaries, commended the state government for the gesture and expressed gratitude to the governor, describing him as one of his kind in the country.

He recalled that after the attack the governor pledged to support the victims “and he redeemed the pledge at a very critical time. We thanked the Governor for fulfilling his promise; for serving humanity and for bringing peace to this state.”