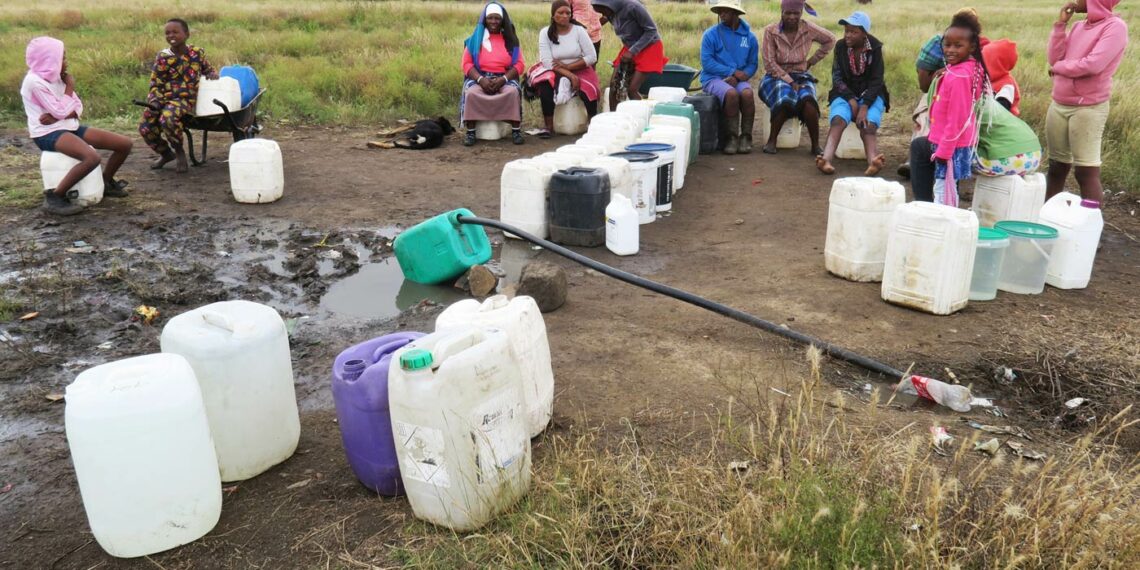 Residents of a new informal settlement outside Winburg gather to fill containers with water from a pipe supplied by the municipality. Sana Ntho, 54, said the water either has to be boiled or disinfected before drinking. With no electricity available, and firewood a scarce commodity, she adds a spoon of bleach to every 20-liter bucket of water.

Part of the reason Winburg’s water is contaminated is because the effluent released from the wastewater treatment works flows directly into the dam used for the town’s drinking water.

Having spent much of his adult life working in the coal mines in Welkom, pensioner Hendrik Tlaudi says he now suffers from a bad back and must take medication on a daily basis. But Tlaudi, who lives in a state-subsidized house with his widowed sister in Winburg, about an hour from the mines, cannot simply pour a glass of water from the tap to swallow his pills.

Like everyone else in this town in South Africa’s Free State, he has to boil tap water first. Since the municipal water supply is often contaminated with bacteria from human feces, he risks getting diarrhea and stomach cramps if he doesn’t do so.

And like most people living in the poorer section of the town, who survive on meager state pensions and grants, Tlaudi’s household does not always have enough money to buy the electricity or paraffin needed to boil the water. On those occasions, he says, his sister’s two teenage children have to scrounge the surrounding countryside for firewood to burn.

Part of the reason Winburg’s water is contaminated is because the effluent released from the wastewater treatment works flows directly into the dam used for the town’s drinking water. This would be acceptable if the sewage was properly treated, and if the water purifying plant at the dam was functioning properly.

However, when this reporter visited the wastewater treatment works in March, it was completely broken down, and the water purifying plant was dilapidated. Official entry to the plant was barred, but from the outside it was clear that standard building maintenance had not taken place. Shrubs and small trees could be seen growing from the gutters and cracks in the walls.

Data from the national Department of Water and Sanitation (DWS) Integrated Regulatory Information System (IRIS) shows that wastewater treatment works in Winburg and beyond are, in the words of the latest Green Drop report – a regulatory audit of the country’s wastewater treatment works – in a “critical state.” The report goes on to say they “need urgent intervention for all aspects of the wastewater services business.” 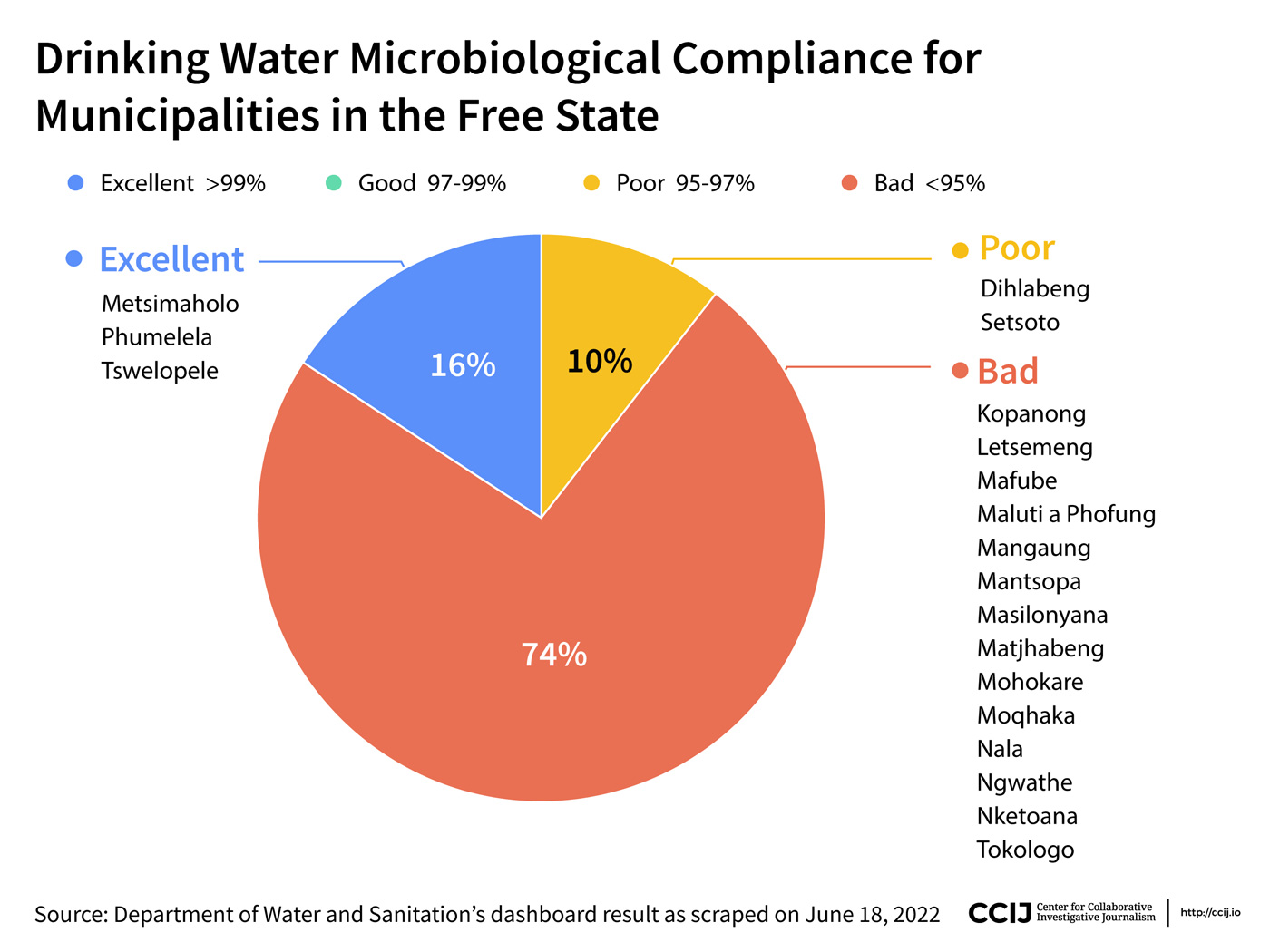 The Winburg wastewater treatment works, as of June 18, scored 0% for all three indicators on the IRIS dashboard. This is indicative of the municipality not achieving the basic requirement of providing regular test results to the regulator.

It did not fare much better on the drinking water front. Data publicly available on the IRIS dashboard shows Winburg’s municipal water supply currently meets national microbiological quality guidelines just 55.6% of the time. Worse yet, it complies with disinfectant standards just 11.1% of the time.

A municipal worker at the wastewater treatment works, who could not be named because he was not authorized to speak to the media, pointed out a critical pump in need of a fan belt, saying the pump had not been working for three weeks. Similarly, the aerator pump did not have a fan belt, and the sludge remover did not have a hose.

“All I can do is add chlorine,” the worker said, but he noted that what could be seen running through the plant came from the storm water system filled by recent rains. The filthy water was flowing through the sewage ponds, stirring up the sludge and flowing out to the dam.

Some sewage wasn’t even getting to the wastewater treatment works, he said. It was flowing to the dam from a broken down pump station further up the line.

He said after the company completed the work, which included fixing the aerators essential to purifying the sewage, “some genius” in the municipality decided to move the generator to another facility. However, the electrical lines ran through the generator, so without it there was no power, and the wastewater treatment works could not function. Masilonyana municipality spokesperson Zongezile Ntjwabule said the generator was moved due to “an electrical crisis” that occurred in nearby Brandfort.

Rewiring it was a simple job of reconfiguring the incoming line, which any qualified electrician could do, the contractor said. Yet this had not been done. Ntjwabule said the municipality is currently working to address the “faulty cables,” responsible for cutting off power supply to the Winburg wastewater treatment plant.

The contractor added that the company advised the municipality it needed to replace the town’s sewerage pipes, which were old asbestos-laden pipes that were continually rupturing. “They were breaking in people’s yards,” he said.

All effluent from the wastewater treatment works, as well as sewage from broken sewerage lines and pump stations, flowed to the dam where drinking water was drawn. But even if the water purifying plant at the dam was working properly, it wasn’t designed to clean water contaminated by sewage, he said.

Documents circulated in the June municipal council meeting shows a consultant, a civil engineering firm and both an electrical and mechanical contractor were appointed to refurbish Winburg’s water purification plant in January 2019. “However, due to poor performance, both the Contractor and consultant were terminated (sic),” states the document.

Then a new consultant was appointed in August 2021, along with the same electrical and mechanical contractor, with a R25.6 million ($1.5 million) refurbishment budget.

In addition to refurbishment of mechanical works, electrical works and piping, there was also exterior work, such as landscaping, surfacing of the road, roof works and brick works listed in the document. As of March, it was clear no such exterior work had been done.

Winburg resident and municipal councilor Brunhilde Rossouw said the consultant and contractors arrived on site in August 2021, “but very, very little” work took place, with no work having been done since October last year. Ntjwabule said the contractors appointed in August had since been terminated due to irregularities in their supply chain management process.

Winburg – the site of a former Boer war concentration camp – falls within the Masilonyana local municipality, which includes the towns of Theunissen, Verkeerdevlei and Brandfort.

While Winburg’s failure to provide clean drinking water is striking – in that the supply dam is polluted with untreated effluent from the wastewater treatment works – it is not unique. Drinking water supply fails to meet minimum standards throughout the municipality. 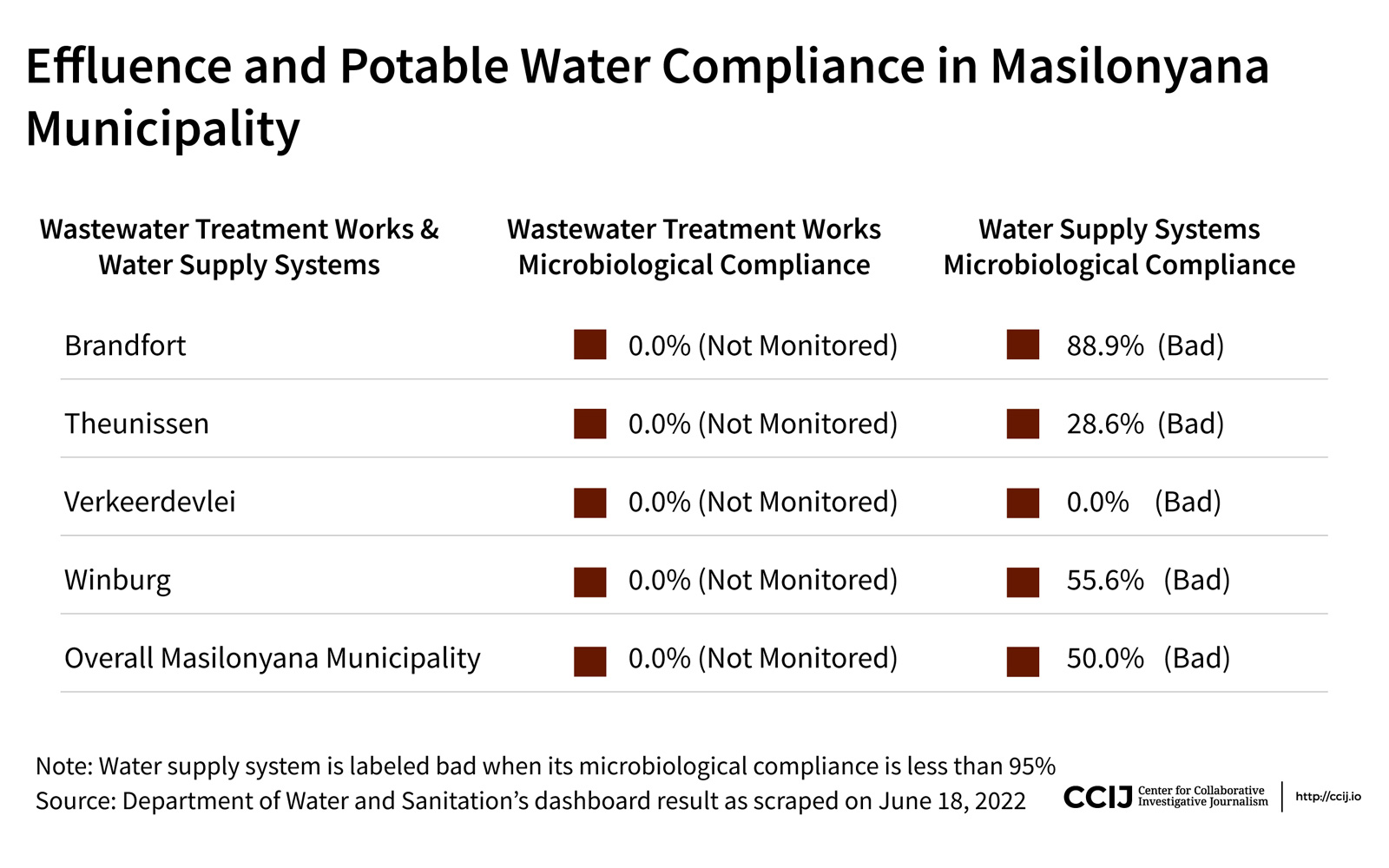 While Brandfort, although failing, performs best in terms of drinking water quality within the municipality, its supply is intermittent. Therefore Brandfort residents keep containers at hand and fill them up whenever there is water in the taps.

Nombulelo Motupi, who shares a house in Slovo Park, a neighborhood in Brandfort, with her parents, four siblings, her sister-in-law and her child, said there was no water in the taps on March 25. The last time there had been water was three days prior – on March 22. “We fill a drum when we have water,” said Motupi.

Douglas Kheswa, who is unemployed and lives in a backyard shack in Slovo Park with his partner and baby, said on average water flows through the taps one day a week. Kheswa said if they run out of the water saved in containers, they approach people in town who have private boreholes for clean drinking water. “They give it,” he said.

Similarly, in Winburg, much of the town fetches clean drinking water from a local church borehole on Mondays, Wednesdays and Fridays.

Winburg resident Cornel Brown spoke while pushing five-liter containers of water from the church to her home in a pram. Brown said she doesn’t even like to use the municipal water to wash herself. “It burns my skin. I have to add bicarbonate of soda to the bath.” She said the municipal water has been undrinkable since she moved to Winburg six years ago.

But the Masilonyana municipality is just one of 19 municipalities in the Free State, all of which are in similar states of disarray. As of June, only three municipalities in the province had drinking water that met minimum microbiological compliance standards. These were Tswelopele (comprised of Bultfontein and Hoopstad), Metsimaholo (comprised of Sasolburg, Deneysville and Oranjeville) and Phumelela (comprised of Warden, Memel,and Vrede). Only Tswelopele and Mestsimaholo met both microbiological and chemical compliance standards.

Effluent data from June shows, in terms of wastewater treatment, only the Mohokare municipality (comprised of Smithfield, Rouxville and Zastron) met the minimum effluent standards set by the DWS. 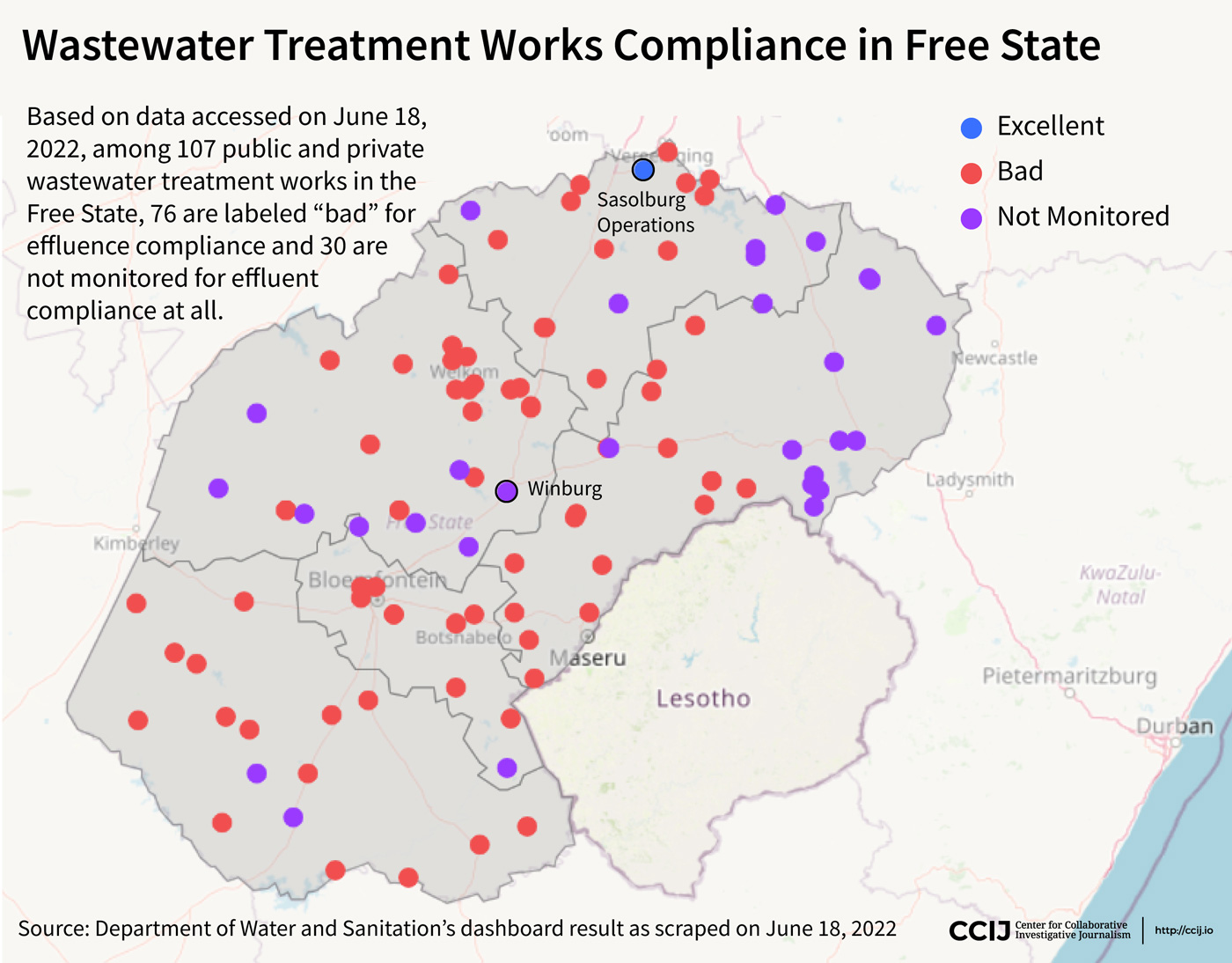 Of the 19 municipalities, 17, including the Masilonyana municipality, were placed under regulatory focus and given 60 days from the date of publication of the report to submit a detailed corrective action plan. The plan had to map the activities, responsible persons, timelines and expected improvements.

That deadline would have been May 31. Asked whether any corrective action plan had been submitted, Ntjwabule said Masilonyana had not met the May deadline. However, he said, with the help of DWS, the municipality was now working on launching a study into how best to upgrade its wastewater treatment plants. Despite multiple calls, DWS did not respond to requests regarding whether the remaining municipalities had met or missed the same deadline.

In the meantime, rivers and dams across the province are continuously polluted by sewage, while Tlaudi, Motupi, Kheswa, Brown and millions of other Free State residents have to boil their drinking water, or fetch it from boreholes owned by individuals or institutions willing to share a potable supply.

This investigation was produced in collaboration with the Center for Collaborative Investigative Journalism and OpenUp, with the support of OSF-SA.

A version of this article was first published by GroundUp.