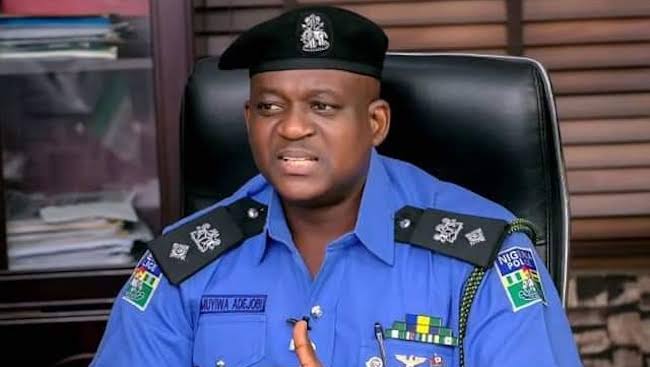 The spokesperson for the Nigeria Police Force, Muyiwa Adejobi

The spokesperson for the Nigeria Police Force came under a barrage of criticism on social media Tuesday after he tweeted that he was on the phone while driving.

Muyiwa Adejobi, the Force PRO, said he was making a phone call while driving in Abuja when he was stopped by an official of the Federal Road Safety Corps.

He said the FRSC official then overheard him instructing a Divisional Police Officer to “put one person in d cell” and allowed him to go.

“This is to say ‘to every rule, there must be an exception to save some situations.’ Lol.”

I was driving today in abuja, and one road safety officer who wanted to arrest me for using phone, heard me instructing the DPO to put one person in d cell, he just saluted me, and passed me. This is to say "to every rule, there must be an exception to save some situations". Lol

Mr Adejobi’s tweet was greeted with harsh criticisms from social media users, and he later walked back his story saying he wanted “to test the strength of fake news.”

Making a phone call while driving is a violation of Nigeria’s traffic law and attracts a six-month jail term, according to the FRSC.

Rinu Oduala, a project director at The Hub Nigeria, reacted to Mr Adejobi’s tweet, saying he broke the law.

“Any wonder why your own officers also act like they are above the law?

“You broke traffic rules, “put a person in a cell”, used your office to escape the law, then proceeded to cover everything with, “to every rule, there must be an exception. If Nigeria was a tweet.”

Chidi Lemchi, a social media user, said, “You’re a policeman I respect a lot here. You and Mr Benjamin and one of the brilliant minds in the police. To not see that your action is an abuse of authority is disappointing.”

He added that whether there is an exception to the rule or not, “it still doesn’t excuse the fact that you were using a mobile phone whilst driving.

“There can be no exception to making sure all road users are safe!”

Abdul Fatah, another social media user, said the law is made for everyone to obey.

“Instructing ur DPO to detain a suspect shouldn’t be your weapon of intimidation neither it’s an emergency. You could’ve pulled over to use your phone. Reflect on this,Mr officer.”

While the majority criticised the PRO, @iamonyenonu advised him to lead by example.

“I understand there are exemptions to rules but this particular one isn’t necessary sir. You could use hands free and avoid breaking the rule.

“Trust me, some of your junior colleagues in this space would misuse this and stand on this quote of yours.”

“This Kind Of Exception Is Inexcusable & Unpardonable. You Should Have Parked To Give The Order, Sir,” @yinkaisola tweeted.

“Many Nigerians, Particularly The Civilians Received Fines & Insults Even When They Have Strong Reasons To Use Phones While Driving.

After the tweet by Mr Adejobi, a Chief Superintendent of Police, garnered thousands of criticisms of his action, he was forced to put out another tweet seven hours later saying the incident “did not even happen.”

It did not even happen, bc i dont drive myself while on duty, except off duty, and road safety officers dont operate beyong 6pm, or max 7pm. I only tested the strength of fake news, and we can see how its spreading like harmattan inferno. https://t.co/ZjWuIQ2sOI

It did not even happen, bc i don’t drive myself while on duty, except off duty, and road safety officers don’t operate beyong 6pm, or max 7pm. I only tested the strength of fake news, and we can see how its spreading like harmattan inferno,” he tweeted.

He also called for “more education on assimilation and education.”

A former vice-president of the Nigerian Bar Association (NBA), Monday Ubani, told this newspaper that if Mr Adejobi lied about his earlier statement, it means that he lacks integrity.

“If it is true that he tweeted admitting that he committed a traffic offence, if he now withdraws that tweet and now says it is fake news whereas he knows in his heart that it was not fake news, then he is the one that is fake. And he lacks integrity, that’s what it means.”

Bisi Kazeem, the FRSC spokesperson, said the officer could have let Mr Adejobi go as a “sign of respect” but “there are no exceptions to the rule.”

But Olusegun Ogungbemide, the FRSC Lagos Sector Commander, said he spoke with Mr Adejobi about the incident and he insisted it didn’t happen.

“He (Mr Adejobi) confirmed that such never happened. He’s working on a communication module and reaction analysis,” Mr Ogungbemide said via a WhatsApp message.