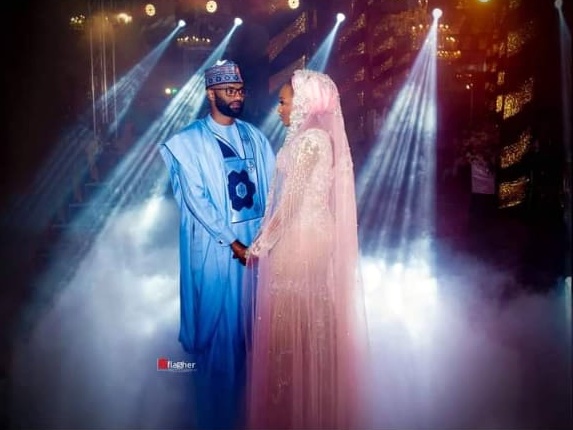 The groom, Mr Danfulani, is the son of a popular Zamfara business tycoon, Shehu Danfulani, the owner of Yazid Hotels Limited in Kaduna.

Many bigwigs of the opposition People Democratic Party (PDP) including its presidential candidate, Atiku Abubakar, and running mate, Ifeanyi Okowa, on Saturday, attended the wedding of the daughter of a former Governor of Jigawa, Sule Lamido, Surayya.

Surayya married her heartthrob Yazid Danfulani, the commissioner of commerce and Industries in Zamfara State.

The wedding was held at the country home of Mr Lamido, in Baimana, Birnin Kudu Local Government Area. The ceremony was presided over by Kafil Suleiman, the Imam of Bamaina town.

The PDP presidential candidate, Mr Atiku, stood as the bride’s trustee while the Deputy Governor of Zamafara, Mr Nasiha served as the groom’s trustee.

The Imam, Mr Suleiman announced the payment of N100,000 as the bride’s price, after which the trustees of the groom and bride announced their consents to the union.

The groom, Mr Danfulani, is the son of the popular Zamfara business tycoon, Shehu Danfulani, and the owner of Yazid Hotels Limited in Kaduna.

Governors at the event include Inuwa Yahaya of Gombe State; Aminu Tambuwal of Sokoto State; the National Chairman of the PDP, Iyorchia Ayu; and members of the party’s Board of Trustees led by Walid Jibril.

Also at the event were the former Governors of Bauchi Gombe and Kaduna states, Adamu Muazu, Ahmad Makarfi, Ramalan Yero and Ibrahim Dankwambo among other dignitaries and traditional rulers.