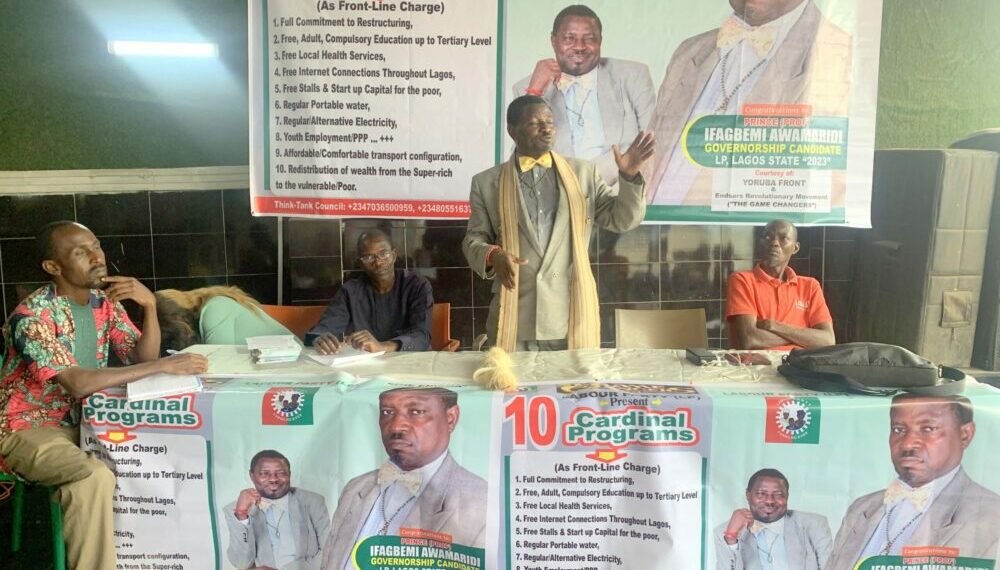 Mr Awamaridi said the party works with “constitution and not the imaginations of (some) individuals.”

The governorship candidate of the Labour Party (LP) in Lagos State, Ifagbemi Awamaridi, has insisted that he remains the party’s flag bearer in the 2023 race.

He spoke during an event tagged “Unveiling of her Governorship Candidate (Prof. Ifagbemi Awamaridi) and State Assembly Candidates” on Saturday at Avid Empire in Alagbado, Lagos.

Some members of the party leadership had conducted a substitution primary election on Thursday, where Gbadebo Rhodes-Vivour emerged as the gubernatorial candidate of the party.

Mr Rhodes-Vivour, who defected from the PDP, defeated Moshood Salvador, who joined the party from the APC.

Mr Awamaridi is, however, the candidate recognised by the election umpire, INEC.

He said he has decided to speak out because he can’t afford to be “complacent” after another aspirant has been declared the candidate of the party.

Mr Awamaridi said the party works with “constitution and not the imaginations of (some) individuals.”

He also said that he “came in through the Congress” and is the authentic state chairman of the party.

“I head the structure of the Labour Party… anyone that tells you he is the chairman, let him call the meeting of the genuine local government Exco’s,” he said.

Kayode Salako, another member of the party, identifies himself as the party’s state chairman in Lagos.

Mr Awamaridi further said that some members said that he has withdrawn from the race and has been moved to a “higher position.”

“So, why was I not there?” He said referring to the substitution primary election.

He said that Mr Rhodes-Vivour did not inform him of his governorship ambition.

He said that when Mr Rhodes-Vivour had earlier reached out to him to be his running mate he told him he would “think about it.”

“And the next thing I heard was that he bought the (governorship) form.”