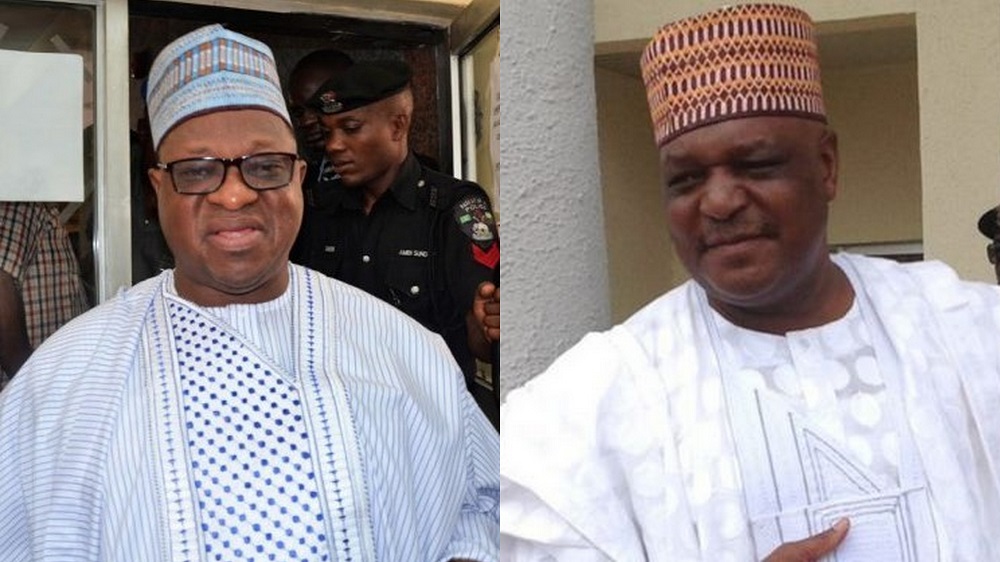 Messrs Dariye and Nyame recently released from Kuje prison where they were serving jail terms for corruption.

The Plateau State Governor, Simon Lalong, has led a special delegation to a former governor of the state, Joshua Dariye, to congratulate him on his release from prison.

Mr Dariye was recently released from Kuje prison where he was serving a 10-year-jail term for stealing public funds. He was released after he was pardoned by President Muhammadu Buhari.

Mr Lalong in a statement on Friday by Makut Macham, director of press and public affairs to the governor, said the delegation was meant to rejoice with Mr Dariye over the pardon granted him by Mr Buhari and his release from prison.

Mr Lalong also paid the same visit to a former governor of Taraba State, Jolly Nyame, who was also freed after being pardoned by the president.

Mr Nyame, like Mr Dariye, was convicted and sentenced to prison for stealing public funds while he was Taraba governor between 1999 and 2007.

The statement noted that Mr Lalong alongside his wife, Regina, National Assembly members as well as members of the State Executive Council first visited the residence of Mr Dariye to appreciate God for his release and encourage him and his family.

Mr Lalong told Mr Dariye that the entire state “received the news of his release with joy because they have been praying for him since his travails and incarceration happened.”

He said prayers and appeals were made to secure the pardon granted the ex-governor.

The governor, while appreciating Mr Buhari for giving Mr Dariye another opportunity, said this is the time for Mr Dariye to reflect and forgive people that may have offended him as has been his practice during previous challenges.

He narrated his ordeal in prison and said it was a difficult moment but God saw him through and made him survive.

Meanwhile, Mr Dariye has debunked speculations that he intends to contest for Plateau Central Senatorial District on the platform of the Labour Party (LP) in the 2023 general elections.

There were reports on social media, on Thursday, that the former governor had been given the ticket of the LP to contest in the forthcoming senate elections.

Mr Dariye debunked the rumour that he was running for Senate, describing it as unfounded and untrue as he has not bought form or done anything to that effect.

He advised politicians in the state to unite and rally around Mr Dariye in promoting the interest of citizens, saying governance is an opportunity for those in charge to do their best and leave posterity to judge their efforts.

After the visit to Mr Dariye, the statement said the delegation also visited the residence of Mr Nyame, who also expressed deep appreciation for the role Mr Lalong played to secure his pardon and release.

Mr Nyame said he was encouraged by the love and care shown towards him and Mr Dariye, saying the experience of the past will be put behind so that they can forge forward.

Governor Lalong, while congratulating him on his freedom, said the people of Taraba and Plateau states are excited about their release because both states share historical ties that have bonded them together over many years.

While urging Mr Nyame to also forgive anyone that might have offended him in the course of his ordeal, Mr Lalong said the act of forgiveness brings total healing and freedom.

The statement said prayers were offered at both visits for the good health, protection and safety of the two former Governors.

The news of the presidential pardon given to Messrs Dariye and Nyame by Mr Buhari has continued to generate public outcry from Nigerians who condemned the pardon granted the the ex-governors.

President Buhari, however, pardoned the two ex-governors on 14 April using his presidential prerogative of mercy.