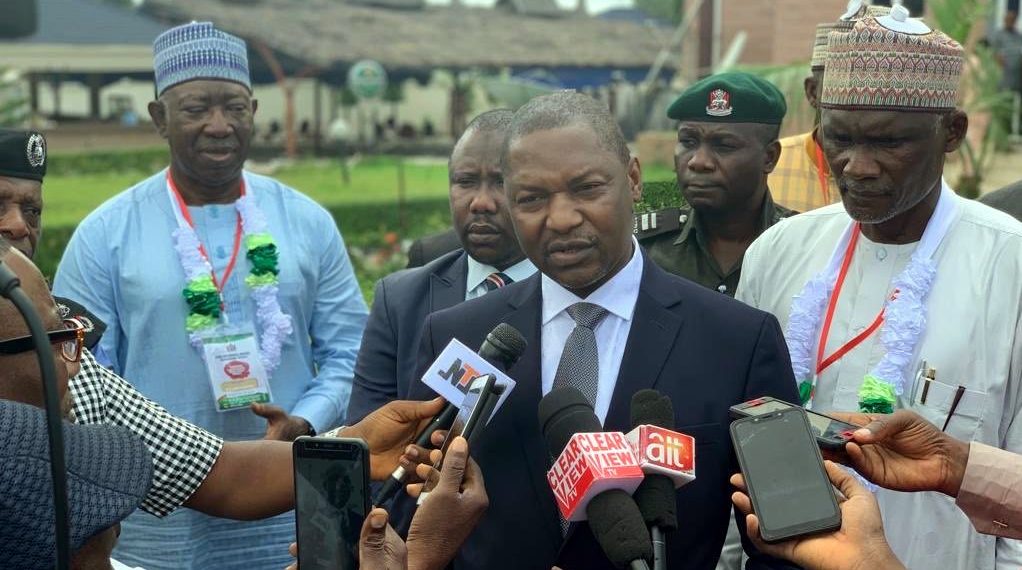 Mr Malami had in 2020 singlehandedly amended the provisions of the Rules of Professional Conduct (RPC) for lawyers behind the General Council of the Bar.

The Federal High Court in Abuja, on Wednesday, nullified the unilateral amendment of the Rules of Professional Conduct (RPC) for legal practitioners in Nigeria by the Attorney-General of the Federation (AGF), Abubakar Malami.

A former vice-president of the Nigerian Bar Association (NBA), Monday Ubani, filed the suit challenging the amendment of the rules of professional conduct for lawyers by Mr Malami.

Mr Malami had in 2020 singlehandedly amended the provisions of the Rules of Professional Conduct (RPC), expunging the mandatory use of NBA stamp and seal for lawyers. He also removed the provisions requiring lawyers acting for the government, ministries or corporations to pay Annual Bar Practising fees.

The stamp and seal, by the rules, is required to be affixed to any document signed by lawyers for such document to be accorded a recognition with lawyer’s imprimatur.

Apart from helping to check quackery, the stamp and seal is also a major source of revenue for the NBA, besides the practising fees paid by lawyers.

Lawyers had criticised the AGF’s action expunging the relevant provisions from the rules, saying it is an attempt to weaken the NBA.

Some members of the NBA had pulled out to form the New Nigerian Bar Association (NNBA) due to allegations of partisanship and poor welfare of members.

But, in the suit filed by Mr Ubani alongside other lawyers including Okoro Nkem, Clement Chukwuemeka and seven others, the plaintiffs challenged Mr Malami’s powers to “unilaterally make and or amend the rules of professional conduct for lawyers.”

In his judgement on Wednesday, the judge, Donatus Okorowo, declared the AGF’s amendment of the rules “illegal and invalid.”

Mr Okorowo held that the AGF lacked the power to alter the rules.

In dismissing the objection, the court declared that the General Council of the Bar which has the authority to amend the RPC is constituted by several members, and the RPC cannot, therefore, be legitimately amended by the singular desire and action of an individual.

Mr Malami, trustees of the NBA, and the General Council of the Bar were listed as defendants.

The plaintiffs questioned the powers and responsibility of Mr Malami to unilaterally alter, amend and or make any rules of professional conduct, without a proper meeting of the General Council of the Bar, duly convened.

They prayed the court to declare Mr Malami’s amendment as unlawful and unconstitutional.

Part of their prayers included an order “declaring the unilateral amendment and the gazetting, of Rules, 9(2),10,11,12 and 13, of the Rules of Professional Conduct for Legal Practitioners 2007,on the 3rd of September 2020, via the statutory instrument No 15 of 2020, by the 1st Defendant herein, as illegal, unlawful, unconstitutional and therefore null and void and of no effect whatsoever.”

Also, they sought an order restraining the AGF “whether by itself in its official capacity or personal capacity, its agents, servants, employees, or howsoever and by whatever name called, from unilaterally altering, amending and or making rules of professional conduct for Legal Practitioners in Nigeria”

They argued that given the clear and unambiguous provisions of sections 1(1&2), and 12(4) of the Legal Practitioners Act, the AGF cannot unilaterally amend or make rules of professional conduct for lawyers.

But the AGF had argued that the NBA lacked the power to file the suit.

Mr Malami had argued that the amendment was made in the exercise of the powers conferred on him by Section 12(4) of the Legal Practitioners Act as Attorney-General of the Federation and Minister of Justice and President of the General Council of the Bar.

The amendment was immediately criticised by many lawyers with the NBA contending that the AGF acted beyond his powers in amending the law which was the prerogative of the General Council of the Bar (GCB) of which Malami is a member.

The body also pointed out that no Attorney-General can unilaterally, whimsically, or capriciously amend the rules, no matter how well-intentioned.

In the amendment, provisions relating to the Nigerian Bar Association (NBA) “Stamp and Seal” as well as Bar Practicing Fees (BPF) for government lawyers were said to have been deleted.

In essence, Rules 9 (2), 10, 11, 12, and 13 were affected by the new amendment. Prior to the amendment, Rule 9(2) prohibits any legal practitioner from claiming that he has paid his Bar Practicing Fees (BPF) when he is actually in default. Rule 10 deals with stamp and seals.

In a letter dated 15 September 2020, and addressed to Mr Malami, the President of the NBA, Olumide Akpata, asked the AGF to rescind the controversial amendments made in the Rules of Professional Conduct (RPC).

Apata said “the RPC or amendments to it may only be enacted and issued after they have been duly approved at a properly convened meeting of the bar council.

He added that a number of provisions aimed at checking the infiltration of quacks into the profession and protecting the revenue of lawyers have been deleted without proper consideration.

“It is therefore concerning that these or many of which are forward-looking and seek to place the Nigerian legal profession at par with other self-regulatory professional associations around the world, will be targeted for deletion,” he said.

The president also noted that although some of the provisions of the RPC are outdated, his administration is making efforts to make necessary amendments in the proper way.