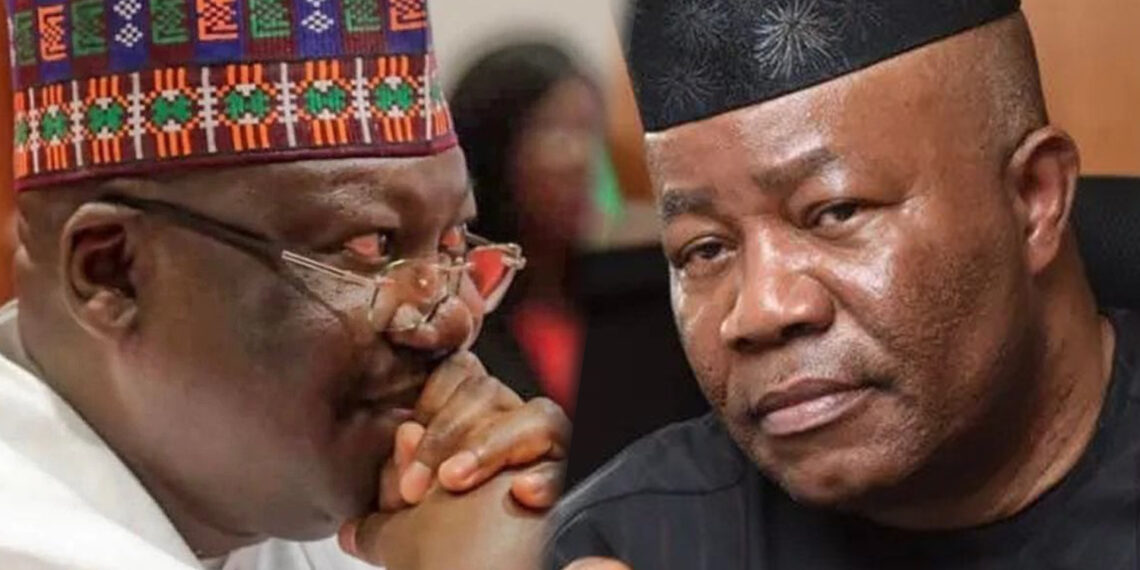 Names of the duo were missing from the list of successfully nominated candidates submitted to INEC by the 18 political parties in June.

Having lost out in their quest for the 2023 presidential ticket of the ruling All Progressives Congress (APC), Messrs Lawan and Akpabio have been making efforts to claim the senatorial tickets of the party for the Yobe North and Akwa Ibom North West Senatorial Districts, respectively.

While Bashir Machina and Udom Ekpoudom had emerged as candidates in the primaries supervised by INEC officials in their respective senatorial zones, the names of Messrs Lawan and Akpabio, who did not participate in the elections were instead forwarded to the commission as candidates.

The acceptance of names were justified by the Akwa-Ibom INEC REC, Mike Igini, but the ultimate decision currently rests with the court.

“INEC has no powers to reject names sent by political parties. Primaries are the sole prerogatives of parties. INEC’s responsibility is merely to monitor the primaries and make sure they abide by their own regulations, the Electoral Act & the Constitution,” Mr Igini said in a report published by PREMIUM TIMES.

However, a media report on Tuesday said INEC had backdated Certified True Copies of reports of the All Progressives Congress (APC) primaries “to accommodate” Messrs Lawan and Akpabio..

Although Mr Akpabio had won a rerun held in the zone, there is no report of a similar election held in Yobe where Mr Machina in Yobe emerged the winner.

We didn’t backdate any documents – INEC

In a statement by its spokesperson, Festus Okoye, on Tuesday, INEC denied doctoring or certifying any document in favour of either of the two APC chieftains.

The commission said it had followed through its timetable and there was no point in its schedules where the names of the persons in question were published.

“The forms of the two personalities in question were not published by the Commission. The decision of the Commission triggered legal actions which are still ongoing. It therefore defies logic and common sense to go around and submit doctored documents purportedly recognising the duo as candidates when the matter is clearly sub-judice,” the statement said.

Mr Okoye said the copy of the form uploaded on the online news platform as evidence, was not properly fact-checked and had thereby encouraged misinformation.

“As part of the ongoing case in Court, a law firm requested the Commission for a Certified True Copy (CTC) of the Form EC9 submitted by the All Progressives Congress (APC) as its candidate for Akwa Ibom North West Senatorial District which we are duty bound to oblige them under the law. The Form was certified on 15th July 2022. If minimum care had been exercised by the promoters of the story, they would have seen the two stamps of the Commission bearing different dates on the Form. It is this Form that is now misconstrued as INEC’ s endorsement.

“For the record, the Commission has not recognised any of the two personalities as a Senatorial candidate,” Mr Okoye further explained.

He called for responsible reporting of the development just as he described the story by the online platform as an unwarranted attack on the electoral body.