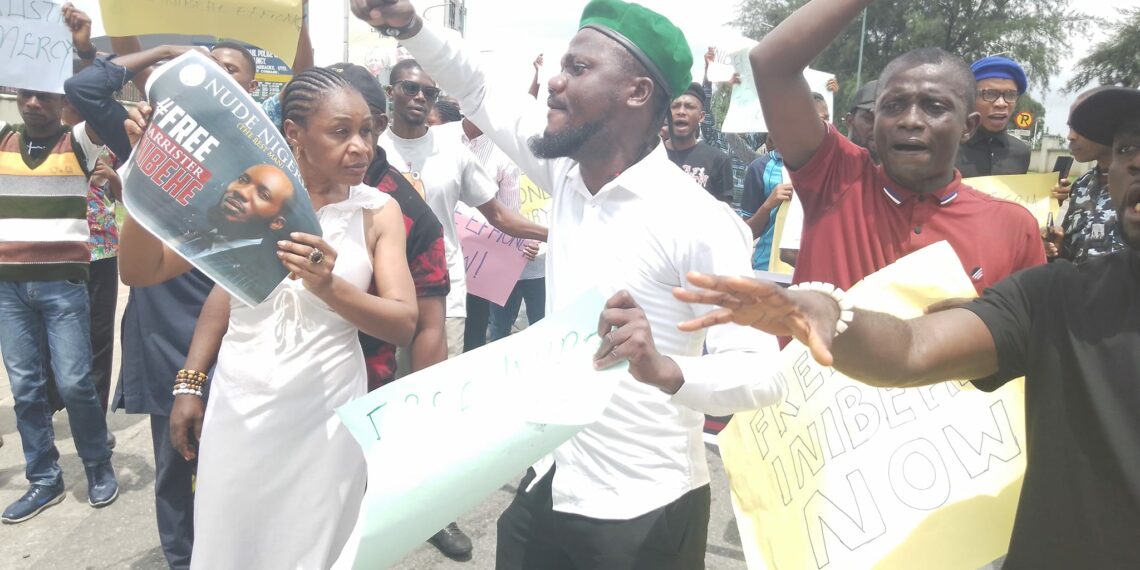 A combined team of police officers barricaded the entrance of the complex and prevented the groups from going inside.

Activists from different groups on Friday staged a protest in Uyo, Akwa Ibom State, demanding the release of the rights lawyer, Inibehe Effiong.

Mr Effiong was committed to prison last week by the Chief Judge of Akwa Ibom State, Ekaette Obot, for alleged contempt of court.

The protesting groups include the Citizen Liberation Movement, the National Association of University Students, the Akwa Ibom Chapter, and the Youths Representative from Itu Local Government Area in the state.

The leader of one of the groups, Ofonime Honesty, told PREMIUM TIMES, that the protesting groups marched from Ikpa Road, where the University of Uyo is, to Wellington Bassey Way – where the judiciary headquarters is.

A combined team of police officers barricaded the entrance of the complex and prevented the groups from going inside.

The leader of the police team reportedly thanked the protesters for their orderly conduct and warned them against allowing hoodlums to infiltrate their ranks.

Mr Honesty, who is a journalist in the state, told our reporter that the police team leader who told them that the chief judge was not available to address them, however, promised to deliver their message to her.

Mr Effiong’s detention, on the order of Mrs Obot, has attracted condemnations across Nigeria.

Several groups, including the Nigerian Bar Association (NBA), have picked holes in the procedure adopted by Mr Obot in jailing the lawyer.

The NBA president, Olumide Akpata, said the judge denied the rights lawyer a fair hearing before committing him to 30 days in prison.

“In view of the foregoing and depending on the outcome of our investigations, the NBA may be forced to take this matter up with the National Judicial Council,” Mr Akpata had said.

Mrs Obot had on 27 July sent Mr Effiong to prison while the lawyer was appearing before her to defend his client in a defamation case.

The client, Leo Ekpenyong, is the defendant in the defamation suit filed by the Akwa Ibom State Governor, Udom Emmanuel.