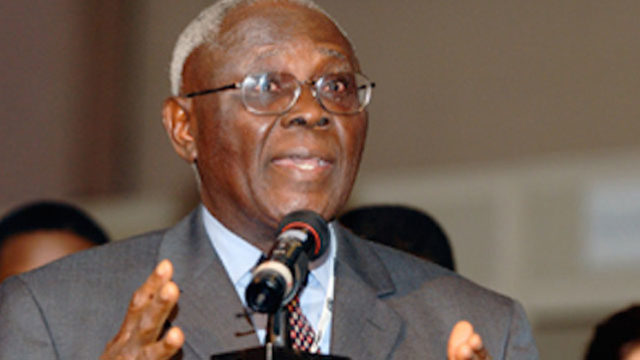 Mr Mabogunje’s daughter and former acting Vice-Chancellor of the University of Lagos (UNILAG), Akoka, Folasade Ogunsola, confirmed the development to PREMIUM TIMES in a telephone interview on Thursday.

She said the nonagenarian passed on Thursday in his sleep.

“Yes, I can confirm it. Baba died in Lagos in his sleep this morning,” Mrs Ogunsola, a Professor of Medical Microbiology, said on the phone.

Also, in a short statement credited to the National President of Ibadan Grammar School Old Students’ Association, Oladimeji Mako, members of the association were also notified of the passing of the nonagenarian.

The deceased, who hailed from Ijebu-Ode, Ogun State, marked his 90th birthday on 18 October, 2021.

He was a lecturer at the University of Ibadan (UI), Oyo State, until 1981, when he retired, and established PAI Associates, and later Development Policy Centre. He did all these in partnership with his friend and colleague, Ojetunji Aboyade.

His works were said to have focused on contemporary geographical issues of rural-urban migration, urbanisation, development and environmental challenges facing Nigeria and Africa.

An associate of Nigeria’s former President Olusegun Obasanjo, Mr Mabogunje was said to have served both the university and Nigeria in various capacities including his contributions to the creation and beautification of the country’s Federal Capital Territory (FCT), Abuja.

In 1999, Mr Mabogunje became the first African to be elected as a Foreign Associate of the United States National Academy of Sciences, and also served as member of the Federal Public Service Review Commission in 1972 and as Chairman of Nigerian Council for Management Development in 1976.

He was also the Pro-Chancellor and Chairman of Council, Ogun State University (OSU) and now Olabisi Onabanjo University (OOU), Ago-Iwoye.