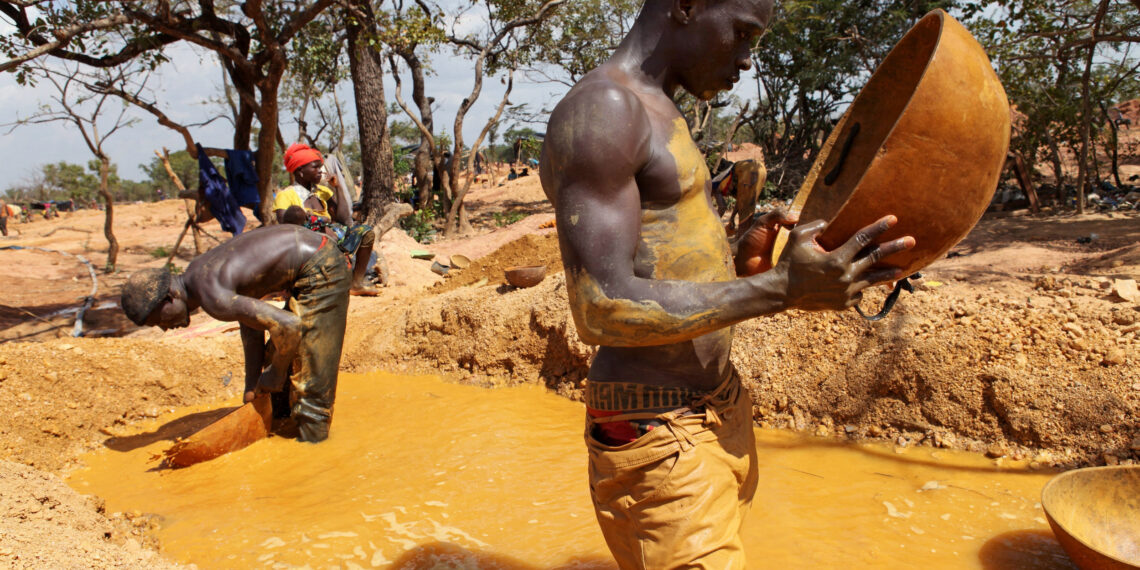 A gold miner pans for gold in Koflatie, Mali, on October 28, 2014, a mine located a few miles from the border with its southwestern neighbour Guinea. Practiced for centuries, traditional gold panning has in recent years increased following the 2012 Tuareg rebellion, attracting many unemployed Malians to take to gold prospecting in the west of the country. Despite living conditions and hard labor, women and men are trying their luck in the Koflatie. AFP PHOTO / SEBASTIEN RIEUSSEC (Photo by Sebastien RIEUSSEC / AFP)

West Africa’s lucrative gold trade has a costly dark side. Discrepancies in data on gold production and trade between Mali and Dubai in the United Arab Emirates (UAE) expose a massive illegal business, particularly in the artisanal mining sector. These illicit dealings not only strip West African countries of billions of dollars but fuel conflict through the financing of violent extremism.

Rising global gold prices have attracted significant interest in the metal’s extraction from local and international investors, especially in rural small-scale mining. Mali is Africa’s third biggest gold exporter, and around a third of its total production comes from artisanal mining. In 2016, the country exported 67 tonnes of gold valued at $2.2 billion. Of that, 46.9 tonnes were mined by industrial producers, with the remaining 20.1 tonnes extracted through artisanal means.

Mali taxes only the first 50 kg of gold exported per month, incentivising gold smugglers to ship the metal from Mali for a large tax break. This makes the country a magnet for the illegal gold trade in West Africa, which lacks a regional tax coordination framework.

Mali is also used as a gateway to UAE gold markets by its neighbours and beyond. Libya and Venezuela recently used Mali as a platform to export their gold illegally to Dubai. In 2020, gold trafficking to Mali apparently brought in about $1 billion to the government of Nicolás Maduro in Venezuela.

Armed groups and terrorists in Africa are also using the illegal gold trade with Dubai to finance their activities, an anonymous expert on Africa’s gold trade told the ENACT project. In 2021 two terrorist groups engaged in a fierce battle to control gold mining sites in Mali’s Gourma region. And Swiss company Valcambi sourced significant quantities of the metal from Kaloti, a Dubai gold smelting firm, which was likely linked to armed groups in Sudan in 2012.

Gold illegally traded between Mali and Dubai is hand-carried by couriers transporting an average of 10 kg per trip. Flights between Mali and Dubai cost around $500, the equivalent of about 10 g to 12 g of gold, making a single trip profitable. Some traffickers move up to 40 kg of gold to Dubai every week. This is facilitated by corrupt airport staff, such as customs officers and police authorities in Bamako.

In the UAE, legal loopholes, weak import procedures and questionable practices by UAE-based buyers and the Dubai Multi Commodities Centre (DMCC) facilitate illegal trade. For instance, passengers arriving in the UAE are exempted from customs declarations for gold carried in hand luggage. So smugglers coming from Mali to sell their wares in Dubai’s Gold Souk need only present buyers with the UAE customs form that simply proves ‘the gold was legally declared to customs officials.’

There are also problems with how the DMCC traces the origin and supply chain of gold brought into the country. UAE customs don’t require information about the gold’s origin. Most of the illegally traded gold is sold first in the Dubai Gold Souk and then onward to refineries and jewellers. The identity of foreign firms purchasing the metal from Dubai-based refineries is unknown.

Moreover, auditing of the DMCC is reportedly weak. Ernst & Young has been accused of ‘unlawful, unprofessional and unethical’ conduct over its relationship with the commodities centre. The accounting firm is believed to have helped an Emirati gold refiner rewrite its compliance report for the DMCC to modify the audit findings.

Because many West African artisanal miners struggle to finance their activities, they take loans from Emiratis that can only be paid back through exporting their gold to the UAE. This isn’t necessarily illegal, but most of this gold is probably exported through illicit channels.

Mali and the UAE must strengthen both domestic strategies and procedures, and bilateral and regional cooperation to close the gaps that enable the illegal gold trade. Dubai’s airport authorities need to closely control and monitor the hand-carried gold arriving from Mali and Africa. Travellers must provide genuine certificates authenticating the country of origin and tax receipts in the exporting country.

Mali’s tax incentives are attractive for neighbouring smugglers. West African states should harmonise their tax policies and regulations on gold, starting with better coordination among countries in the Economic Community of West African States. Smugglers would then have fewer commercial route opportunities.

Finally, traceability is difficult because of the informal nature of artisanal mining. One way to fix this is to identify all actors in the trading chain. Because most illegally traded gold from Mali is sold in the Dubai Gold Souk and then onward to refiners and jewellers worldwide, buyers’ identities should be revealed. International political and economic partners should pressure UAE authorities to be more transparent in this regard.

ENACT is funded by the European Union and implemented by the Institute for Security Studies and INTERPOL, in affiliation with the Global Initiative against Transnational Organised Crime.