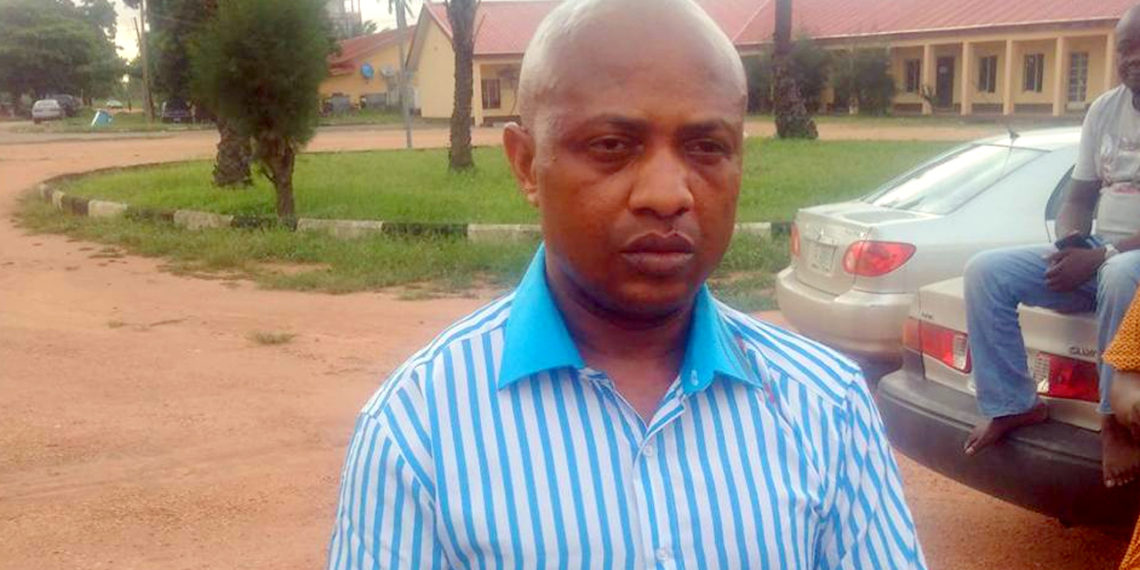 “I saw the defendant (Evans) for the first time at a police station. I have never conspired with anyone to kidnap in my entire life."

A dismissed soldier, Victor Aduba, on Monday, denied being an accomplice to the crimes of alleged kidnap kingpin, Chukwudimeme Onwuamadike, alias Evans.

Mr Aduba, a co-defendant, made the denials during the resumption of the trial at an Ikeja Special Offences Court in Lagos while being led in evidence by his defence counsel, Emeka Ochai.

The News Agency of Nigeria (NAN) reports that Evans is standing trial alongside Mr Aduba, an ex-soldier, for kidnapping a businessman, Sylvanus Ahamonu, and collecting a 420,000 dollars ransom from his family.

They are facing a four-count charge bordering on kidnapping and unlawful possession of firearms.

Mr Aduba told the court that he was a Secondary School Leaving Certificate (SSCE) holder and lived in Ojoo Military Cantonment.

He said he was arrested in respect of the alleged kidnap case on June 24, 2017. He vehemently denied knowing Evans prior to his arrest.

“My lord, I have never been involved in any kidnapping.

“I saw the defendant (Evans) for the first time at a police station. I have never conspired with anyone to kidnap in my entire life,” he said.

The dismissed soldier testified before the court that he got acquainted with one Chukwuma Nwosu at a park in Anambra on his way to Lagos after the military approved his leave to celebrate Christmas with his family in Onitsha.

“After the Christmas, while waiting to board a car to Lagos, I was on my military camouflage when one Mr Chukwuma Nwosu met me and offered to give me a lift to Lagos because of the military regalia.

“He told me he was also going to Lagos. On our way, we passed through many checkpoints but we were not stopped because I was in my full regalia.

“We exchanged phone numbers and he said he will let me know anytime he wants to travel so that I can accompany him. He also said that he has a truck that LASTMA usually extort him whenever it spoils on the road and that he will need my assistance.

“Since then, he has travelled three times and whenever we get to Lagos, he gives me N20,000 and buys drinks for me at the bar,” Mr Aduba said.

The defendant further said that he got a call from Mr Nwosu on June 24, 2017, to meet him in a bar which led to o his arrest.

“When I got to the bar, Nwosu told me not to worry about anything. He said they forced him to call me. As I was about to ask him who forced him, five men approached us and they told me I was under arrest. I struggled with them but they overpowered me and took me to the station.

“I was in the cell for eight days. One man met me in the cell and told me to give him my personal information and I did. Five days after that, he came back to the cell and took me to the counter and I met the five other men.

“They brought out a paper and they told me to sign. I asked if I can go through the papers before I can sign but they said no.

“One of the men, Mr Idowu Haruna, suddenly gave me a dirty slap. They later took me to a place called theatre (torture room). As they were torturing me, Haruna injured me with a cutlass on the hand.

“Their boss, Phillips, ordered them to stop and they took me back to the cell. A day later, they chained me and they told us to enter a white bus.

“After a while, they took me back to the cell. Three days later, one fib, one of the men who came back to meet me in the cell, again told me to sign some papers. I told him they should allow me to speak with my family to inform them of my whereabouts but he refused.

The witness further said that Mr Kyari spoke with Mr Haruna on the phone for a few minutes before he hung up, adding that he succumbed to signing the papers after Mr Haruna showed him the picture of three dead men, including the picture of Mr Nwosu.

“I saw the corpse of three men on his phone, including the picture of Nwosu. I  was forced to sign the papers because I was scared.”

During cross-examination by the state prosecutor, Yusuf Sule, the defendant told the court that he completed secondary school in 2008 and was enrolled in the military on August 15, 2009.

He said he spent eight years in the military before his arrest.

He added that he had never gone to the war front and he was in the music department of the Nigerian Army.

“I do not have any document to show that I was tortured because they did not care about my life and I did not see any sign that there was a “theatre” in the cell but their boss said they should take me to a theatre.

“The only thing  I told the police was my personal information and my family information. I did not know where they got the information that I signed on from.,” he said.

NAN reports that Justice Hakeem Oshodi of an Ikeja High Court had on February 25 discharged and acquainted Mr Aduba in another kidnap case alongside Evans for lack of sufficient evidence linking them to the crime.

Evans had on February 4 denied kidnapping Mr Ahamonu and collecting a 420,000 dollars ransom from his family.

Sylvanus and his wife, Chimebere Ahamonu, on December 17, 2021, testified virtually about how Evans and his gang kidnapped him on June 23, 2014, on Kara Road off Osolo Way, Ajao Estate, Lagos.

The couple narrated how they sold properties, borrowed money, and raised funds from family and well-wishers to attempt to raise the initial two million dollars ransom that was demanded by Evans.

Sylvanus whose hands and legs were chained throughout his two months in captivity was only released when the family allegedly gave Evans 420,000 dollars ransom and he was at the point of death.

Justice Oluwatoyin Taiwo adjourned the case until August 25 for the parties to adopt their final written addresses after the defence had closed its case.