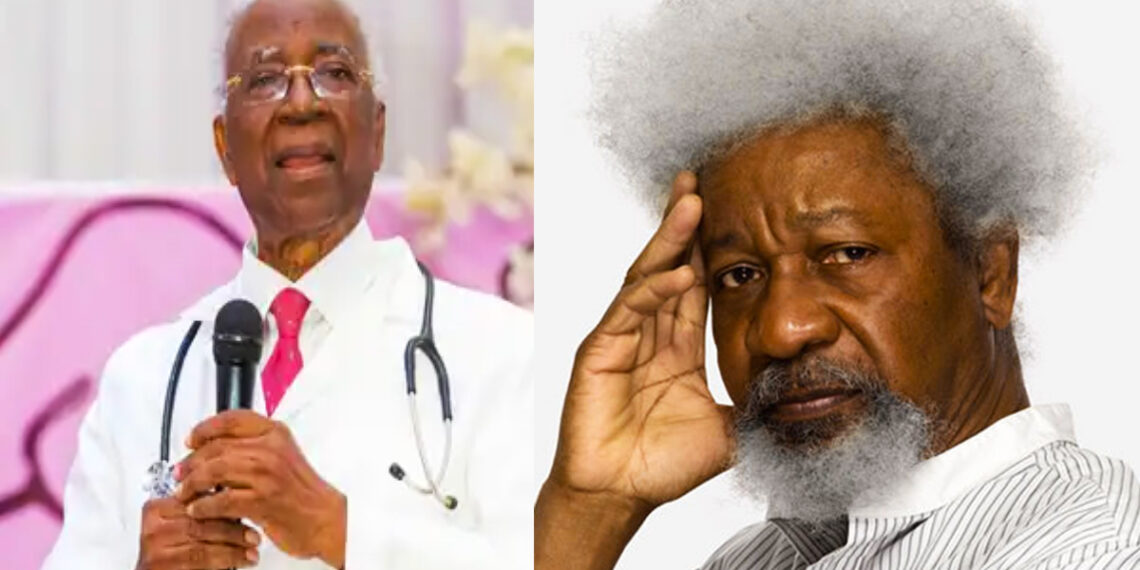 "Ogun is proud to have a son who studied a language, and began to teach the owners of the language the language..."

Governor Dapo Abiodun of Ogun State has described Wole Soyinka as the rarest breed of mankind, as the Nobel laureate clocks 88.

In a statement on Tuesday, Mr Abiodun said Mr Soyinka deserves to be celebrated for conquering the world as a playwright, essayist, poet, and public intellectual “of prodigious hues.”

In the statement, Mr Abiodun also hailed Theophilus Ogunlesi, the first professor of Medicine in Nigeria. Mr Ogunlesi was 99 on July 11.

He noted that Mr Ogunlesi pioneered research on tropical medicine and mentored the earliest generations of orthodox medical practitioners and researchers.

Read the press release below:

As the world-renowned playwright and Nobel Laureate prize winner in Literature, Professor Wole Soyinka clocks 88 years, the Ogun state governor, Dapo Abiodun, has described him as a rarest breed of mankind and one who has straddled planet earth with exceptional candour.

Gov Abiodun similarly described the doyen of Medicine in Nigeria, Professor Emeritus Theophilus Oladipo Ogunlesi, who trained many other professors and medical experts in Nigeria and abroad as a rare gift to the nation and the medical profession across the world.

Prof Ogunlesi became a medical doctor in 1947 and the first Professor of Medicine in Nigeria in 1965. The medical genius who was born to a blacksmith father in Sagamu turned 99 yesterday.

Abiodun eulogised both scholars as living legends, and two of the most iconic avuncular pathfinders and evergreen brand ambassadors not only for Ogun state but Nigeria and Africa

He further described them as flag bearers of banner of excellence for whch Ogun is revered among the comity of states in Nigeria.

Abiodun noted that Soyinka deserves to be celebrated as he had distinguished himself as the conscience of the nation, conquered the world as a playwright, essayist, poet and public intellectual of prodigious hues.

“Professor Wole Soyinka, an emeritus Professor of Comparative Literature and the Black race’s first Nobel Laureate in the Arts of Beautiful Letter (Literature) means many things to different people. To the literary world and the academia, he is celebrated as Kongi, the wordsmith. To the dictators and enemies of democracy, he is a fiery civil fighter. To lovers of democracy, he represents the best in the promotion of people’s rights and good governance, while he remains a father, husband, leader, mentor, hunter and connoisseur of best brewed wine to his buddies.

“I have read so many books in the three genres of literature; drama, poetry and prose. The Lion and the Jewel; The Jero Plays; A Play of Giants; Death and the King Horseman; Madmen and Specialist; The Strong Breed; A dance of the Forest; The Forest of a Thousand Demons; A collection of Black African Poetry and, if you like depending on which divide you are, The Man Died and so on. All these literary pieces are Kongi’s footprints in the literary world. But very importantly, these pieces are not just pleasure reads; they are evergreen works of arts and commentary of our religious, political and economical existentialism and essentialism as humans.

“Today, the entire World celebrates Professor Wole Soyinka at 88. The Government and the entire people of Ogun State celebrate intellectual accomplishment, integrity, civil liberty defence and so on. And, if Nigeria celebrates our fledgling democracy, Wole Soyinka remains one of the planters of the seed which has grown to bear the bountiful harvest of people-oriented good governance”, Abiodun stated in the tribute.

The governor, however, declared that his administration would ensure that the gospel of a free, fair, just and egalitarian society that provides a conducive environment for individual prosperity and growth; and development of humanity in general, that Soyinka preaches is not lost on it.

“Since inception of our Administration on 29th May, 2019, we have continued to provide an environment that engenders continued development of our dear State, and increased prosperity for all the people and all those who have made our dear State their home, irrespective of their geographical location, gender, religious or political affiliation, ethnicity or social stratifications. These are all ideals which Soyinka craved for.

“We will continue to celebrate WS as our Administration puts in place a structure of good governance which is people-centered; committed to a free, fair and just society which promotes equity, fairness and justice to all the people. We believe this is the best way to celebrate our own Oluwole Akinwande Babatunde Ishola Soyinka. The best reward for this freedom fighter is that he should also witness and enjoy the fruits of the hard-won war for a better Nigeria and greater humanity.

“Professor Oluwole Akinwande Soyinka, Kongi, the Lion, the Tiger that needs not proclaim his tigeritude, our own WS; today, on behalf of the Ogun State government and the entire people of Ogun State, I wish you a Happy 88th Birthday.” Abiodun submitted.

For Prof. Ogunlesi, Abiodun noted how he pioneered research on
Tropical Medicine and mentored the earliest generations of orthodox medical practitioners and researchers.

He prayed for good health for the legends and thanked them for their contributions to the body of knowledge and national development.

Profiles of ‘VIP’ inmates in Kuje prison before attack