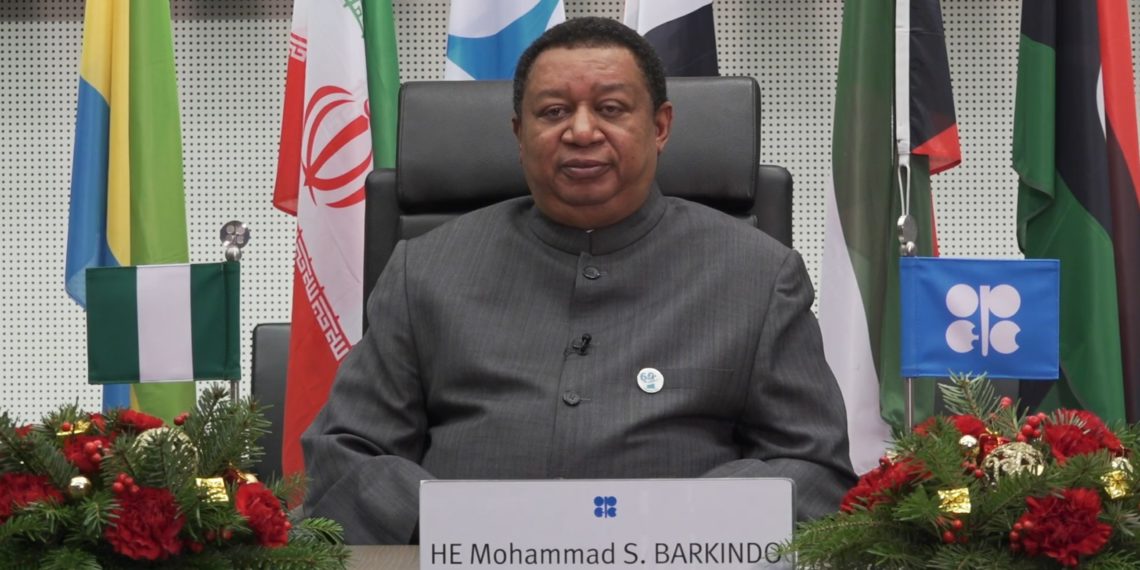 Mr Barkindo will be buried in his home town in Yola, Adamawa State, on Wednesday.

The Organisation of Petroleum Exporting Countries (OPEC) on Wednesday mourned the demise of its outgoing secretary-general, Mohammad Barkindo.

63-year-old Mr Barkindo died at about 11p.m on Tuesday.

His demise was announced by Mele Kyari, the Group Managing Director of the NNPC Limited in the early hours of Wednesday.

Mr Kyari confirmed that Mr Barkindo will be buried in his home town in Yola, Adamawa State, on Wednesday.

Earlier on Tuesday, he held a meeting with President Muhammadu Buhari during which he announced that his six-year tenure as OPEC scribe was coming to an end.

At that event, Mr Buhari thanked him for being a worthy ambassador of the country.

The president also directed the Ministry of Petroleum Resources and the Nigerian National Petroleum Company (NNPC) Limited to mobilise the oil and gas industry to organise a befitting welcome reception in his honour when he finally returns home.

OPEC in a statement on Wednesday described Mr Barkindo’s death as a tragedy and a great loss to the energy and oil community in Nigeria and across the world.

“It is with immense sorrow and sadness that the OPEC Secretariat learnt of the passing of the OPEC Secretary-General, His Excellency, Mohammad Sanusi Barkindo, in his home country of Nigeria,” the oil cartel said in its statement.

” He was the much-loved leader of the OPEC Secretariat and his passing is a profound loss to the entire OPEC Family, the oil industry and the international community.

“OPEC extends its deepest condolences to his family, friends, colleagues, loved ones and his home country, Nigeria. It is a day in which words are not enough, but it is also important to express our deep gratitude for the over 40 years of selfless service that HE Barkindo gave to OPEC. His dedication and leadership will inspire OPEC for many years and decades to come.

“Throughout HE Barkindo’s long career, there have been several central themes that have driven him: an infectious passion for the petroleum industry; an unwavering belief in oil’s poverty eradicating potential; a steadfast commitment to sustainable development; the importance of dialogue and multilateralism; and, most fundamentally of all, treating everyone with respect and kindness.

“As OPEC Secretary-General, a position he assumed on August 1, 2016, HE Barkindo was a visionary leader and an eloquent communicator who played a key role in forming the historic Declaration of Cooperation at the end of 2016. He served the Organization with great distinction and helped it successfully navigate through two major industry downturns (2015-2016 and 2020-2021), was instrumental in the setting up of the Charter of Cooperation (CoC), and was a consummate diplomat in further advancing dialogue and cooperation with a variety of industry stakeholders.”

OPEC said that dspite the attainment of so many heights in his career, Mr Barkindo remained a selfless man of great humility and decency who treated everyone, irrespective of rank or office, with dignity and courtesy.

The oil cartel described the late scribe as a trailblazer widely admired and respected throughout the globe.

“To those who were fortunate enough to know and work alongside him, they will miss his warmth, kindness and sense of humour. His example of dedication and duty will inspire future leaders in the industry,” the statement said.

“To the last, he was always true to his respectful nature, always there to listen, offer guidance and show leadership; a genuine OPEC icon. His last words to friends were that he was happy to have concluded his tenure as Secretary-General, he had served the best he could, and that he was proud of those who had served with him.

“HE Barkindo elevated the Organization’s position and role as an active and responsible partner in the oil industry and international community through both his deeds and words. Given his scholarly nature, and the fact that his speeches regularly used quotes to emphasize points and opinions, it is perhaps apt to leave the final word to one of Barkindo’s favourite scribes, the famous poet, Jalal ad-Din Muhammad Rumi.