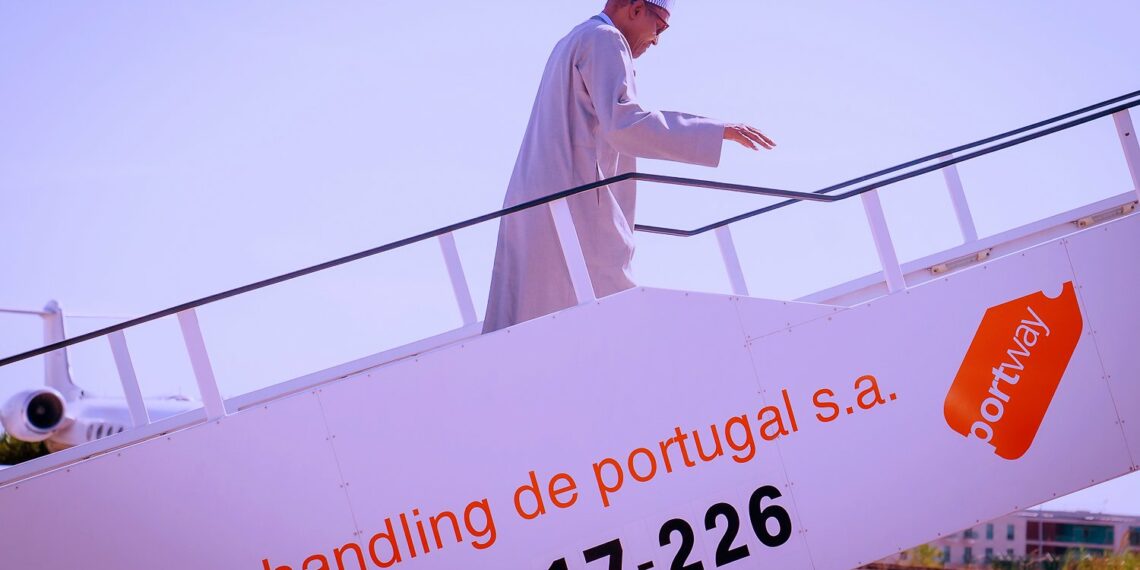 Mr Shehu listed the real determination of the two countries -Nigeria and Portugal- to forge a close relationship as one of the major outcomes of the visit.

The presidency has released 10 takeaways from President Muhammadu Buhari’s recent visit to Portugal.

Garba Shehu, spokesperson to Mr Buhari, on Sunday, in a statement said the President’s visit between June 28 and July 2, was a first class story, which is measurable by outcomes.

Mr Shehu listed the real determination of the two countries -Nigeria and Portugal- to forge a close relationship as one of the major outcomes of the visit.

TEN TAKEAWAYS FROM STATE VISIT TO PORTUGAL: TWO NATIONS AND THE WILL FOR STRATEGIC PARTNERSHIP

President Muhammadu Buhari’s State Visit to Lisbon, Portugal, Wednesday 28th June to 2nd July was a first class success story and this is measurable by outcomes, not least, the real determination of the two nations to engender a close relationship.

Many in Nigeria remember that historically, Portuguese sailors were the first in Europe (ahead of British) to have contact with the territory now called Nigeria, when a certain Explorer, Rui de Sequira visited the Lagos area in 1472, actually naming the area around the city as Lago de Curamo, which means Lake of Curamo (Curamo, recall Kuramo Lagoon, Kuramo Beach and Kuramo Hall at the famous Eko Hotel, Lagos).

Among the important things embedded in the vision of Nigeria’s role and place in the world , clearly laid by President Muhammadu Buhari, is the revival of important relationships that have suffered long neglect. In addition, he has a strong willingness to assume the leadership expected from Africa’s largest country in population and economy.

So herein lies the first importance of this visit.

One, there can be no better illustration of the larger strategic goal of the future of this relationship than the eight agreements and Memoranda Of Agreement, MOUs signed in the course of this visit.

These are the MOU on political consultations, diplomatic training, research and exchange of information and documentation; cooperation in the field of culture; in the field of women and girls development, empowerment and gender affairs; youths and in the area of sports.

At the very well attended Portugal and Nigeria Economic Forum with the chosen theme: “Expanding Investment and Trade Between Nigeria and Portugal,” two agreements also were signed, one between the Nigerian Investment Promotion Council and AICEP, its Portuguese equivalent and another between the Nigerian Association of Chambers of Commerce, NACCIMA and the similar body in Portugal.

Two, this visit achieved a desire for a strategic partnership to strengthen the work Nigeria has been praised for doing by all levels of Portuguese authority- President, Prime Minister, President of National Assembly and Mayor of Lisbon-which is her stabilizing role in West Africa and importantly for the hosts, the stability and support of the ex-Portuguese territories in the subregion, specifically Guinea Bissau and São Tomé and Principe. This is resonating very well with the Portuguese.

Three. Invariably linked to this is the convergence of strategic interests and the laying of a framework to strengthen security and cooperation between the two states.

Portugal which has an association with with its former territories in Africa, the equivalent of our own British Commonwealth made up of Angola and Cape Verde in addition to the two others states mentioned. They have troops deployed for safekeeping duty in West Africa. They have committed to support Nigeria in military training, the sharing of intelligence and in the war against terrorism.

Four. Nigeria and Portugal have equally identified a common interest and goal in the transatlantic gas pipeline for which our country needs investment and security. This is with a view to finding a market in Europe for the enormous gas resources available to us. After listening to a briefing on the pipeline by Mele Kyari, the Group Managing Director of the Nigerian National Petroleum Company (NNPC) Limited, President Marcelo de Sousa was quick to show interest in the maritime mapping of the gas pipeline, instead of the Trans Saharan pathway which is equally an option. Portugal, says President Sousa has chosen for itself, the role of the spokesman and defender of African interests in the EU.

Nigerian LNG is important for Portugal especially at this time of the Russia-Ukraine war, and the regime of western sanctions imposed on the Russian supply of oil and gas.

With 60 percent of our LNG going to Portugal, meeting 30 percent of their energy needs, Portugal is today more energy secure than most of their Russia-dependent European neighbours. It is noteworthy that the Portuguese are very appreciative of the consistency and reliability of the gas from Nigeria, thanks of course to good management from NLNG.

Five. The Kano-Maradi railway line being constructed by a Portuguese company, Mota-Engil, is turning out to be a significant factor in the emerging relations between our countries.

Despite President Buhari’s emphasis at several speaking opportunities that the contractor met all requirements to beat others to get the job, the Portuguese authorities see it not only as a milestone in trade relations but also as a trailblazer and a precursor to the evolution of Nigeria as the gateway to the vast African market opened up by the African Continental Free Trade Area, AfCFTA.

President Sousa spoke about their wish for the entry into the Nigerian market of Portuguese companies, “not in 30s or 100, but in their thousands.”

Six, Portugal, which was a strong force in the UN recognition of Nigeria as one of five centres for vaccine production in Africa has determined to key into our health sector. They will come in. It’s a country with a very strong pharmaceutical economy.

Seven, in the choice of Jose Peseiro, the Portuguese coach of the Super Eagles, Nigeria struck yet another positive cord that resonates politically and diplomatically.

Even before the advent of coach Peseiro, there are more than 200 professional football players of Nigerian origin in Portugal.

Some of them were brought to a meeting with the President, coordinated by Chairman, Nigerians in Diaspora Commission (NiDCOM), Hon Abike Dabiri-Erewa. Now, we have a commitment that the country famous for producing Ronaldo, and for its globally recognized football academy is opening up chances for our youth to train.

Eight, there is also a welcome plan to share the achievements of Portugal in the field of renewable energy. With 60 percent of their energy got from renewable sources, that country ranks among the world leaders, hoping to reach carbon neutrality by 2030.

For the Buhari administration, and hopefully for the succeeding ones, the attainment of set climate change objectives will continue as a priority. For our two countries, this will be a win-win.

Nine, we have now an MOU on political consultations, diplomatic training, research and exchange of information and documentation. This will see our two nations working hand in hand at multilateral institutions including the UN. Portugal prides herself with experience in international relations.

Ten. Lastly is the important thing about the very strong alignment of strategic interests of both countries. It’s rare to see this anywhere. The commitment to be with Nigeria is everywhere: All levels of authority in the country: President, Prime Minister, President of the National Assembly, and Mayor of Lisbon showing a total commitment to align with Nigeria. President Sousa in his second term said “I waited six years for this marriage.”

They honored him with that country’s highest national order.

For President Buhari, this visit is an affirmation of the norm that global aspirations must be accompanied by global engagements and a demonstration of his determination to turn commitments into actions.

Hopefully, these will lead to the acceleration of the nation’s economic growth, securing the country, attracting investment and creating jobs.

Garba Shehu is Senior Special Assistant to the President, Media and Publicity.