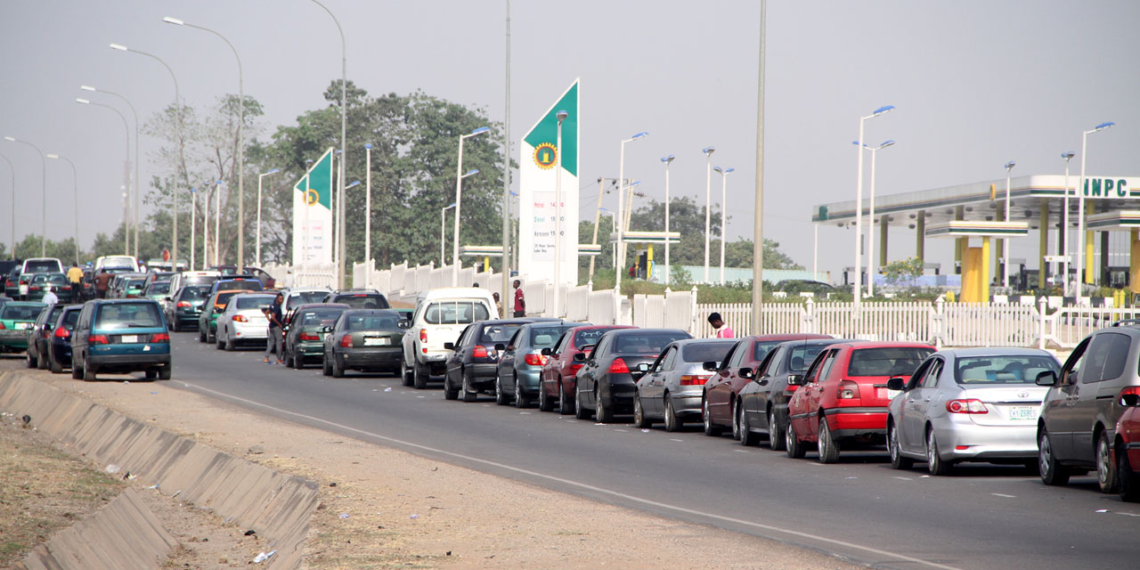 While fuel crisis persists, the government says things are 'getting better'.

Fuel deliveries have risen in Abuja from 70-80 trucks in three days to 140 trucks in response to the government’s offer of additional N10 freight reimbursements to marketers, the government said.

The government announced last week it would pay more to cover the cost of transporting products across the country, amid rising price of diesel, as it struggles to end shortages that have lasted nearly a year.

As Nigerians continue to struggle to get petrol for their cars and generating sets, officials claimed things were getting better.

The chief executive officer of the midstream and downstream petroleum regulatory agency, Farouk Ahmed, who led the team, said: “At least we’re seeing the improvement. Our people were outside. As of today from the authorities alone, we have seven teams that are going around to different locations.”

“We’re trying to monitor the dispensing, first of all, to ensure that all the stations that have fuel are dispensed with all their pumps so that they can reduce the number of the long queues at efficiency in terms of service,” Mr Ahmed said.

“We went to Shafa and Shema along Lugbe airport road. When we got to Shafa they were not selling because they were discharging. At least the good thing is that the queues are not as long as they were yesterday.”

He said the freight increase has impacted positively after marketers warned they could no longer sell at a loss.

“And there’s been a lot of improvement because the average trucking that we received in Abuja in the last three days, was about 140 trucks on average.

“We were receiving like 70-80 trucks. So there’s been a little improvement and credit also goes to the transporter because now they are reacting to Mr President’s offer, which he gave them an additional 10 Naira incentive on transportation charges,” he said.

But motorists said similar upbeat claims by the government in the past had failed to end the crisis.

“I don’t know whether the government or the owner of the NNPC are deceiving people, because every day, they will say they have fuel in surplus but see what is happening here now, some filling stations do not have fuel,” said a driver at Shafa filling station, who gave his name as James.

Mustapha Baba, who was also at the station, said he did not believe the government.

In recent months, fuel scarcity has worsened in Abuja and several other cities across the country.

Although the crisis in Abuja began in 2021 after the government announced plans to remove fuel subsidy, a major shortage hit major cities including Lagos in February, causing queues at filling stations and leaving millions unable to power their cars and generators they rely on for electricity.

The government said the discovery of high amounts of methanol in imported fuel caused the shortage as authorities tried to replace the off-spec product across the country. The crisis lingered for months despite the federal government saying it had sufficient stock of petroleum products for distribution.

The scarcity has continued in Abuja nonetheless and black market sales have thrived with hawkers lining busy roads with jerry cans filled with petrol.

Weeks ago, long queues returned to filling stations in Ogun, Oyo and Ekiti as most of them remained shut due to scarcity of petrol.

Mr Ahmed said the price of petrol has not changed.

“The price is still N165 per litre, the government has not made any decision on that,” he said.

“Mr President, in his wisdom has increased the freight rate for transporters by 10 Naira that is a huge jump from N10.46 Kobo to an additional N10 which amounts to N20.46 kobo and this is just to show that the transporters can still transport the product all across the nation without any loss of revenue to them, which is what they were complaining about.

“So, that’s to say, that the price of N165 is still sacrosanct, nothing has changed from that. So people should not be concerned about whether there is an increase or not, absolutely there is no increase,” he added.

He noted that the authorities have been engaging with the key marketers and have advised them to warn their station managers to stop selling to the black marketers.

“These jerry cans boys are what is causing part of the problem,” he said.

“We are out to show concern of what is happening, We’re not just sitting back and letting it go on like, we have tried to take action. We have warned all the marketing companies, particularly those that are selling over the official price, that they should stop over-selling otherwise we’ll take action against them.”

The NNPC Ltd. executive director, Adeyemi Adetunji, said the corporation had 1.9 billion litres of petrol in stock with the sufficiency of about 32 days.

“Today we have 1.9 billion litres of petrol which is about 32 days sufficiency.

“Lagos is cleared now. And we will just clear Abuja in a couple of days as well,” he said.